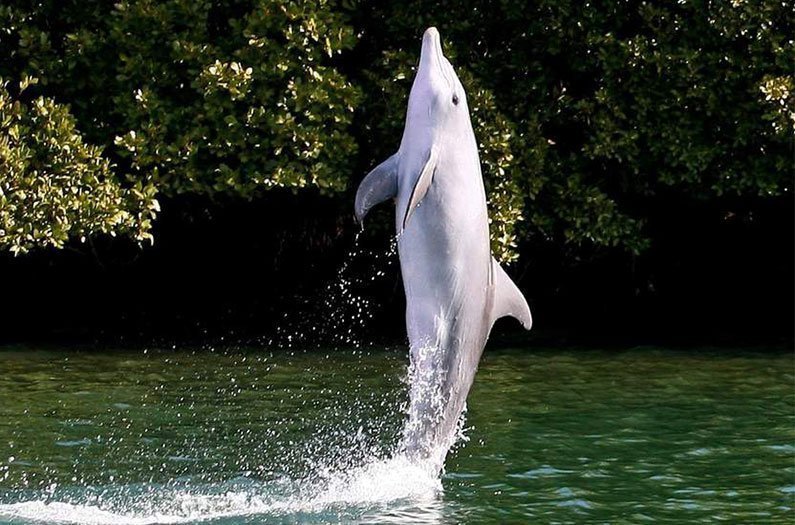 The conservation lesson of dolphins who walked on their tails

In the mid-1990s, people in Adelaide, Australia reported something strange: wild dolphins performing tricks they’d learned from a dolphin who briefly lived at a marine park. It was a lovely example of cultural knowledge transmission in animals — and, say researchers, a lesson in the importance of culture to conservation.
By Brandon Keim
September 5, 2018

Late in 1987, a young female Indo-pacific bottlenose dolphin was found trapped in a harbor of the Port River estuary near Adelaide, Australia. Nicknamed Billie, she was rescued and, prior to her release, lived for several weeks at a nearby dolphinarium; though kept separate from the captives, she had a chance to watch them perform.

Seven years later, people reported something strange: a dolphin surging backwards from the Port River’s waters and briefly “walking” on her tail. Though a standard trick in captive shows, the behavior was unknown in the wild. The dolphin, it turned out, was none other than Billie, who picked it up during her visit to the human world.

Much to the delight of observers, other Port River dolphins eventually started tail walking, too. They learned it from Billie and then from one another. It was a lovely example of cultural knowledge transmission in animals — and, write researchers in the journal Biology Letters, a lesson on the richness of dolphin lives the importance of culture to conservation.

Led by Mike Bossley of the Whale and Dolphin Conservation Society and drawing on thousands of citizen scientist observations, the researchers describe how tail walking was at first seen infrequently. Only Billie and another dolphin, named Wave, did it. After Billie died in 2009, tail walking observations spiked, with Wave performing most of the walks but many other dolphins following suit.

Tail walking peaked in 2011 and then declined. After Wave’s death in 2014 only two tail walkers remained, “both of whom performed the behavior only sporadically,” write Bossley and colleagues. “Tail walking now seems destined to disappear from the community and thus can be considered a dying fad.”

The word fad is important. Cultural learning has previously been observed in dolphins, but it tends to involve behaviors with some obvious biological function, such as using conch shells to catch prey hiding in seafloor mud. Tail walking served no evident purpose. “In human culture, such arbitrary traits can acquire significance as symbolic ethnic markers,” write the researchers.

What the tail walking might have symbolized is an open question. Luke Rendell, a cetacean biologist at the University of St. Andrews and co-author of the study, speculates that Wave’s frequent performances following Billie’s death might have been a display of dominance: once Billie was gone, “Wave became the tail walking queen,” says Rendell, and then the behavior spread, almost like a dance. Or perhaps Wave was trying to process Billie’s death, and the walks became a sort of memorial.

That’s extremely speculative, and Rendell is cautious in his interpretations. “It’s about finding a balance between two different kinds of error,” he says — that of denying the continuity of evolution, and of homogenizing the possibilities of experience by recognizing only our own in them.

More straightforward, though, are the conservation implications. The tail walking trend underscores the tremendous importance of social learning for dolphins; adaptation isn’t just a matter of physical changes or genetic mutations, but learned behaviors. And whereas conservation has focused on physical and genetic traits, says Rendell, it needs to consider culture as well — both because such knowledge is vital to population survival, and because unique cultures are simply special.

“If we applied conservation principles to humans,” Rendell says, “we should ensure we include cultural criteria as well as the genetic differences of various groups.” Indeed many people would consider culture more important.