This is How Much Water It Takes to Produce Energy in the US
New estimates show that the US energy sector withdraws a total of 58 trillion gallons from various sources such as lakes, rivers and underground aquifers. Of the total water withdrawn, the energy sector uses 3.5 trillion gallons of freshwater.
By Prachi Patel
September 6, 2018

How much water does the United States use to produce energy? It’s an amount that has not been estimated in decades, but a new study in the journal Environmental Science & Technology show that the number is huge.

The US energy sector withdrew a total of 58 trillion gallons from various sources such as lakes, rivers and underground aquifers, the analysis finds. That’s enough to fill 88 million Olympic-sized swimming pools.

More than two-thirds of this withdrawn water is used to cool power plants. After cooling, much of the water is returned back to its original source, albeit at a higher temperature so it can impact the environment adversely.

Of the total water withdrawn, the energy sector uses 3.5 trillion gallons of freshwater, which is around 10 percent of total U.S. water consumption, Emily Grubert of Stanford University and Kelly Sanders of the University of Southern California report in the new study.

It is well known that energy and water systems are interconnected. Energy is needed to extract and produce usable water, and the same goes in reverse. But while this water-energy nexus is well known, “there has not been a comprehensive effort to characterize water consumption and withdrawal for the US energy system since 1980,” the authors write. 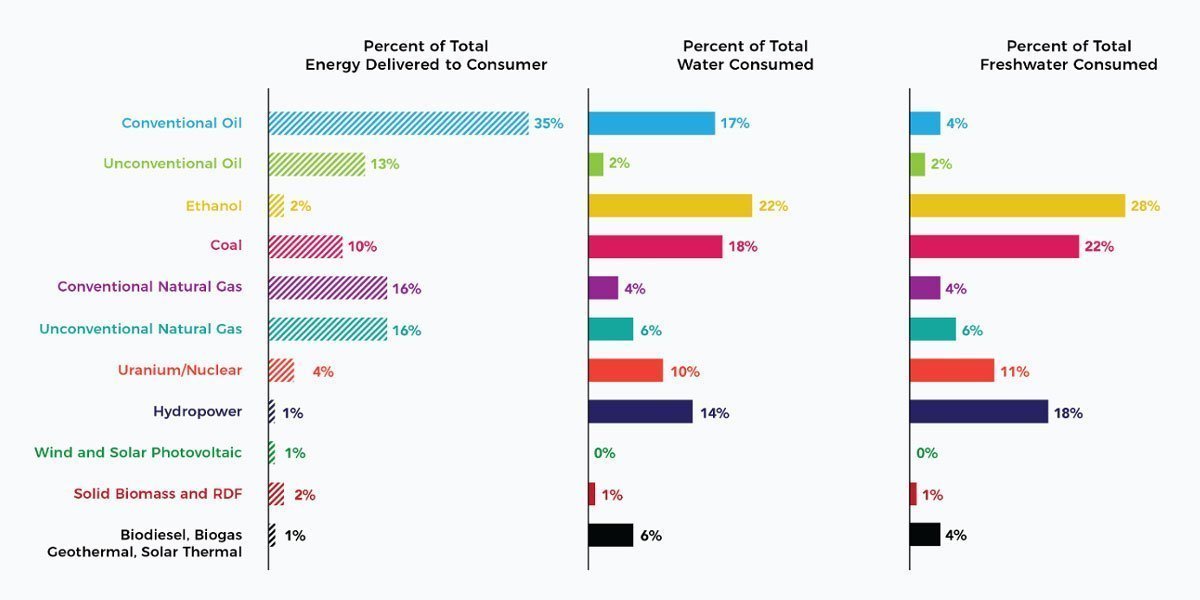 The researchers analyzed the water withdrawn and used by various energy resources: biomass, coal, oil, natural gas, nuclear, hydropower, and renewables. They used data from government reports and individual power plant operators for the year 2014, which is the most recent year for which data was available for all the energy sources. The study covers over 99 percent of the US energy system.

Discover more:  Researchers generate electricity from wastewater, while cleaning it up

Some energy resources used much more freshwater than others, the research finds. The biggest user of freshwater—around 28 percent of the total—is the water required to grow corn for ethanol. Coal uses 22 percent while nuclear uses 11 percent, largely for the cooling systems in power plants.

Oil and natural gas also have a large water footprint, but this water is typically low quality water. Together they use 16 percent of total freshwater.

When it comes to renewables, water consumption is a mixed bag. Hydroelectric power consumes a whopping 18 percent of total freshwater used for energy systems, mainly because of evaporation and seepage of water from hydroelectric reservoirs.

Low-carbon wind and solar are also the winners when it comes to water use. Producing electricity from these sources requires almost no water at all.