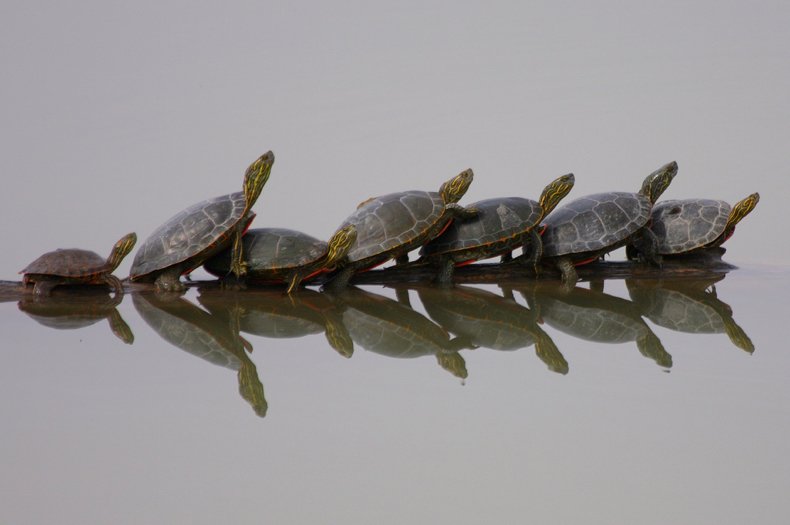 The missing turtles of the Anthropocene

When one thinks of Anthropocene signifiers, it’s usually material novelties that come to mind: concrete, plastic, radioactive debris, etc. But the Age can also be marked by what is missing. Such as: turtles.
By Brandon Keim
October 17, 2018

When one thinks of Anthropocene signifiers—the things that distant-future archaeologists will recognize as markers of how Earth’s basic processes took on a distinctly human tint—it’s usually novelties that come to mind. Things that, for better or worse, have been added to the planet’s biogeochemistry: concrete, plastic, radioactive debris, cities, mines, radically elevated greenhouse gas levels, and so on.

But the Anthropocene can also be marked by what is missing. Such as: turtles.

“Turtles are struggling to persist in the modern world, and that fact is generally unrecognized or even ignored,” write biologists led by Jeffrey Lovich of the U.S. Geological Survey in the journal BioScience.

Of the 356 turtle species whose lineage began more than 200 million years ago, write Lovich and colleagues, “approximately 61% are threatened or have become extinct in modern times.” They’re “arguably the most threatened of the major groups of vertebrates,” their future even more precarious than “the much-besieged and heavily publicized amphibians.”

The researchers lament that neither conservationists nor the general public appreciate the turtles’ plight, but their article — entitled “Where Have All the Turtles Gone, and Why Does It Matter?” — is not merely a plea to keep some irreplaceable biological legacy from vanishing. Rather, Lovich’s team frame the decline of turtles in terms of lost ecological functions.

“The declines and extinctions of turtle populations globally mean that their ecological roles are now greatly diminished from times when turtles were more abundant,” they write. “The impacts of their lessened roles are poorly appreciated and inadequately understood.”

“Two notable characteristics of pre-Anthropocene turtles were their massive population sizes and correspondingly high biomasses,” they write. A single hectare — about 2.5 acres — of healthy historical wetlands, for example, could contain nearly one ton of aquatic turtles. Land tortoises regularly tilted the scales at almost 600 kilograms per hectare. By comparison, one widely-cited study of herbivores on an African savannah estimated their total per-hectare biomass at 199 kilograms. Turtles once outweighed elephants.

That’s a lot of lost biological potential. The flesh of turtles sustained species who preyed upon them or their protein- and fat-rich eggs; their decomposing bodies redistributed vital nutrients across landscapes. Turtles “may occupy a prominent position in the mineral cycles of some ecosystems,” note Lovich and colleagues, “particularly in those that may be calcium or phosphorus deficient.” Without them, beach and dune ecosystems may be doomed.

Read:  Economists assume the desire for wealth is insatiable. What if they’re wrong?

Turtles also regulated the plant and animal populations they consumed. One study of estuarine-dwelling terrapins found that, in their absence, an abundance of turned salt marsh into mudflats in just eight months — a dynamic likely found in many settings. The effects of turtle loss “can be far-reaching and create trophic cascades, altered biomass structure, loss of community function, and invasive species resilience, all of which are critical to maintaining healthy ecosystems,” write the researchers.

Plant-eating turtles also played an important role in dispersing seeds; some tree species, including Madagascar’s tambaloques and baobabs, are declining as a consequence of their absence, and vegetation patterns along waterways are changing. Many turtles are also bioturbators, digging holes and moving soil in ways that enrich it. Their loss will lead to further biodiversity declines.

What’s more, their unique physiology — slow metabolisms, the ability to go dormant in times of resource scarcity — can allow turtles to maintain large populations in habitats that would otherwise be unable to support warm-blooded birds and mammals with higher energy requirements. When turtles are lost, other animals don’t take their place.

Appreciating all this is essential. While turtles are threatened by the usual culprits of habitat destruction, climate change, disease, hunting, and capture, it’s neglect that could seal their fate. Lovich’s team charges conservationists with prioritizing birds and mammals while paying relatively little attention to turtles — and if they did, conservationists might harness their ecological potential, too. Turtles could be tools of ecosystem restoration.

That said, the researchers’ final plea is not to utility. “It would be a sad world indeed to lose more of these iconic and remarkable survivors from the mists of deep evolutionary time,” they write. They survived the asteroid “that wiped out the dinosaurs. Will they survive us in the Anthropocene?”

Source: Lovich et al. “Where Have All the Turtles Gone, and Why Does It Matter?” BioScience, 2018.