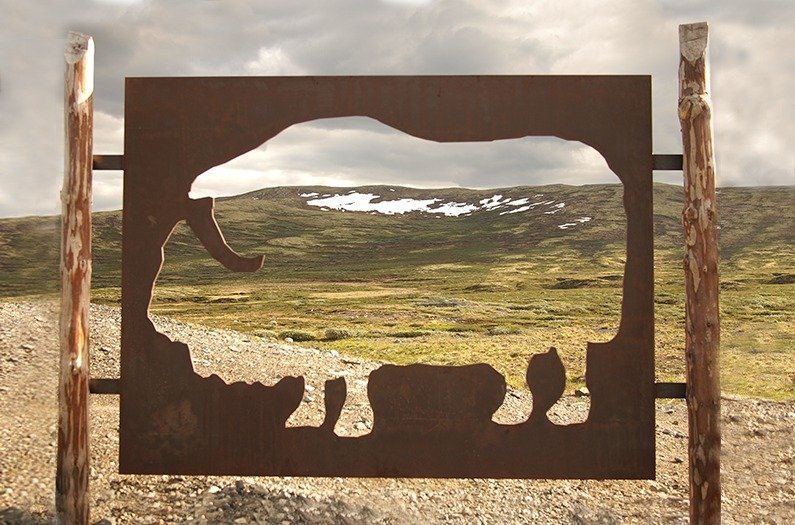 Across the Arctic, climate change has encouraged the growth of shrubs that accelerate regional warming — a process that can be reversed by the browsing of reindeer. Where else can big herbivores help keep Earth from overheating?
By Brandon Keim
October 31, 2018

Across much of the Arctic, climate change has encouraged the growth of shrubs. With their broad leaves and crowns that poke above winter snows, the shrubs absorb more heat than grass, accelerating the region’s warming — a process that can be reversed by the browsing of reindeer.

Where else can big herbivores help keep Earth from overheating? Or, to phrase it more scientifically, “might part of the solution for mitigating anthropogenic climate change lie in the restoration of extant megafauna to ecosystems?”

So write researchers led by Joris Cromsigt, an ecologist at the Swedish University of Agricultural Sciences, and paleoecologist Felisa Smith of the University of New Mexico, in the journal Philosophical Transactions of the Royal Society B.

The possible climate benefits of “trophic rewilding” — a fancy name for restoring entire lost levels of food-chains, in this case big plant-eating mammals — extend far beyond the Arctic. Their eating habits can influence vegetation in ways that helps sequester carbon; dung and urine enriches soils and helps vegetation grow, pulling more carbon dioxide from the air.

In the Serengeti in Tanzania, for example, swelling wildebeest populations in the 1960s reduced the occurrence of soot-spewing wildfires by lowering the amount of grass on the landscape while simultaneously nourishing soils so that other plants could grow. “This effect was so strong that it turned the Serengeti from a carbon source into a carbon sink,” write the researchers, “roughly equivalent to East Africa’s annual fossil fuel emissions.”

Herbivores won’t have the same effects everywhere, they caution. The effects will vary according to ecosystems. And it won’t be a silver-bullet solution — but then again, nothing is. At the very least, big herbivores could be a sometimes-important part of regional climate change mitigation portfolios.

At present, government funding for increasing natural carbon storage tends to focus on tree planting. “Why are these programs not investing in fighting the bushmeat crisis and restocking our empty tropical forests with megafaunal frugivores,” write Cromsigt and colleagues, “or stopping the current onslaught on African and Asian megafauna, such as elephants and rhinoceros?”

There would, of course, be plenty of details to work out. In many regions, putting big wild herbivores back onto the landscapes from which they’ve been extirpated would require removing livestock. Ranchers won’t look kindly on that. And while some of the lost meat production would be replaced by sustainable hunting of wild herds, says Cromsigt, “this would obviously entail a serious reduction in meat consumption.”

It’s also possible to imagine the idea backfiring, with certain animals or ecosystems stigmatized for not sequestering enough carbon. It would be a coldly utilitarian world if all of nature were viewed purely in terms of its offsetting ability. “I guess there is always this potential risk,” Cromsigt says, but nature is already managed for many reasons. Climate might as well be part of the equation.

The researchers call for more studies of precisely where and how herbivores might help. “Megafaunal effects are missing from mainstream climate- and Earth-system models,” they write, “and are hardly recognized by the Intergovernmental Panel on Climate Change. In the meantime, though, more studies are not necessary to know that big plant-eating mammals are in trouble.

Of 74 terrestrial herbivore species weighing more than 100 kilograms, nearly two-thirds are threatened with extinction. Many of those not likely to go extinct are experiencing dramatic declines in range and population. “We are losing the Earth’s last remaining megafauna,” say Cromsigt and colleagues, “and with it a potential option to address climate change.”