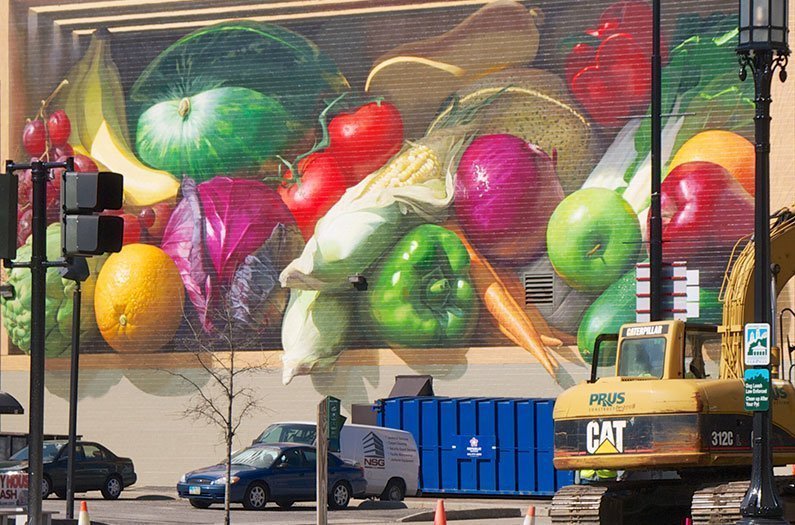 An analysis of 377 metros in the United States reveals that urban areas produce more food than we realise.
By Emma Bryce
October 12, 2018

One-in-five cities in the United States produce enough eggs and milk to feed their residents; another one-in-ten could completely satisfy local demand for fruit and vegetables using what they grow within their metropolitan boundaries. These findings, detailed in a new study, reveal that metropolitan areas are a much more significant source of local, sustainable produce than we might realise.

Through an analysis of food production and demand within the boundaries of 377 US metros, the researchers discovered that a surprisingly high proportion were already producing enough of four staple food products–eggs, dairy, vegetables, and fruits–to feed their citizens. In some cases this food provision may be going unrecognised: for instance, backyard gardens and urban farms may be providing unquantified amounts of food to local citizens. In other cases where food is farmed at larger scales on city outskirts, that produce may not actually be reaching local residents, because supply chains are often set up to export food further afield.

Localising production is widely recognised as a way to make food more sustainable, because it reduces the environmental costs and greenhouse gases associated with producing and exporting produce. It could even make cities more climate-smart by using plant cover to reduce the heat-island effect and deflect flooding. Plus, it brings the added benefit of making cities more food secure.

These advantages have encouraged several US cities to commit to boosting local food production. But the researchers on the new Environmental Science & Technology study say this overlooks the fact that so much urban food is already being produced.

In fact, while rates of production varied by product and region, they noted that almost every metro analysed in the study produced at least some quantity of eggs, fruit, and veg. In many, the production rates were high enough that they could meet not only direct demand–i.e. fresh eggs, fruit, and veg–but also indirect demand for those products, where they’re used as ingredients in other things, like milk being used to make cheese, and apples as the basis for applesauce.

To get their detailed findings, the researchers first modified an existing database that estimates dietary habits and household demand, based on sociodemographic information. Then they paired this with county-level estimates on the farm-production of eggs, milk, fruit, and veg. They also considered more informal food sources, like backyard food growing and community gardens.

Currently, 80% of the US population lives in an urban area, which underscores the need for urban food security. That’s accompanied by the growing global need for food systems that have a lighter environmental footprint. What the study reveals is the surprising fact that metros have latent potential to fulfil both those roles.

Since publishing, the researchers have made their data public: now they hope it will aid individual cities not only in recognising how much food they actually produce, but in revamping the local food system to feed the people that surround it.