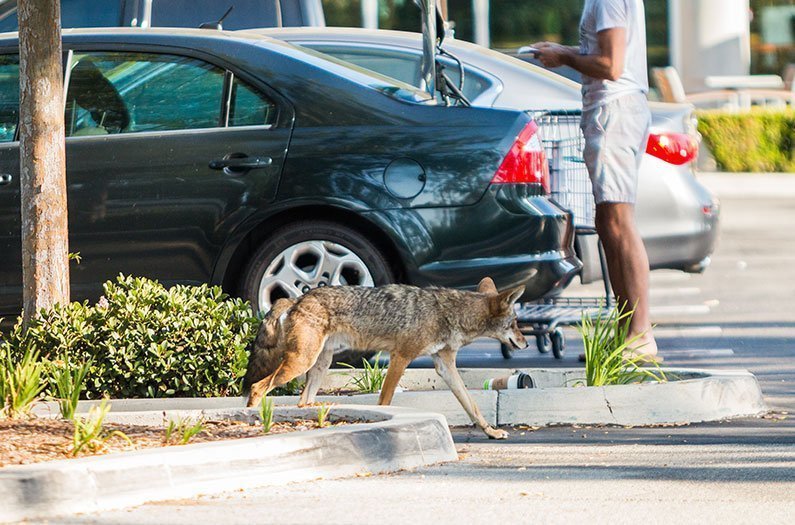 The suburbs may have more mammals than you think

According to a much-publicized estimate, it will take several million years for evolution to generate as many new mammal species as we’ve driven extinct. Yet if our legacy seems unredeemably bleak, consider that many developed areas, and in particular many suburbs, may be surprisingly hospitable to mammals.
By Brandon Keim
October 24, 2018

According to a much-publicized and much-lamented recent estimate of humanity’s toll on our warm-blooded kin, it will take several million for evolution to generate as many new mammal species as we’ve driven extinct. It’s profoundly tragic — yet if our legacy seems unredeemably bleak, consider that many developed areas, and in particular many suburbs, may be surprisingly hospitable to mammals.

In a study published in the journal eLife, researchers led by Arielle Parsons and Roland Kays of the North Carolina Museum of Natural Sciences analyzed data from camera traps set by citizen scientists at 1,427 locations in Washington, DC and Raleigh, North Carolina. The traps spanned a gradient from urban to suburban to exurban to rural to wild.

In both regions a total of 17 mammal species were detected. More do live there — DC, for example, is home to 30 mammals — but the cameras couldn’t reliably pick up small-bodied shrews and rodents, while bats and aquatic mammals like beavers literally didn’t enter the backyard- and forest-based frame. That said, the researchers picked up all the medium- and large-bodied mammals they could expect to find, and in surprising numbers to boot.

Contrary to expectation, wild places didn’t have the most mammals. “Developed areas actually had significantly higher or statistically similar mammalian occupancy, relative abundance, richness and diversity compared to wild areas,” write the researchers. “The extant mammal guild exploits all levels of the urban-wild gradient and that no species are entirely relegated to the wild gradient level.”

Some mammals, of course, notably wolves and cougars, are extirpated from those regions. Bears and bobcats also preferred wilder spaces, and in North Carolina bears — who are actively managed to prevent their moving into the region — were not detected at all around Raleigh. But suburban and exurban mammal communities were otherwise rich, richer even than in wild lands, which the researchers attributed to varied habitats and a lack of hunting.

“If you give mammals some protection and some space to roam,” says Kays, “they can adapt and find a way to make a living near people.”

The researchers are quick to caution against taking a rose-tinted view of their findings or extrapolating them too broadly. Two metropolitan regions in the eastern United States can’t speak for the world. More cities in different biomes need to be studied, and certainly many researchers have described urbanization’s negative impacts on particular species and communities.

Nevertheless, when it comes to the suburban mammals of DC and Raleigh, “the resilience of these species gives hope for wildlife in the Anthropocene,” write Kays and colleagues. And rather than using the results as an excuse to embrace development and forgo protecting wild places, they hope this suburban richness will inspire people to pursue animal-friendly approaches to what development does occur.

“We hope our study can open the average suburban resident’s eyes to the wildlife that lives all around them,” says Parsons. “It seems we all share our backyards with more wildlife than we knew.”