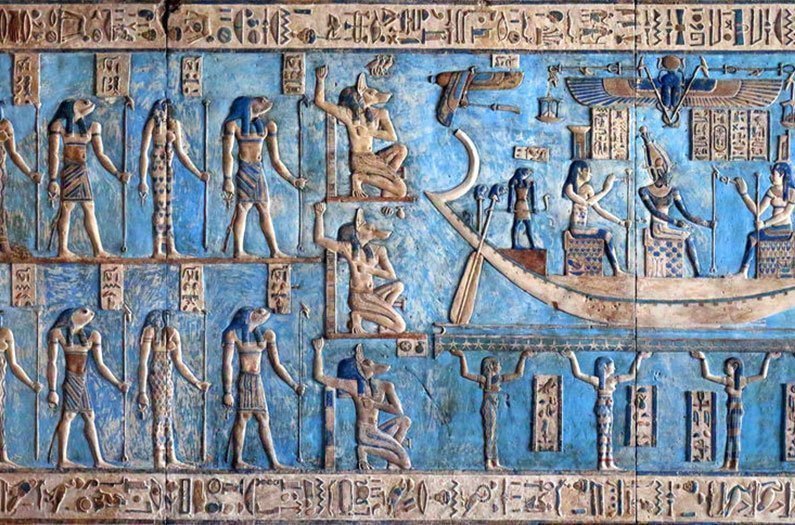 A pigment developed thousands of years ago in ancient Egypt could also have potential as a sustainable building material today.
By Sarah DeWeerdt
October 16, 2018

A pigment developed thousands of years ago could help save energy today by keeping buildings cool, and also has potential as a component of window-embedded solar panels.

Egyptian blue adorned paintings of gods and royalty in ancient Egypt. This pigment is fluorescent, meaning that it absorbs photons of visible light and then emits them in the near-infrared range. Art historians have used patterns of fluorescence to distinguish Egyptian blue from related blue and purple pigments, which helps them reconstruct the history of ancient works of art.

Now, researchers from the Lawrence Berkeley National Laboratory in California say Egyptian blue could also have potential as a sustainable building material.

To assess these possibilities, the researchers painted aluminum panels with white, black, gray, or Egyptian blue pigments and placed them out in the sun.

Under these conditions a panel painted white increases in temperature by 8 °C. A panel painted black heats up by a whopping 37 °C. The temperature of the Egyptian blue panel rises by 20 °C, the researchers report in the Journal of Applied Physics.

The near-infrared photons emitted by Egyptian blue pigment carry about 70% of the energy originally absorbed from sunlight, helping to keep the temperature of the panel in check. Egyptian blue’s fluorescence can release up to 150 watts of energy per square meter, the researchers calculated.

Obviously, the blue paint isn’t quite as good at keeping things cool as white paint is. But most people don’t want white shingles on their roofs.

And of course, Egyptian blue, gorgeous as it is, isn’t exactly a conventional choice for roofs either, at least in many parts of the world. But the researchers found that they could layer the blue over a yellow pigment to produce green, or an orange pigment to produce black – and now we’re in more usual roof color territory.

Moreover, some yellow and orange pigments also fluoresce, which could add to the cooling qualities. In other words, so-called “cool roofs” may soon come in black.

Previous studies suggested that Egyptian blue only emitted about 10% of the photons it absorbs. The new analysis finds that it is closer to 100%. This increased quantum efficiency, as scientists call it, opens up the possibility of using the pigment in window-based solar panels.

Windows could be tinted blue with the pigment, and photovoltaic cells arrayed around the edges would convert the energy of the near-infrared photons to electricity. Such an arrangement is yet to be tried out, but the new results suggest this approach is more feasible than previously assumed.