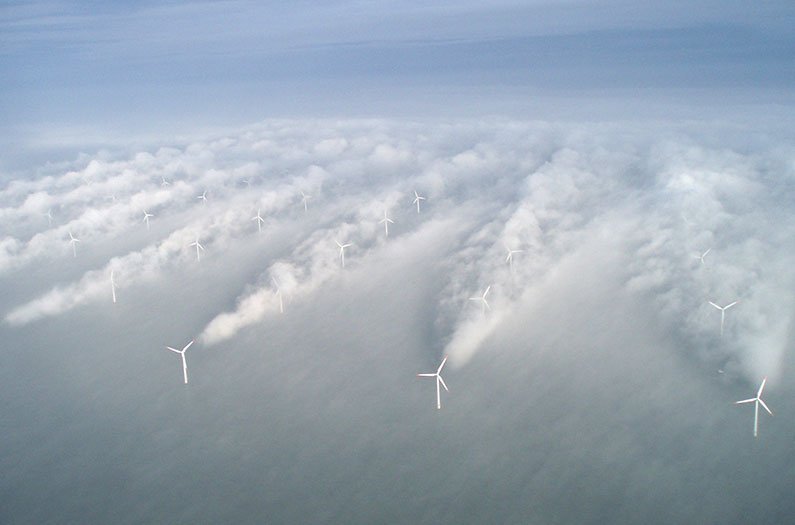 How wind farms could soak up hurricane rains

A new study finds that large offshore wind farms could reduce the rainfall from hurricanes, lessening their damaging impact.
By Prachi Patel
November 1, 2018

A new study shows that offshore wind turbines could pack a one-two punch against global warming. They not only provide clean carbon-free electricity to combat climate change, they could also lessen the impact of more powerful, damaging hurricanes that warming oceans are said to cause.

In 2014, a team led by Christina Archer, a civil and environmental engineer at the University of Delaware showed that a fleet of tens of thousands of wind turbines could extract kinetic energy from the air, and would have reduced the wind and storm surge from Hurricane Katrina, which hit New Orleans in 2005.

Archers’ latest work shows that wind turbines can also soak up precipitation from hurricanes. They used a weather forecasting model with atmospheric data from Hurricane Harvey, the category 4 storm that hit Texas in August, 2017, causing $125 billion in damage, mainly from rainfall-triggered flooding in Houston and southeast Texas.The researchers included in the model the turbulence and drag that wind turbines create. They ran simulations of different scenarios: wind farms of three different sizes and two different turbine spacings. All the turbines were placed along the coast of Texas and Louisiana, ranging from on the coastline to 100 km offshore.

The simulations show that large offshore wind farms would protect the coast from heavy rain during hurricanes. Medium and large wind farms with about 33,000 and 75,000 turbines respectively would have reduced the rainfall from Hurricane Harvey by around 15 percent. A medium-sized farm with 59,000 densely packed turbines placed 900 meters apart would have cut the most rainfall from Harvey at over 20 percent.

Wind turbines act like a wall, slowing down strong hurricane winds and making them move up. That makes moisture in the air precipitate and lead to rainfall. Winds that get past the turbines move downward, pulling down air from higher in the atmosphere that is drier and suppresses precipitation. The effect, in total, is to squeeze out moisture from storms.

Next, the researchers plan to figure out the smallest array size and turbine layout that would have significant benefits while minimizing installation costs. “Smart layouts with fewer turbines over smaller areas can be almost as effective as those with more turbines over larger areas,” the researchers write.