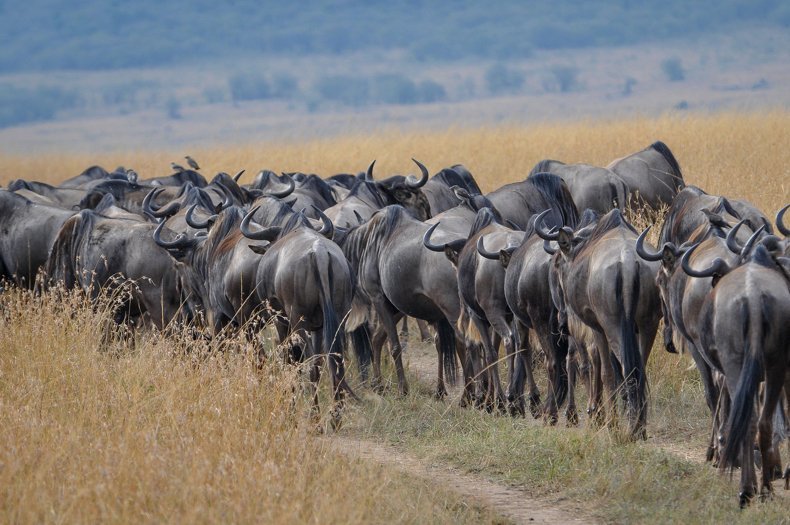 When people look to nature for solutions to wildfires made bigger, hotter, and more dangerous by climate change, they tend to focus on vegetation—not animals. Yet evidence suggests that big plant-eaters may help prevent fire.
By Brandon Keim
November 7, 2018

About 15,000 years ago, as Earth warmed and humans proliferated, a wave of extinctions occurred. Sloths the size of moving trucks, bison and deer who dwarfed their modern counterparts, giant kangaroos, mammoths. On and on the list goes, a menagerie of fantastic creatures now known only from the fossil record.

In that fossil record, scientists have also noticed something else fantastical, or at least unusual, though it’s remarked upon far less than those lost beasts. Charcoal. Lots of it, a fine layer that accumulated across many landscapes after the big animals vanished. This may not have been a coincidence.

The absence of those animals appears to have made ecosystems more prone to fire — a possibility with implications both disturbing and hopeful. The early 21st century is a time of worsening wildfires and ongoing extirpations, but perhaps conservation could help prevent conflagration.

“Recent and continuing declines of large vertebrates are likely to be significant contributors to changes in fire regimes,” write researchers led by ecologist Chris Johnson in the journal Philosophical Transactions of the Royal Society B. “Rewilding potentially offers a powerful tool for managing the risks of wildfire.”

The paper is part of a series examining how rewilding — reintroducing animals, particularly big animals, to landscapes that once hosted them or their extinct relatives — can have profound environmental benefits. Adding lost animals might help ecosystems sequester more carbon, reduce the impact of invasive species, fertilize streamside forests, and even regulate unpredictable ecological responses to climate change.

That they might also fight fire is perhaps the most surprising possibility. While people have looked to nature for solutions to wildfires made bigger, hotter, and more dangerous by climate change and human land use, they’ve focused on vegetation dynamics — at how, for example, allowing small fires to burn rather than extinguishing them immediately prevents woody debris from accumulating as tinder. Animals are not part of the conversation.

Yet as Johnson and colleagues review, there’s plenty of reasons to think animals could be helpful. Small fires consume woody debris; so, quite literally, do big plant-eaters. Because their feeding patterns are varied rather than uniform, with some areas heavily grazed or browsed and others ignored, they produce patches of low- and high-flammability vegetation “interspersed in arrangements that could impede the spread of landscape fire,” write Johnson and colleagues.

They can also change the land itself. By digging through soil litter and turning it over — think of wild boar rooting for food — big plant-eaters can bury material that would otherwise become fuel. Barren passages created by the heavy, ceaseless steps of migrating herds can be seen not only as trails, but as potential firebreaks.

Read:  Plant-based plastic cutlery rarely gets composted. This advance could give it a new purpose

Much does remain to be learned, and the use of animals to fight fire is sure to be complicated. In certain instances browsers — animals who feed on tall growth, such as shrubs and small trees — could promote the spread of grasses, in turn making fires more likely. “There is some evidence that elephants can sometimes have that sort of effect in Africa,” says Johnson. “If we’re reintroducing species, we should aim to restore complementary suites of species — browsers and grazers — to prevent these unwanted kind of effects.”

There’s a role for predators, too, in preventing potentially trouble overpopulations, such as deer whose munching prevents saplings from maturing turns forests into in fire-prone thickets. That’s a problem now in New Zealand, says Johnson, where vegetation didn’t evolve to withstand the pressure of deer introduced to the island from elsewhere. Yet that doesn’t mean non-native animals are intrinsically fire-prone: in Australia, non-native swamp buffalo seem to reduce fire intensity, and may actually play wetlands-enhancing roles performed by now-extinct species.

The dynamics may also vary from place to place. As for now, say the researchers, historical evidence of animal-induced fire control is strongest in warm environments with moderate rainfall and grass-dominated vegetation. Extinctions didn’t seem to have much affect on fire patterns in shrublands and arid grasslands. And it’s at at least possible that, where fire did follow extinctions, it was just a coincidence. Maybe climate changes were the culprit.

Nevertheless, the possibilities are tantalizing. Some modern studies already suggest that people could work with animals: researchers have described how grazing reduces fire frequencies in Kansas tallgrass prairie, Kenyan savannah, and tropical Australian forests. More research is needed — but the future could well be a place with more big animals and fewer big fires.

Source: Johnson et al. “Can trophic rewilding reduce the impact of fire in a more flammable world?” Philosophical Transactions of the Royal Society B, 2018.