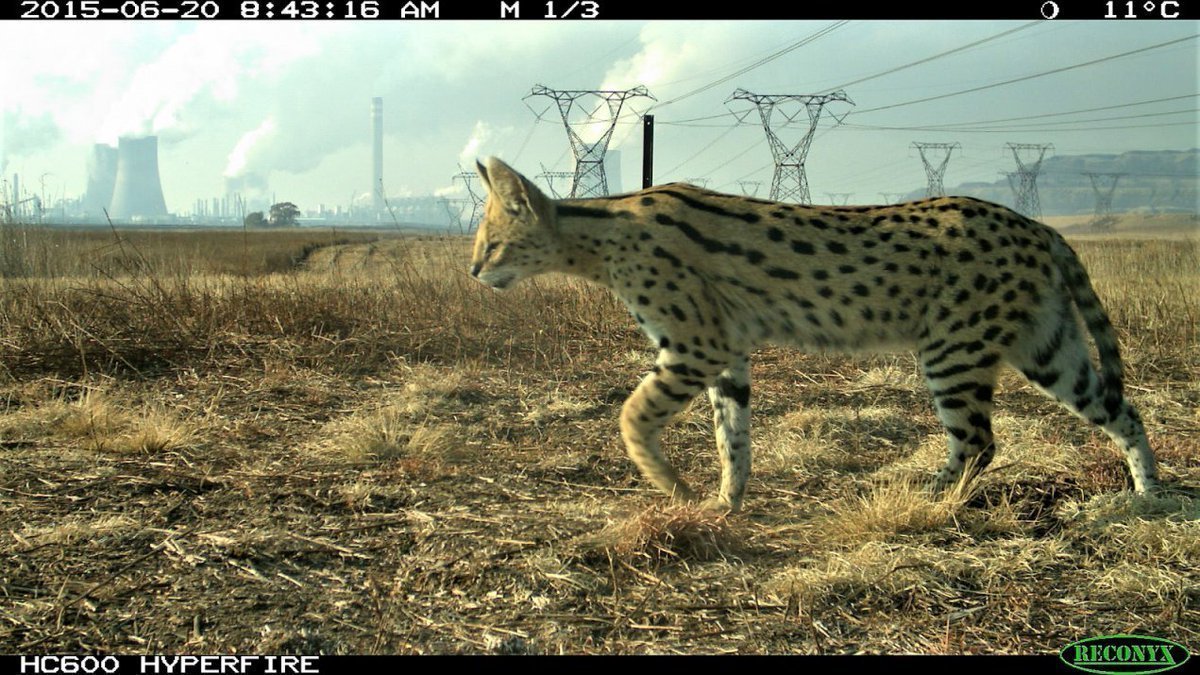 In the fields and wetlands surrounding one of the world's largest petrochemical plants, researchers have documented the highest serval population density ever recorded.
By Sarah DeWeerdt
November 13, 2018

To the human eye, the Secunda Synfuels Operations plant in South Africa is an unremittingly industrial landscape. The plant, which produces liquid fuels from coal, has been described as the world’s largest single source of greenhouse gas emissions.

But to a medium-sized spotted cat called a serval (Leptailurus serval), Secunda may just be an Eden. In the fields and wetlands surrounding the plant, a group of South African researchers have documented the highest serval population density ever recorded.

The findings call attention to the surprising ways in which developed landscapes can benefit wild species — not just on military installations or in suburbs as has previously been reported, but in some of the most industrialized areas as well.

The researchers conducted surveys with 34 motion-sensing cameras placed along game trails and roads throughout an 80-square-kilometer area surrounding the plant. They used distinctive spot patterns and scars to identify individual servals in the resulting photos.

They also set out 16 cage traps baited with guineafowl so that they could catch servals and weigh, measure, and determine their sex before releasing the cats.

Based on the data from the motion-sensing cameras, the researchers estimated that Secunda supports a serval population density between 76 and 101 animals per 100 square kilometers. That’s higher than has been reported even from national parks and protected areas.

The live-capture success rate of 0.21 animals per trap-night is also very high for similar-sized cat species. The data from the live trapping indicates that Secunda is home to somewhat more adult male servals than females, and about 70 percent of the population is composed of juveniles and sub-adults. This is similar to the population structure documented at other sites, suggesting that Secunda’s serval population is relatively stable, the researchers say.

“Areas such as industrial sites are sometimes presumed to have little conservation value, but many of these sites have areas of less disturbed habitats around their core infrastructure, which could provide ideal conditions to support some species,” the researchers write in the journal Scientific Reports.

The area surrounding the Secunda plant consists of grassland, ridges and rocky outcrops, and scattered natural and human-made wetlands. About 38% of the study area is classified as relatively undisturbed.

The serval, which ranges throughout much of sub-Saharan Africa, is still common overall, but the South African population is considered Near Threatened. Servals prefer wetland habitat, which is disappearing in many places.

The researchers have several ideas about why Secunda seems to be such a good place for servals. The patchy habitat and disturbed areas may support large populations of rodents that are the cat’s primary prey. Servals are the largest carnivore found at Secunda, so they have fewer competitors and predators than they might elsewhere. Finally, they are protected from persecution by humans that they often face in agricultural areas.

Other medium-sized carnivores such as coyotes and foxes can also reach high densities in human-modified habitats such as cities, the researchers note. However, more work is needed to see whether there are any effects of noise, air pollution, or other aspects of industrial activity on wildlife at Secunda.

In the meantime, the results suggest that wildlife biologists and conservationists should think more about the ecological potential of industrial areas. These landscapes should have management plans that integrate them into broader wildlife management strategies for the region, the researchers argue.

Photo: Image of a serval captured by a motion-sensing camera near the Secunda Synfuels plant. Credit: Loock et al. 2018.