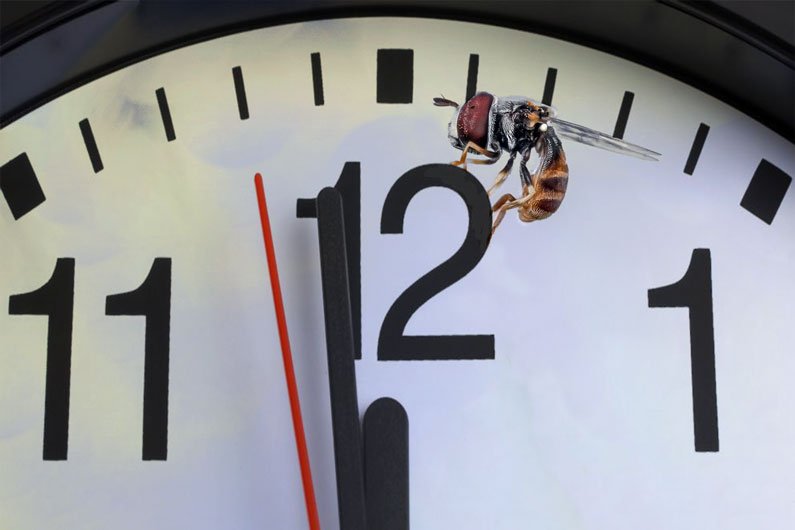 For insect impersonators, timing is everything

When it comes to mimicry, climate change isn't a story of simple winners and losers. The relationships human actions are disrupting are complex and subtle.
By Sarah DeWeerdt
December 4, 2018

Climate change brings earlier springtimes that can knock organisms out of sync with their environment and other species they depend on. Think of the snowshoe hare that still has its white winter coat even though the snow has melted, the insect pollinator that emerges before its host plant is in bloom, the bird whose chicks hatch before the insects it eats are abundant.

Those examples are fairly well established. But much less is known about how seasonal shifts could affect mimicry. For example, many species of hoverflies have evolved to look, sound, and behave like wasps and bees – without the sting. It’s thought that birds learn the hard way to avoid spicy bees and wasps, and the hoverflies get a reprieve from predation based on their resemblance.

To learn more about how climate change may affect this survival strategy, researchers from Leeds University in the UK and Carleton University in Ontario, Canada leveraged the fact that humans, like birds, depend a lot on vision. They devised a couple of digital experiments that, in effect, used people as stand-ins for birds in order to suss out how climate change might be affecting different players in the bird-bee-hoverfly mimicry system. They report their results in a paper published yesterday in the Proceedings of the National Academy of Sciences.

In one experiment, the researchers asked visitors to the website www.mimicryexperiment.net to judge the similarity of randomly paired images – one bee or wasp, and one hoverfly. There were 237 combinations of stinging insects and hoverflies that participants consistently rated as looking fairly similar – at least 5 on a scale of 1 to 10. This “get an overall impression of the bug” strategy is basically how birds evaluate a potential insect meal, so the researchers deemed the similar pairs to be likely mimicry relationships. That may sound a bit, well, lacking in rigor — but in fact past studies have shown that humans taking a glance do about as well as complex computer algorithms at identifying such similarities.

Some species of bees and wasps appear earlier in the spring than do their hoverfly mimics. Other hoverflies appear earlier than do their bee or wasp models. In still other model-mimic pairs, which species emerges first is essentially random from year to year. But in the past, it has been unclear how the timing of insect emergence plays in to the success of mimicry.

So to find out, the researchers designed a second experiment, a virtual reality game in which players viewed pictures of bees, wasps, and hoverflies and had to choose which insects to “eat” by clicking on them. Players earned 5 points for eating a hoverfly mimic, lost 10 points for eating a bee or wasp, and neither gained nor lost points for passing up an insect morsel. At the end of the game, the researchers totted up the points to evaluate who benefits from the various model-first, mimic-first, and random-emergence scenarios.

They found that bee and wasp models do best when they emerge first, presumably because predators quickly learn to avoid them. Hoverfly mimics benefit from unpredictability, and do best when their timing of emergence is random relative to bee or wasp models. Predators do worst in the random situation; they “benefit from consistent education on either prey item,” the researchers write.

The final step was to weave in climate change. To do this, the researchers combed through more than a million records in databases of natural history information collected by citizen scientists to determine when during the year bee, wasp, and hoverfly species involved in mimicry are active. They also looked at how those dates have changed since 1960.

On average, UK hoverfly mimics are slightly more likely to emerge before their bee and wasp models. But as the climate warms, this pattern is getting weaker. That’s because bees and wasps are advancing their season – becoming active earlier in spring – faster than are hoverflies. That means fewer species pairs in which hoverfly mimics emerge first, more pairs in which bee and wasp models emerge first, and a slight decline in species pairs showing random emergence.

But for hoverfly mimics, climate change is a mixed bag, decreasing their best-case scenario (random emergence), but also their worst-case scenario (mimic-first). When it comes to mimicry, climate change isn’t a story of simple winners and losers. That might sound reassuring at first — but in fact, the findings are a reminder of just how complex and subtle are the relationships human actions are disrupting.

Photo: A hoverfly in an early spring flower, a daffodil. Credit: nmahieu via Flickr.