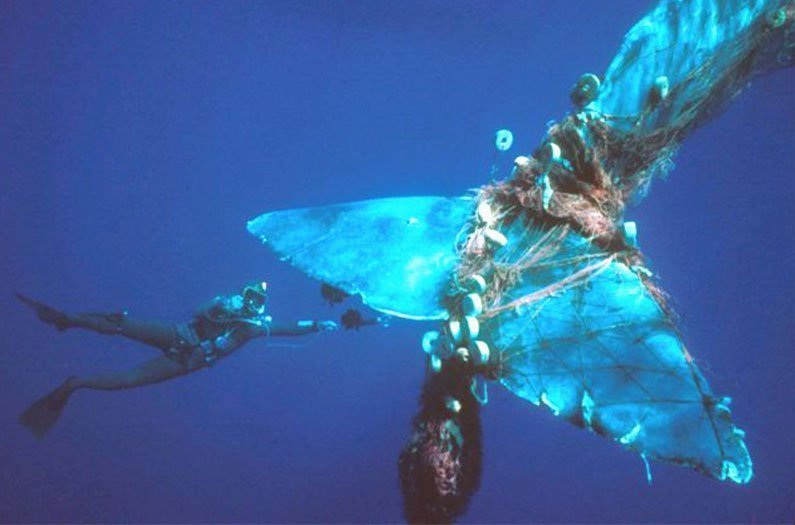 Should whale welfare be considered in sustainable fishing?
Hundreds of thousands of whales and dolphins are killed each year as bycatch in commercial fishing. Yet unless their deaths pose a species-level threat, the welfare of bycaught cetaceans is rarely a factor in evaluating a fishery’s sustainability.
By Brandon Keim
January 16, 2019

Hundreds of thousands of whales and dolphins are killed each year as bycatch in commercial fishing. Many times that number are injured or crippled in their encounters with fishing equipment. Yet unless their deaths pose a species-level threat, the welfare of bycaught cetaceans is rarely a factor in evaluating a fishery’s sustainability.

Given what scientists know about cetacean suffering, and the public’s deep sympathy for these animals, is it time to overhaul what’s considered sustainable?

Posing that question are Sarah Dolman and Philippa Brakes of Whale and Dolphin Conservation, a United Kingdom-based cetacean protection organization. “‘Sustainable’ does not necessarily mean that fisheries can also be considered responsible with regard to bycatch,” they write in the journal Frontiers in Veterinary Medicine. There is an urgent need “not only to maintain cetacean populations, but to minimize welfare impacts on individual animals.”

Accounting for animal welfare might seem an odd fit for population-level sustainability conversations. Yet the definition of sustainability is not written in stone, and it’s particularly worth reviewing in the context of commercial fishing — “the last human activity targeting wildlife on a grand scale,” write Dolman and Brakes, “where slaughter includes incidental killing of other large sapient wildlife on such a regular basis.”

Many studies have described the consequences for cetaceans of becoming entangled in fishing equipment. They’re killed by asphyxiation or, even worse, after months or years of painfully dragging nets and traps through the ocean; these arguably represent, write Dolman and Brakes, “one of the worst forms of human-caused mortality in any wild animal.” Some cetaceans survive, but with broken teeth and open wounds and severed limbs. Autopsies of naturally-deceased cetaceans show these encounters to be common. Off the west coast of Scotland, for example, one in five minke whales has scars of entanglement.

It could still be argued that such impacts fall outside the scope of a fishery’s sustainability, just as cosmetic products have separate assurances of being eco-friendly and cruelty-free. Yet Dolman and Brakes also assert that, given the complex social lives of cetaceans, deaths and injuries may indeed impact populations in ways that are difficult to measure but deeply important.

Discover more:  Researchers calculated how many lives energy-efficient buildings could save

“Different individuals within a population can have specific roles, which enable them to share important information, for example, about the location of food or safe places for rearing young,” said Dolman and Brakes in an email. Removing or handicapping those individuals “can have a knock-on effect on the transmission of ecologically important knowledge within a population. Their removal cannot simply be calculated as a minus-one.”

Fortunately for cetaceans, bycatch doesn’t need to happen. Conservationists and fishers have worked to develop technologies and techniques — cetacean-scattering acoustic signals, whale-friendly fishing lines, strategies for avoiding places where the animals are feeding — that could dramatically reduce and conceivably even eliminate bycatch.

Achieving that, however, will require political leadership, collaboration between cetacean advocates and the fishing industry, and demand from people who eat fish. Sustainability certifications and consumer labels for fish products need to consider cetacean deaths and suffering.

“The existing labels are currently woefully inadequate for assessing bycatch,” say Dolman and Brakes, even as most people assume that bycatch is part of the equation. As they learn more, “an expectation will arise from consumers and so from supermarkets,” says Dolman. “That will drive this change.”


About the author: Brandon Keim is a freelance journalist specializing in animals, nature and science, and the author of The Eye of the Sandpiper: Stories From the Living World. Connect with him on Twitter, Instagram and Facebook.