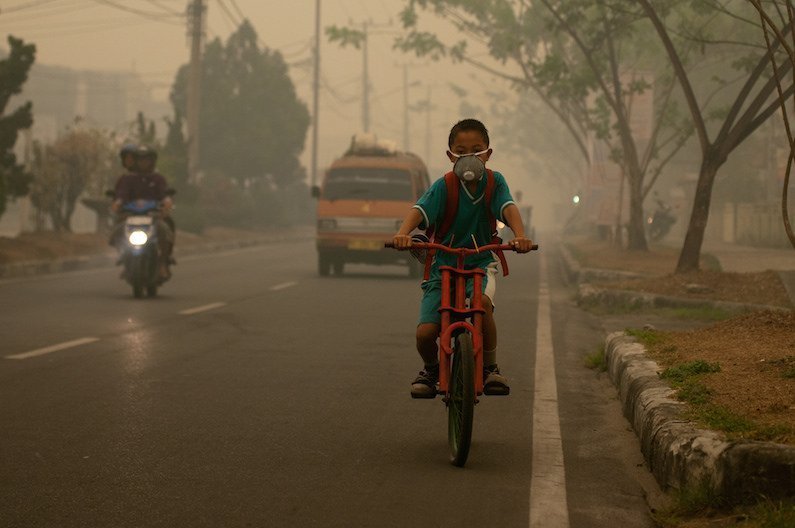 China’s Particulate Pollution is Plummeting, But That’s Not Good News

China has drastically cut harmful fine particle levels in the air, but this has led to an increase in ground-level ozone pollution, especially in big cities.
By Prachi Patel
January 10, 2019

There might be no free lunch when it comes to fighting pollution. China’s efforts to curb air pollution have drastically cut harmful fine particle levels in the air, but this has led to an increase in ground-level ozone pollution, especially in big cities, shows a new study published in the Proceedings of the National Academy of Sciences.

While ozone high up in the atmosphere protects us from harmful ultraviolet rays, on the ground it’s the main ingredient in smog and can be a harmful pollutant. Breathing air with high levels of ozone can harm those with asthma as well as children and older adults. It also stunts plant growth, which can negatively affect entire ecosystems.

The Chinese government in early 2013 took strict action to reduce another harmful pollutant known as PM2.5, a term for fine airborne particles that are less than 2.5 micrometers in diameter and can penetrate the lungs and cardiovascular system. Efforts have included limiting the number of cars on the road, cutting emissions from coal-fired power plants by shuttering old ones and replacing them with natural gas.

Those measures seem to have worked very well. Between 2013 and 2017, PM2.5 concentrations in eastern China have fallen nearly 40 percent. But during those same five years, ozone levels in major urban areas rose by 5 to 10%. Researchers at Harvard University and at Nanjing and Tsinghua Universities set out to find out why.

Ozone is created by chemical reactions between nitrogen oxides and volatile organic compounds, which are pollutants mainly emitted by the burning of fossil fuels and from chemical plants. The oxidation of VOCs forms chemical radicals that trigger reactions between NOx and VOCs in the presence of sunlight to produce ozone.

Using computer modeling, the researchers found that particulates act like little sponges that soak up chemical radicals. This keeps them from driving the formation of ozone. As it turns out, China’s regulations lowered these radical-soaking particulates but did not control the emissions of VOCs. So as particulate levels fell, more radicals were available to react with VOCs and boost ozone levels.

“We haven’t observed this happening anywhere else because no other country has moved this quickly to reduce particulate matter emissions,” said Daniel Jacob, professor of atmospheric chemistry and environmental engineering, in a press release. “It took China four years to do what took 30 years in the U.S.”