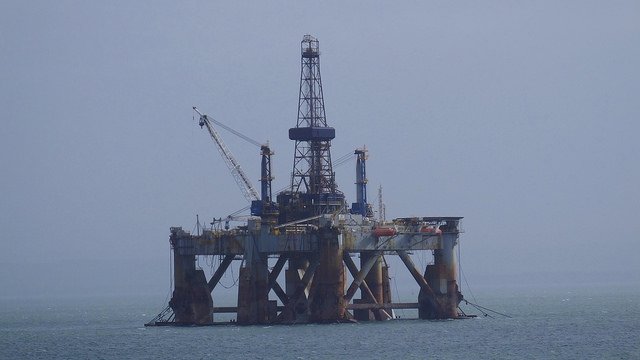 Fossil fuel’s leftover infrastructure may have a surprising new ecological role
Removing drilling rigs makes things look more pristine from a human perspective. But the view may be different from under the water’s surface. Leaving structures in place can actually have benefits, and removing them can cause harm.
By Sarah DeWeerdt
January 15, 2019

Nearly 8,000 offshore oil and gas rigs are currently in operation around the world. These installations represent massive infrastructure with a finite lifespan. In the next five years, more than 600 rigs are expected to wrap up operations. An additional 2,000 will be obsolete by 2040.

Decommissioning offshore oil and gas infrastructure comes with environmental challenges – but also opportunities – researchers argue in a paper published in December in Science of the Total Environment.

“After decades at sea, oil and gas structures support diverse marine life,” the researchers write. Many offshore rigs attract surprising concentrations of fish. They also provide a place for mussels, barnacles, and other invertebrates to settle. In the North Sea, creatures attached to drilling rigs can increase the weight of these structures by up to 30%.

Removing drilling rigs makes things look more pristine from a human perspective. But the view may be different from under the water’s surface. Leaving structures in place can actually have benefits, and removing them can cause harm.

When oil and gas rigs go away, so does the biota that sprang up around them. Since the structures can provide connectivity in areas where natural reefs are sparse – acting as ‘stepping stones’ for species to get from one area of habitat to the next – their loss can also have effects on the broader marine ecosystem.

“All decommissioning options involve some physical disturbance to biota and habitats,” the researchers write. If the rig is left in place all that’s necessary is plugging the wellbore, but partially dismantling the structure or removing it from the seafloor may involve disruptive cutting tools or even explosives.

These processes can disturb piles of drill cuttings on the seafloor, dispersing toxic compounds. (On the other hand, slow degradation of components when structures are left in place can also result in release of contaminants.)

Paradoxically, active oil and gas rigs act as de facto marine protected areas because safety regulations exclude fishing boats from the area around the platform. Decommissioned structures left fully or partially in place can still have some of these benefits, because they prevent bottom trawling. Removing all of the oil and gas rigs from the North Sea would open up about 400 square kilometers to this destructive fishing method.

No one decommissioning method is best in all situations. The researchers advocate an ecosystem approach to decommissioning – considering the full range of environmental benefits and harms associated with different options.

That will require more research on the habitat value of oil and gas structures in some regions, such as Southeast Asia and West Africa. It will also require more flexible thinking. In some regions, such as the North Sea, complete removal is the default approach to decommissioning. By restricting options up front, planners may fail to identify the approach that is best for the environment.

For example, decommissioning studies showed that one large North Sea rig, the Murchison platform, had become home to large concentrations of fish, sensitive cold-water coral, and other marine life. But planners decided that since those species would not have been there if it hadn’t been for the rig, they didn’t need to consider the effects of the rig’s removal on the community.

The paper’s implicit backdrop is a kind of business-as-usual cycle of offshore oil and gas exploration, production, and decommissioning. But it doesn’t take a big leap in logic to realize that one of the side effects of deep decarbonization of society would be one a heck of a lot of disused fossil fuel infrastructure, on land as well as offshore. What ecological roles might that infrastructure be playing that we want to preserve? And to what creative purposes might we, someday, put the fossil fuel era’s leftover junk?

Image: A disused drilling rig off the coast of Scotland. Credit: byronv2 via Flickr.

A well designed carbon tax could reduce carbon emissions and poverty at the same time; A new study shows how.

Researchers make the case for a ‘cap-and-trade’-style system that would distribute nitrogen and phosphorus more evenly around the planet.