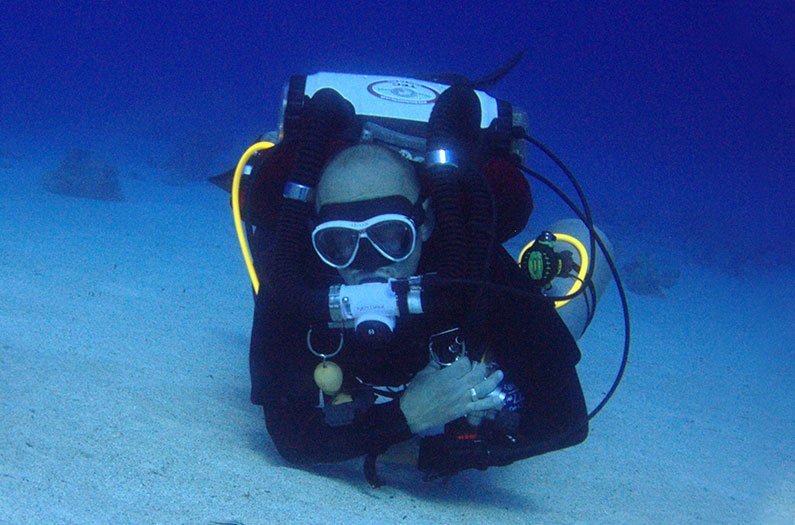 A new method to scrub carbon dioxide from factory and power plant smokestacks is similar to that used in specialty scuba-diving gear, and should use significantly less energy than state-of-the-art carbon capture methods.
By Prachi Patel
February 7, 2019

Researchers have developed a new method to scrub carbon dioxide from factory and power plant smokestacks. The technology is similar to that used in specialty scuba-diving gear, should use significantly less energy than state-of-the-art carbon capture methods, the scientists write in Chem.

The heart of the system is a naturally occurring organic substance called guanidine. The material selectively absorbs carbon dioxide and reacts with it, forming tiny crystals of a solid bicarbonate salt.

Researchers at Oak Ridge National Laboratory made a solution of a guanidine compound in water and pumped flue gas through it. Once enough carbon dioxide is captured, the researchers filter the salt crystals out of the mixture. Heating the crystals to 120 degrees Celsius removes the carbon dioxide and leaves behind the guanidine compound, which can then be dissolved in water for reuse. The material could be recycled like this indefinitely, the researchers say.

A similar process is used in scuba equipment called rebreathers, which reuse exhaled air to allow longer dives. Rebreathers are filled with soda lime, which filters out carbon dioxide and reacts with it to form solid calcium carbonate.

The team calculated that the process takes 24 percent less energy than that based on commonly used liquid sorbents. That’s because it takes more heating to separate carbon dioxide from the liquid sorbent. Plus liquid sorbents also evaporate or decompose over time. The ORNL team found that they lost almost none of the solid guanidine sorbent after 10 absorption cycles.

“The lower energy required for regeneration is expected to significantly reduce the cost of carbon capture, which is critical considering that billions of tons of CO2 need to be captured every year to make a measurable impact on the climate,” said Radu Custelcean, the ORNL chemist who led the new work.

While the material is promising, though, the researchers still have some issues to work out. The sorbent absorbs carbon dioxide relatively slowly and cannot hold too much of it at once. Custelcean says that the team is now “addressing these issues by combining the sorbent with traditional sorbents, such as amino acids.”

The researchers are also tweaking the process so that it can be used to directly capture carbon dioxide from air.