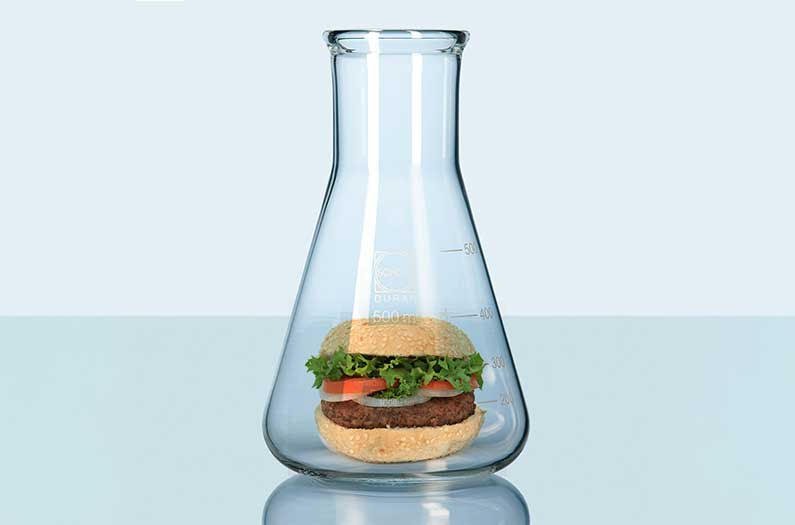 Lab-cultured meat might not be all it's cracked up to be. That's the finding of a new study which shows that methods used to produce this futuristic food might pump huge quantities of carbon dioxide into the atmosphere that would linger for centuries to come. But the research has a few critical caveats.
By Emma Bryce
February 22, 2019

Meat grown in a lab may become more detrimental to the planet than some types of cattle farming, a new study suggests. Published in Frontiers in Sustainable Food Systems, the findings show that this form of food production could generate large quantities of carbon dioxide that will go on to shape climate change hundreds of years into the future.

But, the research also comes with some major caveats–chiefly, that it overlooks the potential for this emerging new industry to switch to green energy.

We’re currently making big technological leaps in culturing meat from animal cells, which is increasingly touted as a better alternative to other forms of meat production, like cattle farming. Growing meat in a lab side-steps the environmental and ethical impacts of raising beef in pastures, and killing these animals for food; producing meat this way is especially celebrated for generating much less of the methane and nitrous oxide that cows are famous for emitting, both of which are particularly powerful greenhouse gases.

Yet, making cultured meat does still require large amounts of energy to power production and maintain growth temperature for cells–and that results in carbon dioxide emissions, the Oxford University researchers point out in their study. CO2 also comes with its own unique set of challenges: methane may be more potent but it lasts in the atmosphere for only 12 years, whereas CO2 lingers for thousands, meaning it accumulates and worsens climate change in the long-run.

So, to truly compare the impact of farmed cattle and lab-grown meat, the researchers separately considered the amount of methane, nitrous oxide, and carbon dioxide arising from each types of food production. That’s a departure from previous emissions estimates, which have typically relied on ‘carbon dioxide equivalents’, a standard way of measuring emissions impact that equates the likes of methane with carbon dioxide–without taking their very different climate effects into account.

Using this more nuanced measure, the researchers were able to closely compare the climate impact of three beef production systems, and four possible methods of culturing meat, and to project their impacts 1000 years into the future. This was also modeled according to different possible consumption pathways–including a global decline in meat consumption to more sustainable levels.

This revealed that if both types of meat production were ramped up in the future to satisfy a continually growing global demand, initially the more potent effects of methane from live cattle would increase global warming. But over time these effects diminish, as methane dissipates in the atmosphere. Conversely, greater amounts of CO2 generated by labriculture would then start to accumulate, and ultimately intensify warming in millennia to come, because of the gas’s incredible longevity. Overall, labriculture is “increasingly outperformed by all of the cattle systems the longer that production is maintained,” the researchers write.

Even if humans started to reign in their appetite for meat over the 1000-year period, they found that the CO2 from cultured meat production would continue to accumulate and persist, still exceeding the warming impact of some types of beef production. However, this comes with a critical caveat. Expanding pasture land for cows–which often means deforestation–is itself a huge source of CO2 emissions in cattle farming, but the researchers say they weren’t able to include this factor in their analysis. That would likely skew the results.

Similarly, producing large amounts of meat in the confines of a lab would reduce the conversion of forested land into pasture for farming cattle–in turn keeping more CO2 trapped in the ground. This is a benefit of lab-grown meat that wasn’t thoroughly explored in the study.

The paper makes another potentially problematic assumption, which is that labriculture will always rely on fossil fuels to power its operations. However, renewable energy could potentially provide some of that energy in the future–especially likely in an industry that’s trying to be green. If that happened, it would completely change the high emissions profile of lab-grown meat that’s presented in this study.

Nevertheless, what the research does prove is that when estimating the climate impact of food, relying on CO2 equivalents alone could be misleading. Methane doesn’t have the same long-term climate impact as some studies suggest, and this way of thinking about emissions may actually minimise CO2’s cumulative role in altering our climate.

The study also underscores the valuable fact that renewable energy streams will be essential to producing lab-grown burgers and the like, if they’re to have a place in our sustainable food future.