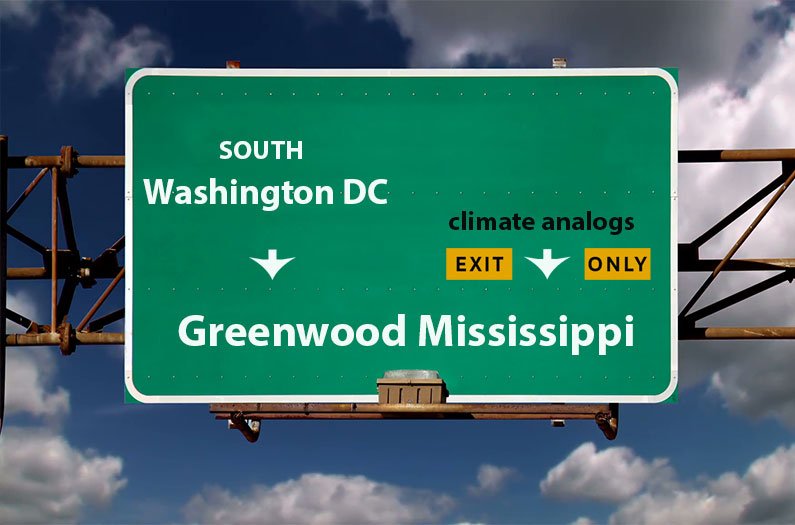 For a glimpse of the future, head a day’s drive South

A study that maps climate analogs—matching the predicted future climate in one location to the current climate in another—finds that many North American cities are in for an unfamiliar future.
By Sarah DeWeerdt
February 12, 2019

When it comes to climate change, scientists tend to talk numbers: a 3 °C increase in average temperature, for example. But such predictions are abstract and remote from everyday life, making it difficult for regular people to grasp the real-world consequences of climate change.

To address this problem, researchers have developed the concept of climate analogs, which involve matching the predicted future climate in one location to the current climate in another.

The goal is to raise individuals’ level of concern about climate change, as well as give local authorities tools to help prepare for the future.

In a paper that appears today in Nature Communications, researchers mapped climate analogs for 540 North American cities – including 530 in the United States and 10 in Canada – with a total population of 250 million people.

They used a suite of 27 computer climate models to predict the climate of each city in 2080 according to 12 different variables: maximum and minimum temperature and total precipitation in each of four seasons. Then, they looked for locations where the current climate is most similar to that suite of predicted future values.

The researchers ran one analysis assuming that high carbon emissions will continue throughout the century, and another to explore what will happen if carbon emissions are curtailed to a modest degree.

Even in the optimistic emissions scenario, by the 2080s the “climate of North American urban areas will feel substantially different than they do today, and in many cases unlike contemporary climates found anywhere in the western hemisphere north of the equator,” the researchers write.

In the moderate-emissions scenario, the climate of the average North American city will be most like the current climate of locations about 515 kilometers away, mainly to the south. Under high emissions, the average distance between a city and its climate analog is about 850 kilometers.

For example, if emissions are brought in check Washington D.C. will have a 2080 climate most similar to that of Paragould, Arkansas today. If high emissions continue, the best contemporary climate analog is Greenwood, Mississippi.

For such cities, “the most informative finding is not necessarily the contemporary climate of the best analog but rather the extreme dissimilarity and therefore novelty of the urban area’s future climate,” the researchers write. That, of course, makes it harder to plan climate adaptation measures.

Moreover, current emissions are actually higher than those in the high-emissions scenario, so shifts to novel climates could occur earlier than the 2080s – leaving cities even less time to adapt.

The current study focuses on North American cities. Cities at lower latitudes, such as in Central and South America, may be even more likely to experience novel climates by the late 21st Century, says Matt Fitzpatrick of the University of Maryland Center for Environmental Science. Fitzpatrick conducted the new study with applied ecologist Robert Dunn of North Carolina State University. The researchers aim to expand their analysis to cities in other regions.

In the mean time, they have developed a website where users can look at predictions for individual cities in more detail. Playing around with it is pretty fascinating. But the study’s results are also unsettling. What does it say about our future that a method developed to make climate predictions more “relatable,” as the researchers put it, winds up pointing out just how different things are likely to be from any climate we’ve known?