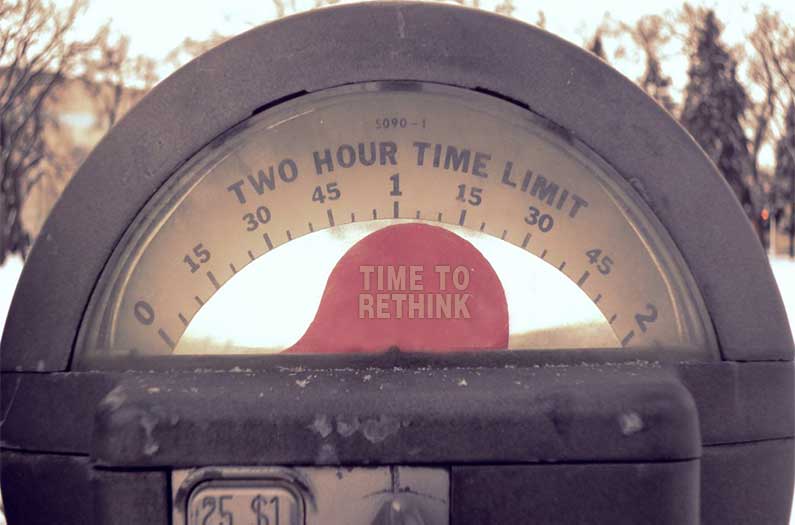 How to plan for a post-parking future

Currently, many cities charge high prices for parking in the downtown core. This is an effective strategy to discourage people from driving in to the center city and keeps traffic congestion in check. But self-driving cars could totally upend this system.
By Sarah DeWeerdt
February 19, 2019

It’s a nightmarish vision of San Francisco’s future, like something out of science fiction: streets full of driverless cars, crawling along implacably but at a snail’s pace, snarling traffic and bringing the city to a standstill from the iconic Ferry Building to Union Square.

But according to Adam Millard-Ball, associate professor of environmental studies at the University of California, Santa Cruz, this scenario could come to pass simply as a result of rational behavior on the part of autonomous vehicle owners. Congestion pricing that imposes a fee or tax for driving in the downtown core could help prevent this future, but cities need to act fast, before self-driving cars are common, he argues.

Those conclusions emerge from an analysis published in the journal Transport Policy, in which Millard-Ball used game theory and a computer model of San Francisco traffic patterns to explore the effects of autonomous vehicles on parking. He found that the gridlock happens because self-driving cars don’t need to park near a rider’s destination – in fact, they don’t need to park at all.

Many studies have tried to predict the impacts of an autonomous vehicle future on travel habits and traffic patterns. But relatively few have looked specifically at parking behavior.

Millard-Ball analyzed three strategies autonomous vehicle owners could instruct their cars to adopt in order to avoid paying for parking on trips to the downtown core: drive to a different part of the city with free on-street parking, drive home where a designated parking space is presumably available, or simply cruise around the streets. He assumed that owners will, sensibly enough, choose whichever option is cheapest for each trip.

(The remaining roughly 40% of trips to downtown already involve free parking, such as an employer-provided spot; the analysis assumes these trips wouldn’t change.)

Currently, many cities charge high prices for parking in the downtown core. This has been an effective strategy to discourage people from driving in to the center city and keep traffic congestion in check.

But self-driving cars could totally upend this system. Millard-Ball calculated that the ability to avoid paying for parking would encourage people to make more trips downtown using private cars. This, combined with the increased miles traveled due to cruising, returning home, or driving to free parking, would more than double vehicle travel to, from, and within downtown San Francisco.

Recommended Reading:
In rich countries, a sustainable diet is cheaper than a conventional one. The opposite is true in poorer nations.

“Parking policies that have allowed dense, urban centers to flourish will no longer be a major curb on vehicle travel in an autonomous vehicle world,” Millard-Ball writes.

What’s more, the cruising strategy has the potential to cause awful traffic jams. That’s because the cost of cruising depends on a vehicle’s speed. The slower a vehicle goes, the lower the cruising cost per hour.

This means that autonomous vehicles could reduce costs for their owners by seeking out the most congested streets to cruise on – thereby turning certain streets into giant, slow-moving parking lots.

“They will have every incentive to create havoc,” Millard-Ball, who apparently does not welcome our new robot overlords, said in a press release.

The traffic model suggests that with fewer than 4,000 autonomous vehicles cruising to avoid parking fees – a fraction of peak parking demand in San Francisco – traffic could slow to less than 2 kilometers an hour. At that speed, the hourly cost of cruising is a measly $0.48. But the city as a whole pays the price. (Those figures assume the autonomous vehicles are electric, but Millard-Ball found similar results for gasoline cars.)

If autonomous vehicles are shared rather than individually owned – basically a fleet of driverless taxis – that could mitigate the parking challenges somewhat. Still, much of the fleet would be idle during non-peak times, so there would still be an incentive to cruise or otherwise avoid parking fees.

Cruising would be difficult to regulate because it’s hard to tell the difference between a self-driving car that is cruising and one that is delivering a parcel or on its way to pick up a passenger – that is, one that has a job.

Congestion pricing that includes both a distance-based charge and a time-based charge could help eliminate incentives for cruising. But cities should implement such policies now, when there’s no established group of autonomous vehicle users to object, Millard-Ball argues. After all, cities have had trouble implementing congestion pricing for standard cars because motorists don’t want to have to pay for something they’ve historically gotten for free. Once the robots are here, it may be too late to stop them.