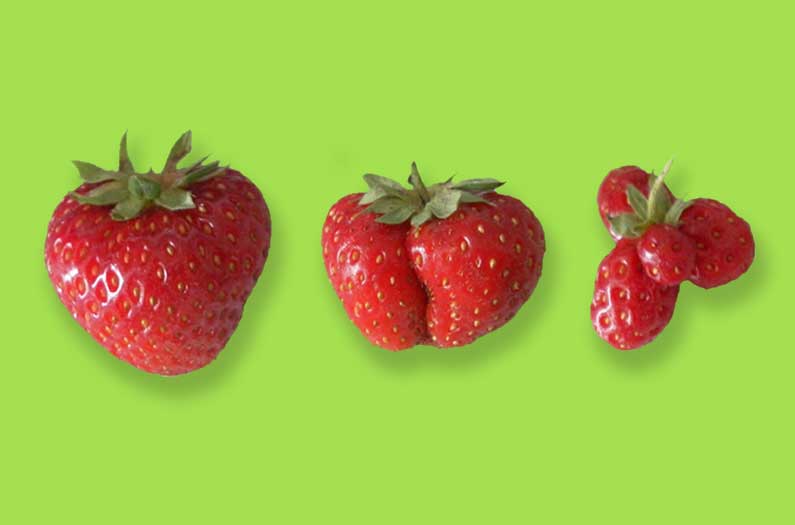 A new study makes a direct link between the number of pollinators on farmland, and the size, quality, and marketability of fruit.
By Emma Bryce
March 1, 2019

One of the many contradictions of agriculture is that by eating into wild habitat and imposing monoculture on the landscape, it displaces the pollinators that could be so beneficial to its yields. The new study, led by the University of Göttingen in Germany, showed that hedgerows–bands of dense, woody vegetation–seem to remedy some of these concerns by providing habitat for insect pollinators.

The researchers tested their idea by growing strawberry plants in three farmland locations in Germany: firstly, at sites surrounded by nothing but grassland; secondly, beside isolated hedgerows surrounded by arable land; and finally, beside hedgerows that were connected to wild forested land. Strawberry bushes grown with only grassland as company were at a stark disadvantage: the fruits on these plants were 20% smaller, and 37% lower in weight than the strawberries grown beside forest-connected hedgerows. On the other hand, the latter had a noticeable advantage–not only in terms of size and weight, but in their commercial value for farmers, too.

Ninety percent of strawberries grown beside forest-connected hedgerows met commercial standards, compared to just 48% of the berries grown in purely grassy habitats with no hedgerows. When the researchers analysed the produce according to European market standards, they found that almost a third of the fruits grown beside the forest-linked hedgerows would also be considered as exceptional produce that would fetch a higher market price.

These luckier berries seem to have benefitted from a wealth of industrious pollinators–especially wild bees–harbored in the forest that then spilled over into the connected hedgerows. That was confirmed in experiments, which showed that these particular hedgerows did indeed have the highest number of resident pollinators. (Growing strawberries beside isolated hedgerows also provided a pollinator advantage over strawberries marooned in grassland–but the benefit wasn’t as great as in forest-connected hedgerows, the study found.)

This is also proof that hedgerows can play a vital role as connectors of fragmented habitat, building green corridors through which wildlife can navigate our industrial farmscapes.

The larger fruit productivity also translates into major financial wins for the farmer: strawberries grown near forest-linked hedgerows would increase revenue by an incredible 61% compared to their less-pollinated counterparts, the study found. And strawberries aren’t the only possible beneficiaries. Another study recently published in the same journal showed that wild pollinators on blueberry farms in the United States could increase revenues there by up to 36%.

The economic gains demonstrated in both studies make a strong case for farmers to attract more wild pollinators to their land–and building in connected hedgerows is one especially powerful way of doing that, it seems.

It also gives a hopeful glimpse into how we might begin to usher in a more considerate era of agriculture in the future–one that benefits both us and the wild.

Image: Inadequate pollination by insects can lead to yield and quality losses with agricultural crops, e.g. deformed fruits in the case of strawberries.