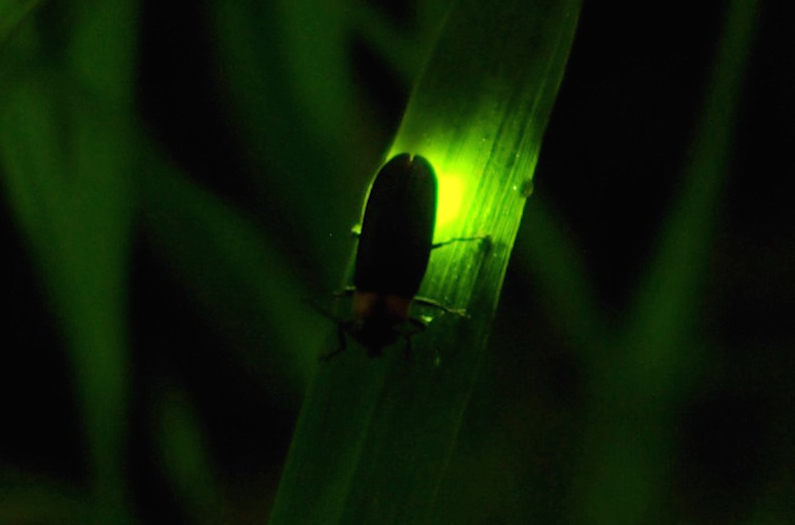 By mimicking the lopsided pyramidal structures found on firefly bellies, researchers have come up with a new light-emitting diode (LED) that could use less energy than today’s LED light bulbs.
By Prachi Patel
March 7, 2019

Symmetry isn’t always appealing. By mimicking the lopsided structures found on firefly bellies, researchers have come up with a new light-emitting diode (LED) that could use less energy than today’s LED light bulbs. The design, reported in the journal Optik, consists of sharp, tilted pyramidal structures on the top surface of an LED. The unique shape significantly boosts the amount of light that LED light bulbs emit using the same electrical energy.

The explosion of LED light bulbs in offices and homes could save almost 350 terawatt-hours or energy by 2027, according to the Department of Energy. That’s as much as the electricity produced in California and New York combined in 2017. Light-emitting diode light bulbs use 75 percent less energy than old incandescent bulbs. But they still have issues. One of the biggest culprits for LED inefficiency is that around half of the light produced in the device gets reflected back into it, where it can turn into heat.

Researchers have used several different strategies to minimize this reflection and get more light out. A key technique involves etching the surface to create microscopic structures that bounce light back and forth in a randomized way that ejects more of from the LED. These structures have usually been symmetrical.

But electrical engineering professor Shizhao Yen and their colleagues at Pennsylvania State University found that the glowing abdomens of fireflies are covered with slanted, asymmetrical triangular shapes. They ran simulations of sapphire LED substrates covered with such tilted pyramids.

The asymmetrical structures gave a light-extraction efficiency of 90 percent, while simulated LEDs with symmetrical structures and flat surfaces had efficiencies of 75 percent and 20 percent respectively. The researchers believe this is because the tilted pyramids have a larger surface area and better randomization of the light.

To test the concept experimentally, the team made lopsided and upright pyramidal arrays on sapphire substrates. They coated the textured substrate with a fluorescent dye. When they shone a laser on the surface, the asymmetrical pyramids gave off more intense fluorescence signal.

The researchers are now patenting the idea to commercialize it.