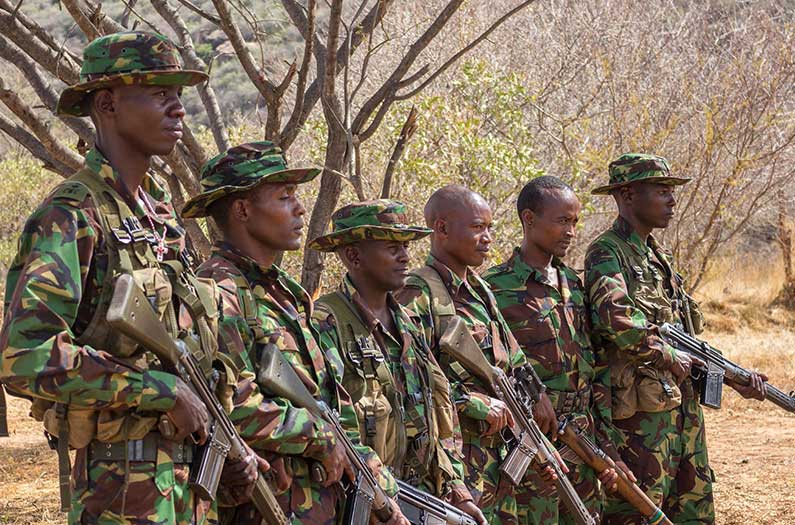 Could conservation become locked in a cycle of violence?

Confronted with the brutality of wildlife poaching, the urge to hurt the perpetrators is primal. It might even be an effective conservation strategy — but for how long? And at what cost?
By Brandon Keim
March 13, 2019

Confronted with the brutality of wildlife poaching, the urge to hurt the perpetrators is primal and understandable. A military response might even be an effective conservation strategy — but for how long? And at what cost?

These are not brand-new questions, but are once again in the public eye following recent allegations that the World Wildlife Fund, one of the world’s largest conservation organizations, turned a blind eye to human-rights atrocities committed by paramilitary guards hired to protect animals.

The WWF is not alone in their use of force: over the last few decades, military-style responses to the slaughter of rare, charismatic animals have become steadily more popular. Supporters argue that desperate peril calls for desperate measures. Critics respond that wars, no matter how nobly-intentioned, often go terribly wrong.

“Amidst the sense of urgency to save wildlife and prevent extinctions via any means necessary,” write researchers in the journal Biological Conservation, “those who favor and support militarization have not paid enough attention to how it will fundamentally reshape conservation in the longer term.”

Led by political ecologists Rosaleen Duffy and Elizabeth Lunstrum of, respectively, Sheffield University and York University, the researchers weave together critiques that have emerged from social scientists documenting militarized conservation in southern and equatorial Africa, South Asia, and Central America.

Poachers are the targets, but not the only victims. Residents of communities where poachers are thought to live may find themselves under suspicion — and not just by eco-guards, but by poachers paranoid about snitches. The use of informant networks can create an atmosphere of poisonous distrust.

When innocent people are mistreated, antagonism towards conservationists and the wildlife they represent flourishes. Grievances with deep historical roots are freshly inflamed. In places like southern Africa, where the dynamics of modern-day conservation are linked to colonial practices that excluded entire communities from the landscapes they once called home, it’s no small thing.

“Militarized conservation can mirror and recreate past injustices,” write Duffy and colleagues. “Tactics in specific contexts in South Africa often resemble apartheid-era counterinsurgency practices, where efforts to win the support of local people also coincide with tactics of intimidation and use of violence.”

Over it all hangs the fog of war. Reports of rangers killed in the line of duty rarely mention “that people other than rangers were also killed,” write the researchers, “or that rangers were engaged in destroying homes or fields as part of their operations.” The rangers’ own traumas can be overlooked; many of them didn’t sign up for armed combat, and they may fear retaliation for informing superiors about abuses committed by trigger-happy comrades.

Alternatives to militarization may be neglected. Funds are diverted from ecological monitoring.  Potentially more-effective approaches, such as focusing on market demand for wildlife products rather than their supply, and emphasizing wildlife-friendly economic development that give people alternatives to killing animals, receive less attention.

Such programs are not so compelling as fighting fire with fire — and it can be hard for conservation organizations that have invested in military strategies, not just financially but with their reputations, to stand down. Transparency suffers; costs are hidden, and rigorous evaluations of whether militarization is actually effective are few.

As with conventional militaries, the adoption of martial strategies “can be driven by the demand for private sector actors seeking to expand into new markets.” Here the researchers mention the development of ecotourism in Guatemala, which has “become a means by which the Guatemalan state has revived and repurposed tactics of counterinsurgency warfare derived from the country’s civil war.”

None of this detracts from the urgency of protecting endangered animals from species-level extinction and individual-level suffering. But in the long run, argues Lunstrum, military intervention “alienates those communities conservation needs for its long-term viability.”

“Justice for animals is not well served by perpetrating other injustices,” says Duffy. “We need to develop a just system for all.”

Source: “Why we must question the militarisation of conservation.” Biological Conservation, 2018.