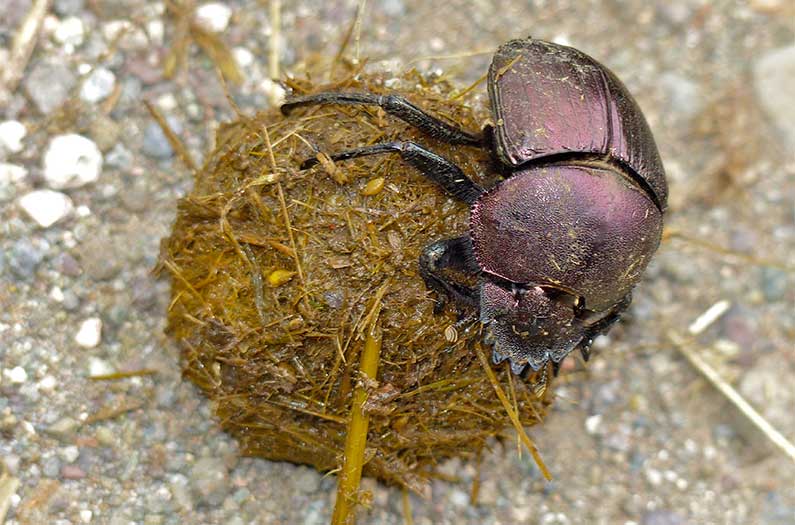 Organic agriculture could reduce the spread of food pathogens

Farms that include wild habitat boost soil diversity and support more dung beetles: these could be a crucial first line of defence against foodborne pathogens that kill thousands globally.
By Emma Bryce
March 22, 2019

Organic farms are home to a greater diversity of soil microbes and insects, that could fight off the threat of deadly food-borne pathogens, a new study shows.

Writing in the Journal of Applied Ecology, a team of international researchers explain that the spread of pathogens, such as fecal E.coli bacteria, on farmland, has caused thousands of deaths and millions of illnesses globally. That’s driven farmers to remove natural habitat like hedgerows and ponds from their land, because they’re thought to attract wild and domesticated animals which cause the problem by fouling nearby crops with their pathogenic feces. While this more simplified vision of farmland may threaten biodiversity and reduce crucial ecosystem services like pollination, it’s nevertheless seen as an essential move for food safety.

Yet, the new study actually reveals the opposite, showing that as wild habitat disappears, so too do microbes and insects–like the ever-industrious dung beetle–which can actually help to eradicate pathogens from the soil.

To make this discovery, the researchers surveyed 70 commercial broccoli fields–a crop susceptible to food-borne pathogens because it’s grown close to the ground–in the western United States. They compared conventional farms, and organic farms–where wild features were kept intact and pesticide-use minimised. By scattering pig feces across these plots to attract feces-feeding dung beetles, they found that organic plots supported greater numbers of these insects. On those farms, dung beetles cleaned up about 90% of feces in a matter of days, much more quickly than on conventional farms where there were fewer beetles to be found.

The researchers also sampled the soil across these farms and found that organic plots had more organic matter in the soil. This supported a higher diversity of soil microbes when compared to conventional farms–with possible benefits for controlling foodborne pathogens.

The researchers also carried out laboratory experiments to test whether soil bacteria and dung beetles were actually reducing the level of harmful E.coli bacteria, not just removing the waste. These showed that both the beetles and the soil bacteria did in fact suppress the amounts of pathogenic E.coli bacteria in the tested samples. Soil microbes tend to compete with each other–which explains why a greater diversity of bacteria would help to suppress the level of E.coli there. No one knows for sure why dung beetles also have this effect, but separate research suggests that it’s possible their bodies contain anti-microbial properties that wipe out the bacteria in the feces, as they process it.

This doesn’t necessarily mean pure organic agriculture is the solution: rather, the findings suggest that farms that contain natural habitat and more biodiversity will likely have enriched soil and more insects. In turn, this natural clean-up crew could put up a powerful front against food-borne pathogens. On the other hand, conventional farms that eradicate natural habitats may actually be more susceptible to a pathogenic outbreak.

The study draws a strong link between farmland biodiversity, and our health. So perhaps, when we think over the benefits of preserving natural habitat on farms, we should go beyond pollinators, the researchers suggest: “Improved food safety may be an important, and perhaps underappreciated, ecosystem service that is enhanced by on-farm biodiversity.”