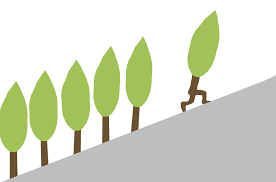 18 countries have started to decarbonize. What’s driving the change?

The biggest contributor to declining emissions was replacement of fossil fuels by nuclear and renewable forms of energy. Improved energy efficiency also made a big difference.
By Sarah DeWeerdt
March 5, 2019

Globally, carbon dioxide emissions are still rising: emissions increased by 2.2% per year between 2005 and 2015. But in some countries, emissions fell consistently during that decade.

In a paper published 25 February in Nature Climate Change, researchers analyzed the mechanisms behind declining emissions in 18 countries – and how to ensure those trends continue.

The countries with declining emissions include the United States and many countries in Europe. Of course, emissions are still high in these countries, and need to come down a lot more in order to avert catastrophic climate change. Still, the 18 countries are responsible for 28% of global carbon emissions. So when they curtail emissions, it makes a difference.

In the study, an international team of researchers mined various existing databases for information on energy use, carbon emissions from fossil fuels, economic growth, and climate-related policies in different countries.

They found that in the declining emissions group, carbon emissions from fossil fuels decreased by an average of 2.4% per year from 2005 through 2015.

Overall, the biggest contributor to declining emissions in the 18 countries was replacement of fossil fuels by nuclear and renewable forms of energy. Lower energy use – achieved by improved efficiency of appliances, furnaces, cars, and so on – also made a big difference.

But there are wide variations between individual countries. In the U.S., the largest driver of emissions cuts was a switch from coal to natural gas as a result of the fracking boom. (Natural gas is a less “carbon-intense” form of fossil fuel than coal, meaning that it results in lower carbon emissions per unit of energy extracted.)

In the early 1990s, many wealthy countries began to essentially “outsource” carbon emissions through international trade – that is, emissions that originated from poorer countries supported consumption in wealthier ones. However, this phenomenon did not contribute much to the emissions declines from 2005-2015.

In general, energy use and carbon emissions are linked to economic growth. An economy growing at a healthy clip means more manufacturing, more goods and people moving from place to place, and thus more carbon emissions. In contrast, carbon emissions tend to fall during recessions.

The researchers found that during 2005-2015, the gross domestic product (GDP) of the 18 countries with declining carbon emissions grew at 1% per year. The energy intensity of their GDP – that is, the amount of energy required to produce a given increase in GDP – fell by 1-2% per year. The analysis suggests that decreases in energy use in these countries can be explained in part by relatively sluggish GDP growth. If these economies heat up, energy use could increase again, the researchers say.

Finally, the researchers counted the number of climate and energy policies in each country as a broad indicator of government commitment to reducing carbon emissions.

These findings suggest that energy and climate policies can help keep carbon emissions in check, at least in wealthy countries. But to ensure that emissions continue to decline over the coming decades, these countries will need even stronger public policy support for addressing climate change, especially if GDP growth increases.

And emissions cuts need to accelerate – not just continue – in these countries. The emissions reductions achieved so far “fall a long way short of the deep and rapid global decarbonization of the energy system implied by the Paris Agreement temperature goals,” the researchers write.

Still, the analysis suggests a cause for optimism. We’re used to thinking of decarbonization as a mysterious process that we must begin at some point in the future. That sense of unfamiliarity can create a barrier to getting started. But in fact, decarbonization means doing what we’ve already begun – just a lot faster, more intensively, and more broadly.