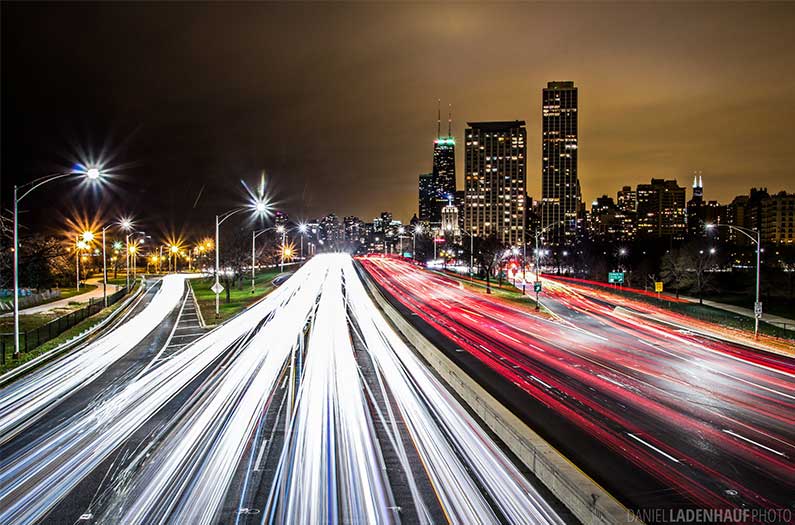 The coming transportation revolution could offer a chance to solve the little-appreciated but far-reaching problem of automotive light pollution.
By Brandon Keim
April 10, 2019

Within the next several decades, most of the industrialized world’s cars and trucks could be replaced by autonomous vehicles. That transformation may provide an opportunity to fix some of what’s now broken with modern transportation—including, perhaps, light pollution.

That might seem an odd intersection of environmental concerns and driverless technologies. Ethical concerns about the vehicles have focused on avoiding harm to humans, with a bit of attention paid to reducing the number of animals struck by cars. The possibilities for improvement hardly end there, though, and transportation-related light pollution is no small issue.

“The introduction of autonomous vehicles is a rare and pivotal opportunity to take up this challenge,” write researchers led by Taylor Stone, an industrial designer at Delft University of Technology, in the journal Science and Engineering Ethics. “At the least, autonomous vehicles should be designed to reduce the adverse effects of light pollution. More radically, they can strive to create darker nights and play a role in re-imagining urban nightscapes.”

At present, say Stone and colleagues, street and parking lot lighting accounts for some 90 percent of outdoor illumination in the industrialized world. Roughly two percent of all energy used in the European Union goes into streetlights; globally that figure is about 1.6 percent, and headlights consume about 3 percent of vehicular fuel.

That’s a lot of energy—and, as far as streetlights go, much of it is wasted. It’s energy literally beamed into the night sky, in the process obscuring our view of the universe and wreaking biological havoc: luring insects to their doom, disorienting turtles and frogs and salamanders, messing with the metabolisms of birds—and people—exposed to their constant glare, and so on.

Given that human drivers need light to see, all this understandable if regrettable.If automated eyes don’t need artificial illumination to navigate, though, how much of that light might be dimmed?

“The vehicle-focused lighting strategies of the 20th century can be replaced with alternative approaches, which actively strive to bring some darkness back into urban nightscapes,” write Stone’s team. They describe two hypothetical scenarios: one in which automated cars drop their passengers off and then find parking in unlit lots, and another in which highways no longer require lighting except for emergencies and at exit ramps where human drivers take back the wheel from their algorithmic chauffeurs.

Both scenarios come with plenty of as-yet-unaddressed complications, including the development of necessary technologies and the question of how unlit cars would impact wildlife. Getting people to embrace less-bright nightscapes would require plenty of social engineering, too. Illumination is intertwined with security, both perceived and real.

“Seeing darkness as positive may sound like a radical shift,” says Stone. “But if we think about it slightly differently, it can become less radical.” Reducing energy costs, seeing the Milky Way, killing fewer migratory birds, mitigating the human health effects of circadian rhythm-disrupting light: all these are things most people want.

The trick, believes Stone, is making the connection between darkness and our values explicit. “We can then start to re-imagine how our future nightscapes could achieve a better balance of artificial lighting and darkness,” he says. The possibilities certainly don’t end there. People have only just started to consider the full implications of autonomous vehicles and the infrastructure that goes with them.

“We have an opportunity to consider a broad range of social and environmental goals,” says Stone. “Now is the time to think critically and creatively about what this new technology can and should achieve.”