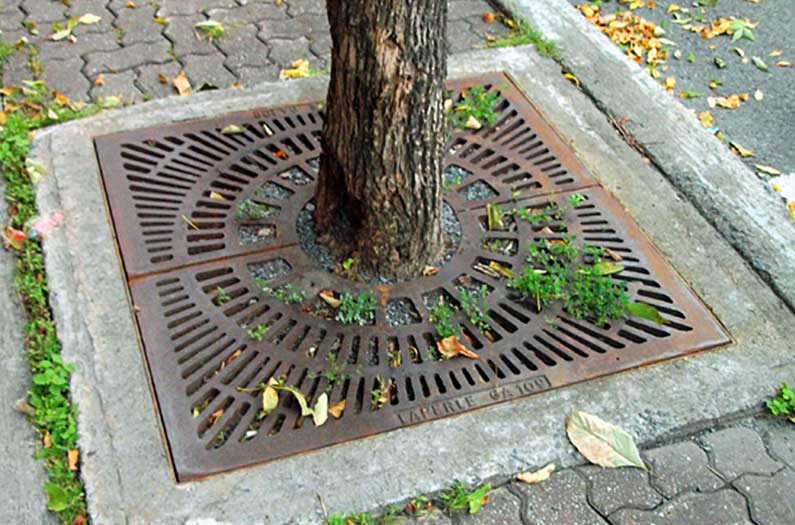 Planting trees is generally thought to be a good strategy for mitigating the urban heat island effect, the tendency for cities to be several degrees warmer than surrounding rural areas. But scientists haven’t been able to say just how much tree cover cities need in order to counteract the increase in urban temperature from pavement and concrete.

A study published April 9 in the Proceedings of the National Academy of Sciences takes a first crack at providing some quantitative answers. It suggests that trees are especially important for keeping heat in check during the day. But for relief from sweltering temperatures at night, cities still need to minimize pavement.

In the study, researchers from the University of Wisconsin in Madison mounted a temperature sensor and a GPS device to the back of a bicycle. The setup recorded temperature at one-second intervals as the researchers cycled around Madison during the summer of 2016.

They made a total of 64 roughly half-hour bike rides along 10 routes through the city during the hottest hours of the day. They also completed 12 nighttime rides along 4 of the routes.

Back in the lab, the researchers calculated the difference between the temperature at a given point and that recorded by a set of reference sensors in the center of the city, where temperatures tend to be the highest. They analyzed how the amount of tree cover and impervious surface (such as pavement and building roofs) surrounding a given spot influences the temperature there.

But, overall, “the relative benefit of increased canopy cover in the surrounding landscape exceeded that of reducing impervious surface cover” in terms of reducing daytime temperatures.

Where canopy cover was at least 40% within a radius of 60 to 90 meters (roughly the scale of a city block), “the warming effect of impervious surfaces was effectively countered by the cooling effect of trees,” the researchers report.

At night, temperatures within the city are less variable, with an average difference of just 2.1 °C between the warmest and coolest spots on a bike route. Canopy cover has relatively little effect on temperature, and the amount of impervious surface has more.

Reducing nighttime temperature is especially important from a public health perspective; during heat waves, people’s bodies need time to recover from daytime heat. For this reason, reducing pavement as well as planting trees has to be part of cities’ climate mitigation strategies, the researchers argue.

Past studies have shown that parks and green spaces tend to be “cool islands” within a city. It may be easier to plant more trees on an individual property than to carve out new parks, so the finding that trees can diminish the urban heat island effect at relatively fine spatial scales is good news.

But putting these insights into practice will be complicated. The relationship between canopy cover and temperature is not linear. This suggests that the most efficient way to lower temperature with trees is to plant more of them where some are already growing.

But that strategy could magnify socioeconomic and racial disparities in health, since greener neighborhoods also tend to be wealthier, whiter ones. Plus, poorer neighborhoods are in greater need of urban heat island mitigation because they have less access to air conditioning.

The researchers also found that tree canopy cover has the strongest effects on daytime temperatures on the hottest summer days. “Thus, the benefit of growing the urban canopy may be amplified on days with more extreme heat,” the researchers write.