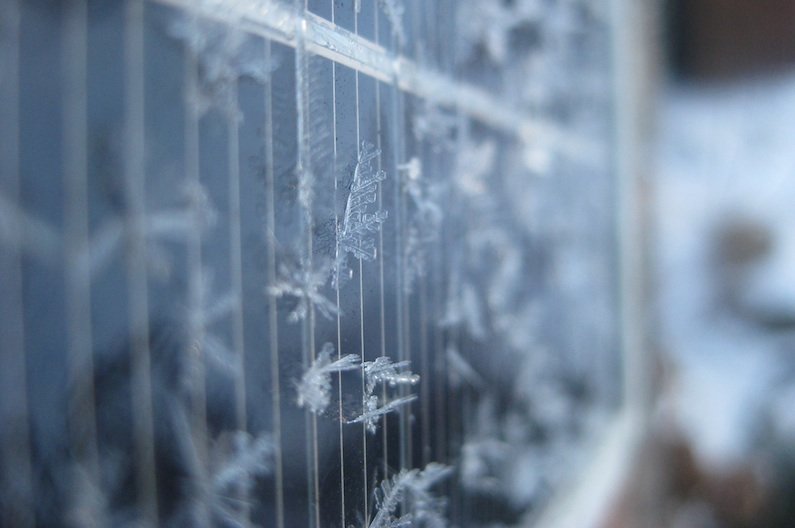 A thin, stretchable device that produces electricity when snow falls on it could be integrated into solar panels, boosting solar power output when it snows.
By Prachi Patel
April 25, 2019

Spring is in the air. But just a month ago, solar panels in parts of the country were covered with snow, the slightest dusting of which makes their output plummet. That might change with a new device that generates electricity from snow.

The snow-based energy-generator, reported in the journal Nano Energy, is a thin, flexible film that produces electricity when snow falls on it. It could be integrated into solar panels, where it shouldn’t affect the sunlight getting through to the solar cells but would help to continuously generate power when it is snowing.

The device relies on the triboelectric effect, which is the phenomenon behind static electricity. When two different surfaces rub against each other, electrons move from one material to the other, causing a buildup of opposite charges on the two surfaces. This causes an electric current to flow between the surfaces. Researchers have used this effect to generate electricity from motion, muscle movement, wind, and rain.

Snow is positively charged. So engineers and chemists at the University of California, Los Angeles thought that if they put it in contact with a negatively charged surface, it would generate electric current. After testing different materials such as Teflon and aluminum film, they decided on silicone, which produced the highest current.

The team used 3D printing to deposit the silicone layer and electrode on a flexible, stretchable base. The simple printable device could be produced for a low cost, they say.

In addition to harvesting energy from snowfall, the device could be used as a mini self-powered weather station in frigid environments. That’s because the sensor can monitor snowfall rate, accumulation depth, wind direction, and speed in real-time. It could also be attached to the bottom of boots or skis and used to collect data that helps train and monitor athletes who compete in winter sports.