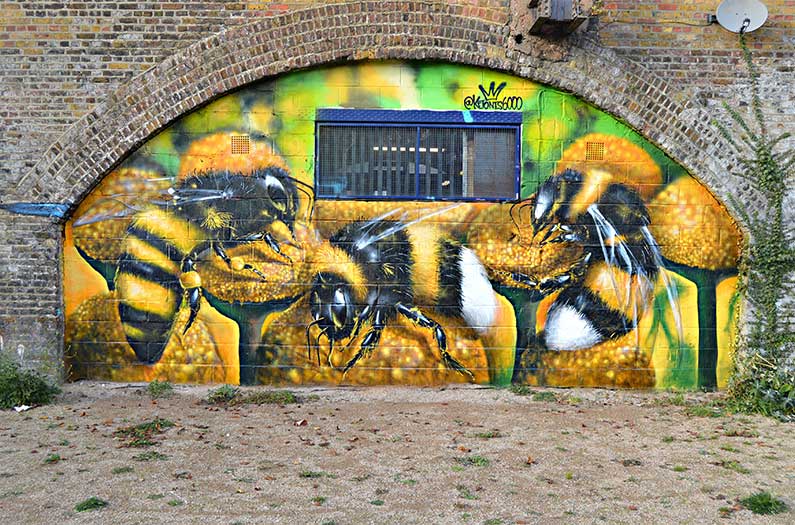 Urban “wastelands” are a paradise for bees

A growing appreciation of how bees can thrive in urban environments has led many city dwellers to protect their habitat. Pollinator gardens are a regular feature of neighborhoods and schools; parks and nature sanctuaries are managed with bees in mind. Yet one potentially bee-rich environ still receives relatively little attention: urban wastelands.

“Proper management of urban natural resources should cover both the formally managed areas and the so-called unproductive spaces, which have been undervalued,” write ecologists Lucyna Twerd and Weronika Banaszak-Cibika, both of Poland’s Kazimierz Wielki University, in the Journal of Insect Conservation.

They counted 201 species altogether: honeybees and bumblebees, sweat bees and leaf-cutting bees, hive-dwellers and soil-dwellers, altogether representing some 42 percent of all bee species ever reported in Poland. A former chemical plant contained the lowest bee diversity, while old mining pits and city-edge grasslands contained the most.

That profusion is not surprising. So-called wastelands tend to be sun-drenched and in the early stages of ecological succession, with flowering plants present in abundance. They may also contain large patches of bare soil, a feature that’s generally frowned upon—or at least filled—in parks and other managed spaces.

Twerd and Banaszak-Cibicka’s findings fit with a growing body of research on the biological richness of land considered vacant. Protecting those habitats, however, can be a challenge. In addition to the economic pressures of development, vacant areas are often perceived as eyesores: places that have fallen into disuse, rather than a source of wild life.

Read:  The outsized potential of the wealthy and well-connected to accelerate climate action

Other researchers have suggested that “cues of care”—tidy footpaths, patches of tended vegetation—can help people feel better about vacant land while preserving the features that make it so biologically abundant. That challenge falls outside the scope of the present study, but a first step, and perhaps the most important one, is simply learning to appreciate these places.

“Although the environmental value of wastelands is appreciated more and more often, so far they have been rarely intentionally used to support urban biodiversity,” write Twerd and Banaszak-Cibicka. “Some types of wastelands can be environmentally valuable spaces and should be cared for, very much like urban managed green areas.”

Source: Twerd, Lucyna and Banaszak-Cibicka, Weronika. “Wastelands: their attractiveness and importance for preserving the diversity of wild bees in urban areas.” Journal of Insect Conservation, 2019.