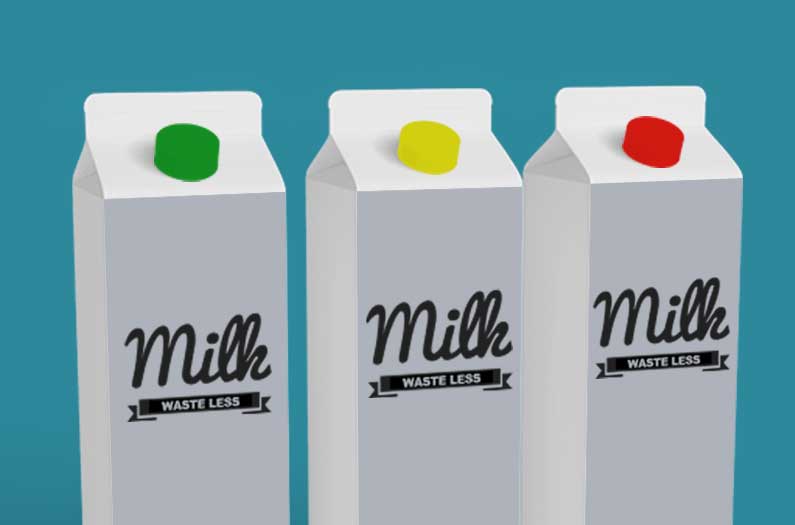 Never mind the smell test: researchers have developed a new way to detect when milk has gone off, which potentially could save thousands of gallons from being glugged down the drain.
By Emma Bryce
May 10, 2019

Researchers have developed a new technique that can pinpoint, in real-time, the moment at which milk spoils inside a carton. In their new study, published in the journal Food Control, they suggest that if their invention is integrated into the caps of milk containers, it could one day replace less-accurate sell-by-dates – and save a huge quantity of milk from being wasted every year.

Milk goes off because of microbial growth that occurs over time, emitting increasing amounts of volatile organic compounds (VOCs) – such as aldehydes and ketones – that change the liquid’s flavour and smell.  The researchers’ invention is premised on the idea that if we could detect these compounds as they accumulate, it would cue us on when milk has reached its peak.

To do this as cheaply and efficiently as possible, the researchers created something called a ‘colorimetric sensor’ made from just two ingredients: Schiff’s reagent, a substance which changes colour when it detects volatile organic compounds; and silicon dioxide, a mineral which can be ground down into nanoparticles, creating a large surface area and a suitable substrate.

They coated a fine layer of the silicon dioxide nanoparticles with the reagent, and then hovered the mixture over several different samples of milk, which were stored at temperatures between 7 ℃ and 19 ℃. They found that as the milk reached its peak and began to turn – a process that predictably took longer under lower temperatures, and quicker at high temperatures – the reagent-coated nanoparticles changed sharply from a pink to purple hue.

To check whether this colour change truly signaled that the milk was off, the researchers took parallel measurements of bacterial growth, and the quantity of volatile organic compounds, in the milk samples. This confirmed that the colour switching aligned with precise concentrations of bacteria and VOC levels that are known to cause spoilage in milk.

This meant that the colour-changing invention could accurately reveal when milk stored at various temperatures was no longer fit to be consumed.

Such measures could be hugely valuable, because the Food and Agriculture Organisation has estimated that globally, 20% of dairy products are wasted each year – and a huge chunk of that is made up of wasted milk. This occurs partly because sell-by-dates can’t accurately predict when milk will actually go off. “The expiration date on cold or frozen products is only accurate if it has been stored at the correct temperature the entire time,” the study’s authors explain. Variable storage, or gaps in refrigeration, might affect the accuracy of that date. In turn, this causes people to delay consuming milk because they think it’ll still be fresh for days, or it might even cause consumers to throw out milk before it’s actually gone off.

But having a sensor that monitors milk’s freshness in real-time – and which is easily visible to consumers in the lid of a carton – could potentially save gallons and gallons from being glugged down the drain.

The researchers now say they’re working on fine-tuning their invention: instead of just revealing whether milk is fresh or spoiled – as the current sensor does – they want to develop a more refined tool that shows consumers how many days are left before milk goes off. If they can accomplish that, and the dairy industry takes notice, it looks like we’ll be headed for a future of smart milk.