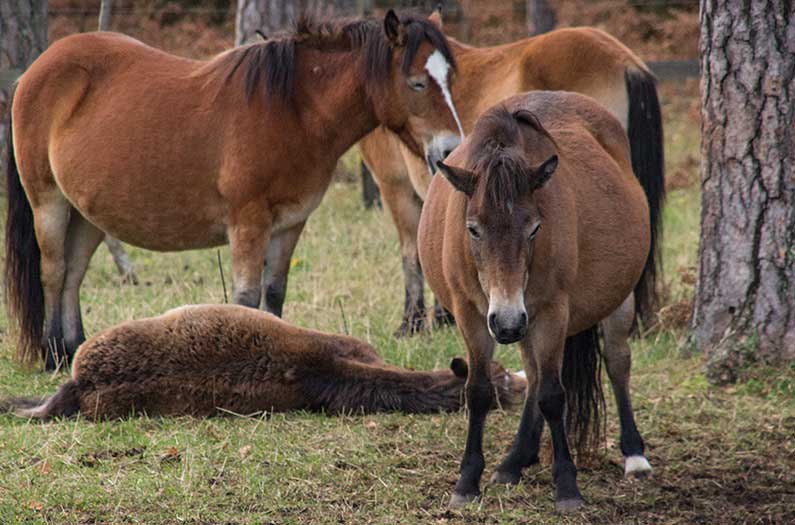 Wild horses are often viewed as alien, invasive creatures who don’t belong—but might they instead be seen as modern-day analogues of now-vanished species?
By Brandon Keim
May 22, 2019

Until quite recently in human history, and an eyeblink in the history of Earth’s ecologies, wild horses lived across much of the planet. They played significant ecological roles, maintaining grasslands and dispersing nutrients; they were also, as anyone who knows horses can attest, marvelous beings.

People drove them extinct, though, except for those harnessed for human use. (Even Przewalki’s horses, a Mongolian native long thought to be the last truly wild horse, now appear to be descended from ferals.) The only wild horses remaining are descendants of domesticated animals who escaped or were set free. They’re viewed by most conservationists and land managers as alien, invasive creatures who don’t belong.

Yet might they be seen differently: as modern-day analogues of now-vanished species? Might conservationists be advised not to lament their presence, but to work with it?

“Reintroducing an ecologically functional substitute of an extinct large herbivore could mitigate current biodiversity declines and foster semi‐natural grassland conservation,” write researchers led by biologists Pablo Garrido and Carl-Gustaf Thulin, both of the Swedish University of Agricultural Sciences, in the Journal of Applied Ecology.

The researchers think that Gotland ponies—an ancient breed thought to be derived from a now-extinct horse subspecies called tarpans—could perform some of the ecological functions once fulfilled by their ancestors. Foremost among these is the sustenance of grasslands, which in the absence of horses were maintained by traditional pasture-based farming practices. As small farms are abandoned, though, and remaining farms become intensified and industrial, grasslands are in danger of vanishing.

Garrido and colleagues introduced four feral Gotland ponies into each of three wood-pasture enclosures, each the size of about 10 soccer fields, on an estate near Uppsala, Sweden. Other large herbivores, namely moose and roe deer, do still live in the region, but both are browsers: they eat woody material, rather than consuming grasses as do horses.

Over the course of three years the researchers tracked plant and pollinator populations inside and outside the enclosures. Where horses grazed, the total number of plant species increased, as did populations of butterflies and bumblebees. The vegetation shifted towards a grassland state. “Ecological replacements of extinct wild horses can have significant effects on the functional composition of grasslands,” write Garrido’s team.

As to whether this lesson could apply to other feral horses, Garrido cautioned that longer-term experiments with different kinds of horses and habitats are necessary before making generalizations. Whether horse populations are regulated by predators and able to migrate are also important factors to consider.

That said, the findings at least point to a possible redemption for animals now regarded as ecological intruders. “I would love to see in the future a more harmonious human relation with nature,” says Garrido, “and a true respect for every sentient being and plant.”