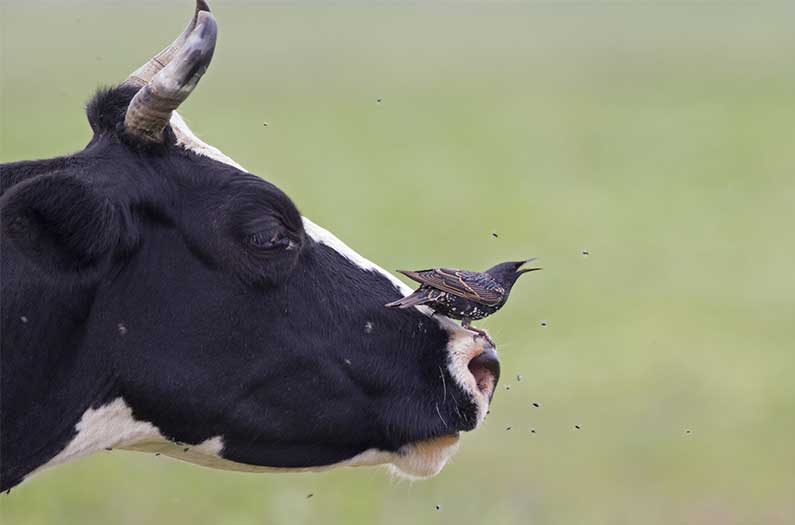 In Finland, farming subsidies that support organic animal farm is money well spent, finds a group of researchers, who identified a huge benefit to wild birds.
By Emma Bryce
May 24, 2019

Organic livestock farms in Finland offer a unique and surprising benefit to wild birds, a new study suggests. Agriculture is a major driver of biodiversity loss in Europe, but the PLOS One study is among the first to show that certain agricultural subsidies encouraging organic farming seem to be having a positive effect – while others may not be having their intended benefits.

It’s pertinent that these findings were made in Europe, where agriculture is a dominant land-use type, displacing untold amounts of wildlife every year. To tackle this loss, in recent years the European Union has rolled out a costly system of agricultural subsidies, designed to incentivise farmers to reduce farming intensity and protect biodiversity. These include measures like incorporating hedgerows onto farmland and practising the tenets of organic agriculture.

But it’s been difficult to measure the true benefits of these individual efforts across the region, and thus to find out whether they’re having their intended effects. So, the researchers decided to explore this question by looking at Finland – where 90% of agricultural land falls under a subsidy program or practices organic agriculture – and to analyse its impact on one form of wildlife: birds.

The researchers based their study on six years of data on the prevalence of 46 bird species across the entire Finnish landscape. This revealed that organic livestock farms support more long-distance migratory birds and insectivorous species – such as swallows and starlings – compared to other types of land. In fact, of all the biodiversity-boosting farmland measures subsidised by the EU, organic livestock farming was the only one that significantly correlated with higher numbers of wild birds.

Even compared to organic crop farms, the effect of organic livestock farms on bird abundance was doubly high.

It’s not completely clear why this is the case – and the researchers point out that the link is correlative, not causative. But they believe it has to do with the insect-boosting and habitat-shielding benefits that livestock farming can bring to the landscape, if managed well.

Livestock require grazing land, and if this doubles up as semi-natural pastures and meadow, it can provide nesting places for birds. (This type of habitat also happens to be among the most threatened in Finland, the researchers point out – so birds might be actively seeking it out.) As well as this, EU subsidy measures dictate that organic livestock farms must restrict antibiotic use, which could support a healthier environment where more insects thrive, and provide ample food for birds.

The general presence of animals and their dung likely also boost the insect populations on which birds rely: “Such farm management provides birds with several critical resources,” the researchers write.

They were able to show the outsized effect of organic livestock farms on wild birds by combining bird data gathered by citizen scientists across the Finnish agricultural landscape, with information on the type of land-use at each location. Then they looked at how the presence of various subsidy-driven measures – like natural buffers, and organic farming methods – correlated with the species present, their abundance, habitat, diet, and migratory status.

Further research would be required to pinpoint precisely what’s boosting bird abundance on livestock farms. But the researchers do suggest that sustainably rearing animals might be one underappreciated tool for restoring threatened ecosystems and supporting vulnerable species in the EU.

This kind of finding is especially important considering the billions spent on farming subsidies in the EU: “Funding should be allocated to measures that benefit biodiversity the most,” the researchers conclude. And in the short term, they suggest that in Finland at least, it wouldn’t hurt for meat-eating consumers to buy organic: after all, it’s for the birds.