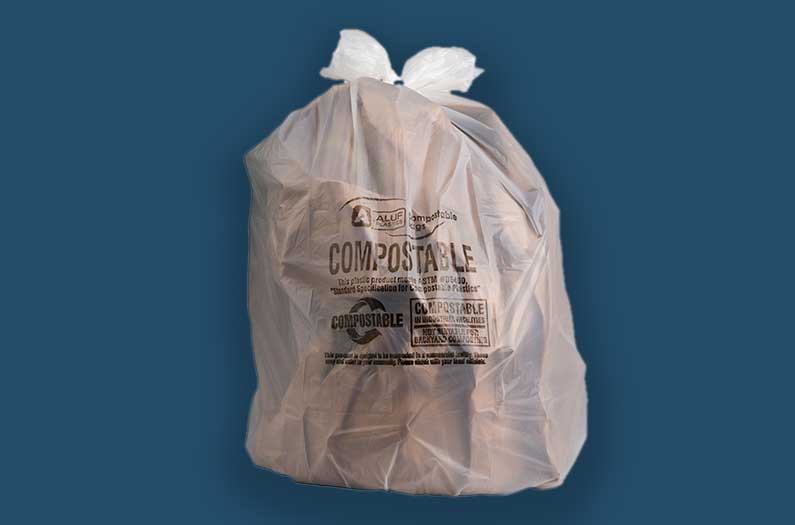 The breakdown of biodegradable plastic, broken down

Even after being buried in the soil or immersed in seawater for three years, plastic bags marketed as biodegradable can still carry a full load of groceries without breaking.
By Sarah DeWeerdt
May 7, 2019

Half of all plastics currently produced are used only once before being discarded. These single-use plastics make up a large proportion of litter both on land and in the ocean. The deaths of whales, turtles, and other marine life after ingesting plastic have been especially important in focusing public attention on plastic waste.

To address the problem, manufacturers have developed plastics that are designed to break down more easily in the environment. But a new study shows that even after being buried in the soil or immersed in seawater for three years, plastic bags marketed as biodegradable can still carry a full load of groceries without breaking.

To test how “eco-friendly” plastic bags fare in the real world, Imogen Napper and Richard Thompson of the International Marine Litter Research Unit at the University of Plymouth in the UK collected plastic carrier bags from various local retailers. 100 billion such bags are used in Europe each year.

The researchers sourced a conventional plastic bag, a compostable bag, a biodegradable bag, and two types of oxo-biodegradable bags. (The latter have oxidants added to the plastic to make it easier for microbes in the environment to break down.)

No single type of bag reliably breaks down in all environments over this time period, the researchers reported April 28 in the journal Environmental Science and Technology.

When left out in the open exposed to sunlight and air, all types of bags disintegrated into small pieces within nine months. But this isn’t actually great news: the resulting bits of plastic are more difficult to clean up than large pieces of litter, and may also have harmful effects on the environment.

All types of bags buried in soil were still there at the end of the experiment. (However, the compostable bag could no longer hold weight without tearing.) In addition to highlighting concerns about what happens when plastic bags become litter in the terrestrial environment, this suggests that biodegradable and compostable bags may not break down all that fast in landfills.

The “compostable” label generally means that a plastic will break down within a specified time in a commercial composting facility. But that assumes the plastic gets to such a facility. If not, all bets are off.

As for biodegradable and oxo-biodegradable plastics, there are no clear standards for how quickly products made from them must break down, under what conditions, and into what components.

But if consumers perceive a certain type of plastic bags as “eco-friendly” they may be more apt to discard or even litter them rather than reusing or recycling them, the researchers say.

The recycling bit is complicated too: the greater the diversity of plastics, the harder recycling becomes. And plastics designed to break down more easily can be especially difficult to recycle because they result in lower quality recycled plastics.

The study suggests that there’s no simple technological solution to the problem of single-use plastic. Instead, the solution is a human one that basically boils down to an ethic of care. That means, as individuals, choosing and reusing durable items rather than throwaway ones when possible, and taking care to discard items appropriately. And collectively, it means designing disposable products and waste management systems that help individuals follow through.