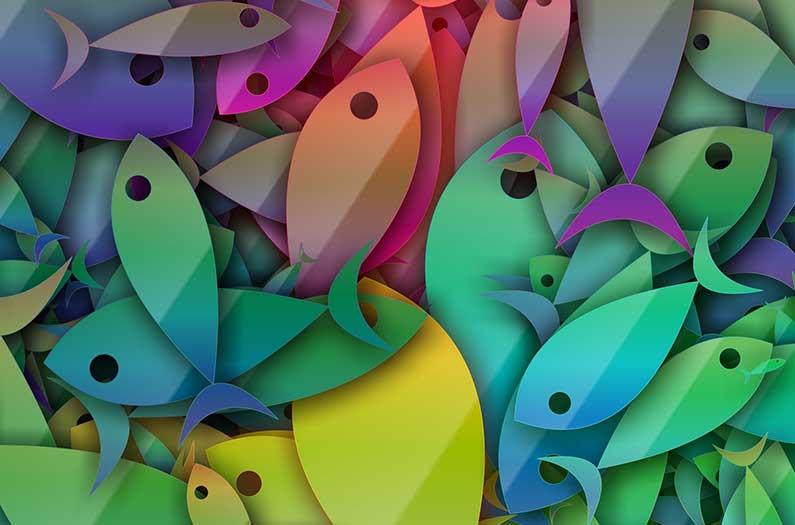 A new study reveals that ocean currents transport fish larvae all over the planet—making nations dependent on the health of spawning grounds in far-flung countries.
By Emma Bryce
June 28, 2019

A new study uses a novel computer model to show the enormous role that ocean currents play in transporting baby fish around the planet. It shows the extent to which individual nations actually depend on the health of the ocean in far-flung nations for their economies and food security.

Ninety percent of the world’s fish are caught within countries’ exclusive economic zones (EEZs), and so countries tend to manage fisheries along these national boundaries. Yet, not much is known about where these fish originate from. So the researchers on the new Science study developed a particle-tracking system to mimic the movement of fish larvae from over 700 commercially-fished species, based on knowledge about the location of their spawning grounds in different EEZs around the world. Then they simulated seasonal ocean currents to study the movement of these eggs between 249 global EEZs.

The simulation – the first to trace how far fish larvae travel globally—provided an unprecedented view on how fish get to where they’re eventually caught. This revealed that most countries depend on the provision of larvae from other parts of the world to prop up their fisheries—and this ‘donated’ fish benefits economies to the tune of several billion dollars annually.

Broken down by country, nations like Japan, China and Alaska produced the largest larval outflows from their waters. Indonesia, on the other hand, reaps the greatest financial rewards from this interconnected ocean, thanks to the rich spawning grounds of its many neighbors, whose larvae hitch a ride on ocean currents and are then conveniently deposited into Indonesia’s EEZ. In terms of quantity, Russia and South Korea receive the largest amount of fish carried on currents from other nations—amounting to more than one million tons in each case.

By plotting these links between countries, the researchers realized that global ocean currents create what’s known as a ‘small-world network’. This is a mathematical concept which describes a scenario wherein only a few nodes or hubs form the foundation of a vast system. For fisheries, that set-up is hugely risky, because it means that damage to an important spawning ground—a ‘hub’ that feeds into many regions—would result in dwindling catch in several countries. “In this context, habitat destruction, overfishing, or environmental change in a hub EEZ could have impacts that spread beyond its own boundaries,” the researchers write.

To determine this threat, they used the simulation to pinpoint ‘hotspots’ where economies, catch, employment, and food security could be at risk within this fragile interconnected system. Countries in the Caribbean, West Africa, Northern Europe, and Oceania were found to be most vulnerable: essentially, a large degree of their economic wellbeing and food security is dependent on the maintenance of spawning grounds that other nations have under their care.

While that’s an unsettling thought, it also highlights the positive potential of this global system. The spawning hubs that underpin the world’s fisheries could ensure—even enhance—economic success and food security in other parts of the world, if they’re well-protected.

That lends heft to the argument for larger marine protected areas, and more international collaboration to protect these now undoubtedly shared resources. “We are all dependent on the oceans. When fisheries are mismanaged or breeding grounds are not protected, it could affect food security half a world away,” the researchers say.