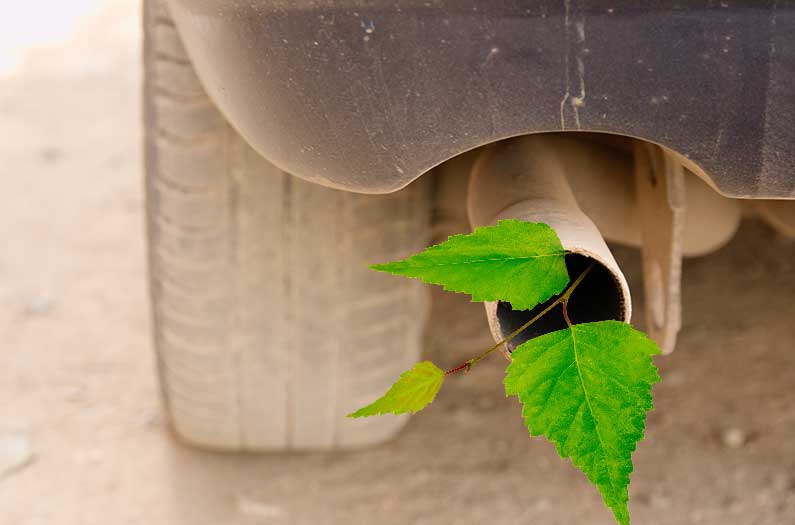 Planting trees next to busy roads could help reduce particle pollution in the air, but choose the tree species wisely: the leaves of some trees are better at trapping pollution than others, research shows.
By Prachi Patel
June 13, 2019

Planting trees along city roads is considered an effective way to counter the smoke that vehicles belch and the dust they kick up. Trees can trap the small particles in air that are health hazards. But the leaves of some tree species make them better air filters than others, researchers report in the journal Environmental Science & Technology.

Vehicles are the major source of particle pollution in urban areas. Barbara Maher and her colleagues at Lancaster University in the UK were looking at particles less than 100 nanometers in diameter, hundreds of times smaller than the width of human hair.

These ultrafine particles can last in the atmosphere anywhere from a few seconds to several days. They are inhalable and they can get into the bloodstream, lungs and even the brain. They are linked to asthma, lung cancer, and heart disease.

There is mixed evidence on whether trees really are effective at removing particulate matter. Leaves tend to capture particles but trees can also restrict airflow and keep pollution from dispersing. Most studies done so far have looked at how factors such as particle size, concentration, and wind speed. But the effectiveness of different tree species has been overlooked, Maher and her colleagues say.

Her lab has shown before that birch trees are good at grabbing particles larger than 1 micrometer. Now they wanted to find out how effective birch and other trees are at trapping nanoscale particles.

So they attached a diesel vehicle tailpipe to a small wind tunnel. In it, they placed branches from nine tree species: silver birch, yew, elder, maple, ash, cherry, beach, hawthorn, and nettle. After exposing the leaves to diesel exhaust for about half an hour, they measured the concentration of particles on the leaves.

Silver birch, yew, and elder performed best, capturing 79%, 71% and 70.5% of the ultrafine particles respectively. A leaf’s size, structure and its microscopic hairs all affect how much particulate matter it can nab.

The researchers still need to test these trees in a real-world environment. But they say that planting and maintaining–keeping them at or below head height and periodically washing if there is no rainfall–select species of trees could be a valuable tool for improving air quality and reducing exposure to particulates. This could be especially important for protecting the health of children at schools near major roads.