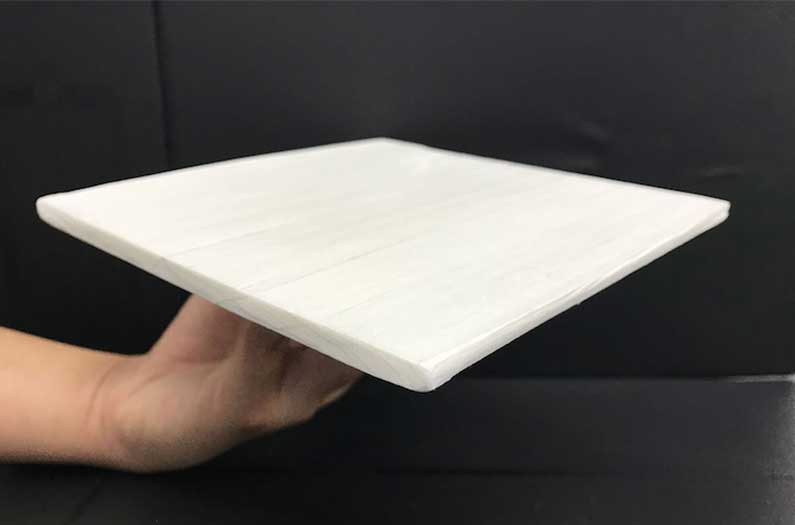 Engineered wood could cool down buildings without using energy

A novel modified wood that reflects sun rays and radiates heat into space could keep homes cooler and slash the energy use of air-conditioners.
By Prachi Patel
June 20, 2019

Air-conditioners in the U.S. are responsible for about 117 metric tons of carbon dioxide emissions every year. Homes and buildings would need less cooling if they could just radiate the sun’s heat away. And a new kind of engineered wood could help.

The wonder wood radiates heat into space. Placed on roofs and siding, it could save between 20 to 50 percent of energy used for cooling, a team of engineers reports in the journal Science. The wood is also exceptionally strong, which could make it a great construction material. It is eight times stronger than natural wood and stronger also than some kinds of steel.

Wood is composed of three main parts: the carbohydrates cellulose and hemicellulose, and the polymer lignin that holds those molecules together and makes wood rigid. Lignin conducts heat. So researchers at the University of Maryland and the University of Colorado, Boulder found a simple way to extract lignin from wood. They soak it in a bath of hydrogen peroxide and other chemicals, which breaks up the lignin so it can be washed away. The result is a porous, white foam-like material that is an excellent insulator, as the team reported last year.

The researchers used an industrial hot press to squeeze the white wood, making it denser and stronger. The material reflects the sun’s rays. It also absorbs heat from surrounding air and re-emits it at longer infrared wavelengths that the air around it cannot absorb. Instead these waves can travel through the atmosphere straight into space.

At an outdoor test site in Arizona, the wood cooled the surface of a box by almost 10°C at night and over 4°C during the hottest part of the day. The researchers also built a model of a typical apartment building and calculated how the building’s energy use would fare in 16 different cities if it were covered with the cooling wood. The cities covered all different U.S. climate zones.

The modified buildings would spend 20–60 percent less energy for cooling, the team found. What’s more, this cooling effect is the most pronounced in hot and dry climates, making the technology best for use in places such as the U.S. Southwest where people rely heavily on air-conditioning. It could also provide comfort for people in developing countries where air-conditioning is not common.