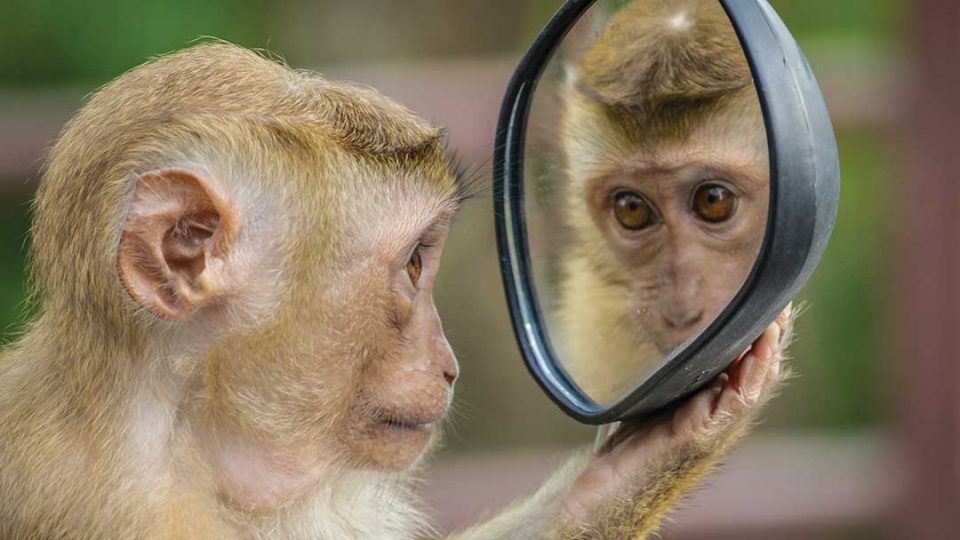 The traits proposed to define us—tool use, language, empathy, and so on—assume that humanity’s essence resides in what sets us apart from other beings. Yet, a seismic readjustment to that canon is well under way.

In early February 2019, researchers from the Max Planck Institute and Osaka University reported that bluestreak cleaner wrasses—finger-length tropical fish renowned for their endearing practice of nibbling dead skin from the mouths of larger, scary-looking fish—appeared to recognize themselves in a mirror. (1)

Humans usually do this early in childhood. It’s considered a key developmental milestone, signifying a heightened sense of oneself as oneself, separate from others and from one’s environment. In fact, this sense of self-awareness is a condition so integral to human experience that it’s head-swimmingly difficult to imagine its absence. Yet only a handful of nonhuman species, including several great apes, Asian elephants, bottlenose dolphins, magpies, and manta rays have passed the so-called mirror test; so the cleaner wrasses’ success was met with surprise—and some skepticism.

Fish, after all, are not typically recognized as intelligent. Conventional scientific wisdom holds that self-awareness involves a cognitive sophistication beyond the tiny-brained wrasses’ ken. Yet they met the test’s requirements. The wrasses swam upside-down in front of the mirror, a behavior not performed elsewhere, and they tried to remove marks the researchers had made beneath their throats, about which they could have learned only by using the mirror to inspect themselves. Nevertheless, the researchers disavowed the implications. Granting wrasses self-awareness, they noted, “would require a seismic readjustment of our cognitive scala naturae”—the Latin term for “ladder of being,” a conception of the animal kingdom as a hierarchy with Homo sapiens (“wise man”) perched on top.

A tenet of canonical Greek philosophy, the notion of scala naturae eventually dovetailed with Christian ideas of mankind (not animals) fashioned in God’s image, and later with colonial efforts to erase indigenous cultures that regarded animals as possessing intelligences comparable to our own. Such were the foundations of Enlightenment science. A few scientists, most prominently Charles Darwin, pushed back; but on this subject, they were pushed aside.

By the mid-twentieth century, scientific dogma treated animals as mindless stimulus-response machines. If people outside science were not always so reductionist, those views still shaped culture and species-level self-understanding. Consider the question “What makes us human?” It is typically answered in terms of differences. The myriad traits proposed to define us—tool use, language, empathy, and on and on—assume that humanity’s essence resides in what sets us apart from other beings.

Yet with all due respect to the researchers whose wrasses so confoundingly used mirrors to inspect themselves—and, for the record, many scientists now view the mirror test as measuring just one variety of a primal, widespread capacity for self-awareness—that seismic readjustment in the “ladder of being” is already well under way. (2)

Scientific journals abound with studies of rich animal minds. Honeybees can be trained to do basic addition and subtraction; bird nests, the construction of which was long dismissed as purely instinctive, display a sophisticated sense of the structural properties of different twigs and sticks. (3, 4) Neurological imaging of lab rats shows them mentally replaying paths through mazes and imagining alternative routes, a capacity known as mental time travel. (5) Many animals, of course, appear to plan for the future—witness a chickadee caching seeds before winter—but the rat studies’ methodological thoroughness made it clear: they are not trapped, as has often been said of animals, in an eternal present. Like humans, they also live in the past and in the future.

Another capacity invoked as uniquely human is that of language. Indeed, there’s no evidence of other species possessing our proficiency in coining words and arranging them in nested, recursive forms, such as this very sentence. Yet as with self-awareness, the emphasis on human language as exceptional has obscured the richness of animal communication.

Japanese great tits, a relative of the aforementioned chickadees, are among the species whose vocalizations are syntactical—that is, order determines meaning—and referential, signifying some external object rather than internal states of arousal. (6) Change the order of calls used to summon companions in response to an approaching predator, and they no longer elicit the same response. It might not be “language,” but it’s certainly language-like, and much can be accomplished with just a few signals and pragmatic inference. And a great deal of meaning requires nothing language-like at all: consider the importance of a grimace or a smile or a hug.

Communication is foundational to community, and social life is an especially powerful evolutionary driver of intelligence. Crows recognize the faces of people who bothered them years before, and they also inform one another about them. This should not come as a surprise. Group life requires remembering identities, assessing abilities and intentions, and making judgments based on past experience. (7)

And then there’s the tangled topic of emotions—the positive or negative valences that shape all behavior but manifest so richly in relation to others. Many researchers still regard animal emotions as baser than our own. Yet that assumption, too, has been shaken. Researchers use rats to study the neurobiological foundations of empathy—the ability to feel another’s feelings—and veterinary scientists recognize the suffering caused by separating dairy calves from their mothers. When an orca mother off the coast of Washington carried her dead baby’s body for weeks, as dolphins are known to do, many observers considered the most likely explanation to be grief. (8)

Animal communities are not just social and emotional. They’re also political. Many animals live in groups that make decisions collectively, even democratically. (9) African wild dogs, for example, appear to indicate their “vote” by sneezing, with packs moving only after a quorum of members—three if movement is initiated by a dominant pack member, ten if a lower-ranking dog takes the initiative—has agreed. (10) Some questions remain about whether the sneezes are actually votes. Or do they simply happen to correlate with preferences expressed in some other, as-yet-unnoticed way, such as body postures? Nevertheless, it is evident that packs have mechanisms of participatory group decision-making.

Their relations might not be governed by human-style morality, another ostensibly defining human trait, with its abstractions and codifications—yet our morality may be grounded in biologically widespread predispositions. To watch two dogs playing is to observe a choreography of fairness and sharing. (11) Some creatures, such as the humpback whales who defend seals from orca attacks, may well be motivated by explicit morality. (12)

All this research suggests that human intelligence is not a pinnacle of evolution but embodies one point in a radiation. Some scientists do worry that over-eagerness for commonalities will obscure experiences outside our own (what does it feel like to be a cuttlefish whose language ripples across his skin?), but the overall effect is a much-needed correction.

Does this mean that humans are not at all unique? It does not. Our technologically mediated hyperconnectivity and our collectively conceived fictions are certainly exceptional. (13) Yet it’s hard to entertain such claims without interrogating the underlying impulse to set ourselves apart, to set ourselves above. It’s this very sense of Homo sapiens as being intrinsically more worthy than other animals, whose lives and interests can’t possibly be so important as our own, that’s pushed Earth to the brink of another mass extinction. (14) The very premise of human uniqueness begins to feel like a self-serving fetish. What if that which “makes us human” were instead conceived as what’s important to us—such as affection, or health, or the ability to make choices? We might recognize that, rather than separating us, “humanity” is something we share with many other creatures—and
consider what it means to live that way.

1. Kohda M et al. If a fish can pass the mark test, what are the implications for consciousness and self-awareness testing in animals? PLoS Biology, 2019.

2. Barron AB and Klein C. What insects can tell us about the origins of consciousness. Proceedings of the National Academies of Science, 2016.

4. Biddle LE, Deeming DC, and Goodman AM. Birds use structural properties when selecting materials for different parts of their nests. Journal of Ornithology, 2018.

13. Suddendorf T. The Gap: The Science of What Separates Us from Other Animals. Basic Books, 2013.

Brandon Keim is a freelance journalist specializing in animals, nature, and science. He is the author of The Eye of the Sandpiper: Stories from the Living World.