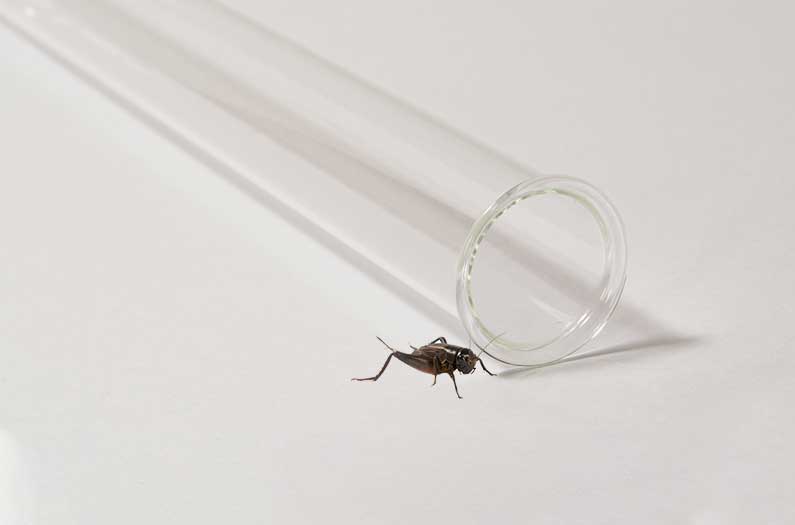 The case for lab-grown insect meat

Could our future protein needs be satisfied by insects—grown in a petri dish?
By Emma Bryce
June 14, 2019

Farming edible insects is old news: the next step towards a greener future is to artificially grow insect meat in the lab, according to a new study.

Insects – a rich and efficiently-produced source of protein – have been rising in favor as a potential future replacement for the consumption of conventional meats like beef and pork. Alongside this, we’ve also made advances in producing meat in laboratories from cultured animal cells—known as ‘labriculture’ – as a substitute for resource-intensive livestock farming. Shifting meat production from the field to the petri dish could be the answer, many believe, to cutting back on the huge amounts of methane produced by cattle, especially, as well as reducing land- and water-use, and preventing swathes of deforestation.

But the team of Tufts University researchers on the new study think we can go even further by combining these two futuristic ideals: growing insect protein in the lab, they posit, would be more productive and require fewer resources than those needed to cultivate beef in a petri dish – further shrinking the footprint of our food.

To be clear, culturing insect cells for consumption isn’t a reality, yet. But the study explores the technological advances so far, and the options available to us. We already cultivate insect cells for use in scientific research. For instance, insect muscle cells are grown for use in soft robotics. Now it’s a matter of leveraging that capability to help us produce more food, the study suggests.

The environmental case is convincing. Compared to the cells of other animals like cows, insect cells are notably more resilient. They can remain functional at variable temperatures, pH and oxygen levels. They can also grow at room temperature, which would save on the huge energy costs required to cultivate mammalian cells in the lab. And they require less glucose to thrive.

“Insect cells have unique properties and we’ve observed them to grow quicker, with less maintenance, with lower resource requirements and at a wider range of environmental conditions, compared to mammalian cells,” says Natalie Rubio, a PhD student in cellular agriculture at Tufts University. “These benefits could translate into more cost-effective and more scalable cultured meat production. We’d still be making burgers out of muscle and fat; the origin species is just a little less familiar to people.”

Another major advantage is that the insect labriculture wouldn’t rely on the costly serum that’s essential for the growth of other types of animal cells in the lab. Serum is a source of nutrients, hormones, and minerals that enables cell cultures to grow – but it’s also expensive, resource-intensive, and often derived from the blood of livestock, which brings in concerns around environmental impact and animal welfare. Insect cells are adaptable enough to grow without this medium, and so save on these resources.

And, nutrition wouldn’t be the trade-off for this greater efficiency: “Edible insects are often lauded for having equal or superior nutrient profiles relative to conventional meat or poultry products, as they are a dense source of protein, monounsaturated and polyunsaturated fats, fiber, and minerals,” the researchers write in their paper. That said, further research would be needed to determine the precise nutritional profiles of insect cells grown under laboratory conditions. (One other benefit of labriculture in this regard, is that in the controlled conditions of the lab, it may be possible to fine-tune nutritional content to enrich cells.)

Despite the clear potential, there are still many challenges to overcome. We need to develop an efficient way to control the proliferation and differentiation of cells into muscle and fat—the latter being crucial also for providing nutrients and flavor. We’ll also need to develop 3D scaffolds on which the cells can grow, to try and mimic the meat-like texture of a burger, for instance. The most likely possibility for that is chitosan, an ingredient found in mushrooms and insect exoskeletons, which could convey a spongy texture to meat if used as a foundation, the researchers suggest.

But of course, the biggest challenge—and the elephant in the room—is the suspicion that most consumers feel (at least in western countries), about eating insects. Considering that we’ve not quite jumped this first hurdle, it seems unlikely right now to think consumers could be convinced, further, into eating insect cells artificially grown, and then shaped into something that mimics meat. Even for the most adventurous eaters, that will likely require a paradigm shift.

There is, however, some cause for optimism that insect labriculture will eventually catch on: the tools are there to develop it, and so is the need. Estimates show that 14.5% of greenhouse gas emissions now arise from livestock farming, and we’re increasingly going to need culinary solutions that cut back on that threat.

Plus, growing this protein in a lab does overcome one major obstacle people face in contemplating whether to eat insects: it gets rid of all those itsy-bitsy, shudder-inducing legs. “I think if we can make healthy, sustainable and tasty meat that looks like products people are familiar with, society will eventually get on board,” Rubio believes.