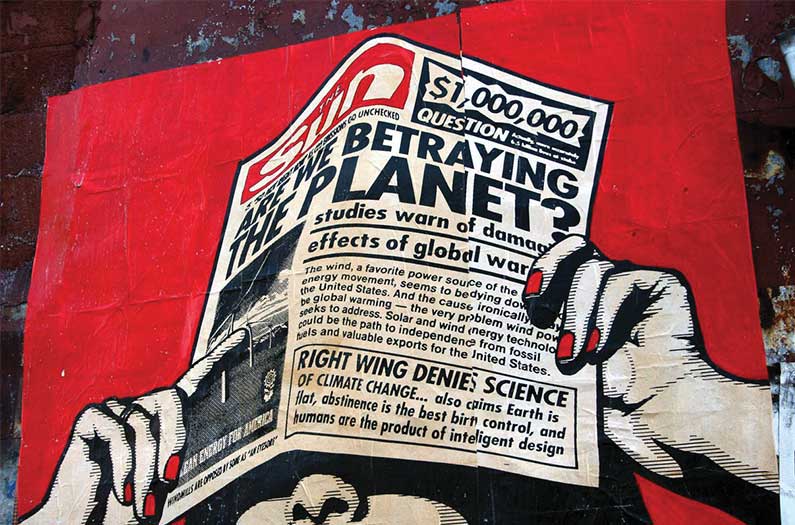 In the fall of 2011, my wife and I decided to sell our 900- square-foot Berkeley bungalow and look for more spacious digs. One year and ten failed offers later, we moved into a sprawling, redwood-paneled, mid-century modern in the Berkeley hills. The place needed work. But it was perched on a hillside amidst California oaks, its floor-to-ceiling windows boasting commanding views of San Francisco and the Golden Gate Bridge.

We hadn’t set out to live in a fire zone. But after living cheek by jowl with our neighbors in the Berkeley flats for 17 years, we found the views and the benefits of living a little closer to nature and a little farther from everyone else hard to resist. In this, we were not alone. Millions of Californians over the past five decades have moved up hillsides and into forested areas. And, like many of our fellow residents, we’ve begun to harbor second thoughts after two seasons of catastrophic wildfires.

Were a firestorm like the recent ones that swept through Paradise, Santa Rosa, and Redding to sweep through our neighborhood, our home, seemingly floating in the canopy of an oak forest, would be indefensible and our escape, down narrow and twisting roads to the concreted safety of the flatlands by San Francisco Bay, far from certain.

The dominant tenor of environmental communication has been apocalyptic. And yet, the sorts of threats that people have generally responded to have been closer to home.

The situation seems bound to get worse. The degree to which the recent spate of intense wildfires can be attributed to global warming is disputed—and in some sense irresolvable. Disentangling decades of fire suppression and unplanned growth from the effects of a hotter and drier climate is well-nigh impossible. But what seems clear is that both these drivers of worsening wildfires are likely to continue. Global temperatures continue to rise. And Californians show no more sign of abandoning our suburban and exurban redoubts for fear of wildfires than we have shown willingness to abandon our fault-riddled cities for fear of earthquakes.

The same is true for the two of us. My wife has declared that if we get burned out, she doesn’t think she’ll want to return. But neither of us feels much urgency to leave preemptively. And we have greater resources and flexibility than most. For those struggling economically—tied to 9-to-5 jobs, dependent on caretakers, or caretakers themselves—the choices are harder still.

Oddly, the thing that we both acknowledge might prompt us to take action now is not the dreaded fear of fire apocalypse but more prosaic concerns about quality of life. For the third time in little more than a year, we spent a week or more sheltering indoors from the Beijing levels of air pollution that had drifted into the Bay Area from fires to our north. The prospect that fires of this sort might produce frequent air-quality crises almost year-round, more than the fear of losing our home or our lives to raging wildfire in the Berkeley hills, is what has given us pause.

While it might not seem entirely rational, our reaction and priorities are a much better reflection of how and why human societies have tended to deal with environmental challenges. For decades, prophets of environmental doom have been haranguing the public with threats of ecological apocalypse, to little effect. Yet during the same time, we’ve managed to pass laws that have dramatically reduced air and water pollution, protected coastlines and wetlands, and brought endangered species back from the brink. The dominant tenor of environmental communication during this period has been apocalyptic. And yet, the sorts of threats that people have generally responded to have been closer to home, and the actions to address them have brought near-term benefits.

Two recent government reports, the United Nations IPCC Special Report on Global Warming of 1.5C and the United States National Climate Assessment, have stoked fears of economic, even societal, collapse. News reports have predictably emphasized the most sensational and unlikely scenarios while activists claim that without rapid and sweeping transformations of the global economy, social collapse and ecological genocide are virtually assured.

And yet it is worth considering whether we might be better served by focusing on the more prosaic impacts that climate change will almost certainly bring: a hotter and drier climate, worsening air quality, and more intense natural disasters that we may become increasingly adept at weathering but that will almost certainly create ample misery and discomfort.

Thinking about apocalypse, like thinking about one’s own death, is not something that most of us have much enthusiasm for. And so we don’t. We will all die sooner or later. In the meantime, there is a life to live, obligations to fulfill, friends and family to love, a future to plan. And so we get on with our lives, even with the knowledge that it will all, ultimately, come to an end.

To describe the impacts of climate change as a nuisance is the sort of thing that to many environmental ears sounds dismissive. But a nuisance is something that, while it can be tolerated, we can also do something about. California policy makers, for instance, are now seriously considering whether it might be wise to pay to underground power lines in fire-prone areas, given that they have been the proximate cause of most of the state’s recent wildfires. A focus on this sort of adaptation might also motivate the state to invest in modernizing its crumbling water and transportation systems for a hotter and more variable climate.

That won’t stop global warming. But it is also the case that the benefits of cutting emissions today will not begin to have an impact on the climate for many decades. Meanwhile, the fires, the floods, and the water shortages will continue to worsen at the interface of a climate that is becoming more extreme and an economy and population that appear likely to continue expanding, even under the most extreme climate scenarios.

Investing in measures to better adapt to climate change means investing in the future, in the belief that humans can continue to thrive, even on a hotter planet.

Doing something tangible today to address the impacts of climate change might even steel us to take more far-reaching action to reduce emissions over the long term. Investing in measures to better adapt to climate change means investing in the future, in the belief that humans can continue to thrive, even on a hotter planet.

Some suggest that doing so is a kind of folly, that focusing on short-term adaptation will inevitably be overwhelmed by increasingly extreme climate impacts and, worse, might undermine our determination to radically reduce emissions.

But there is little evidence that this is actually so. To date, despite decades of increasingly dire warnings about the consequences of continued carbon dioxide emissions, we have failed to take significant action to either adapt to a changing climate or to meaningfully cut our emissions.

Demands that people see the apocalyptic writing on the wall and undertake radical changes to their lifestyles or economy are likely to continue to fall on deaf ears.

On ours, most especially. I have spent much of my career working on the fight against climate change.

I understand better than most the risks that we personally face given a changing climate as well as the unquantifiable risk that human societies must confront over the longer term. Yet, at least for now, my wife and I are staying put. Waking up early to the San Francisco skyline crisp and pink from the glow of the low winter sun, or coming home in the evening to the sound of a pair of great horned owls softly hooting from the redwood tree at the corner of our lot, is not the sort of thing that I’ll easily give up. It is literally and figuratively a privilege.

Most of us, even those living in far more difficult circumstances than we do, deeply love much about our lives, our communities, and the places where we live. For these reasons, it is worth considering whether foregrounding efforts to adapt to climate change—undergrounding power lines, developing drought-resistant crops, planning for rising sea levels and more frequent floods—might usefully shift the focus of climate discussions toward all that we have at stake in the here and now, and not toward a remote and abstracted future that is difficult to summon and unpleasant to think about. 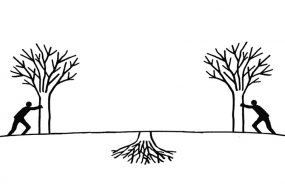 In the past, forest restoration could be informed by what once was. Now we have to make hard decisions about what we’re working toward. 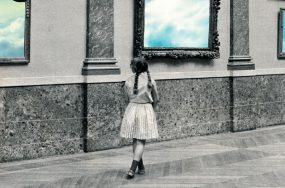