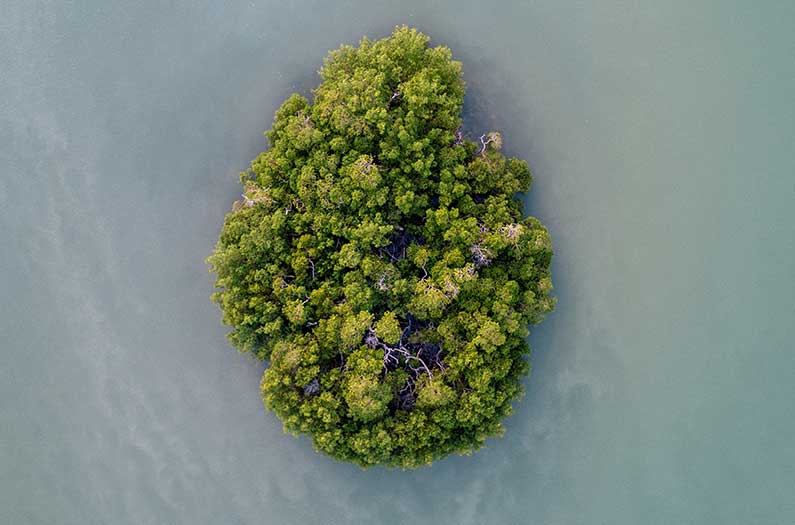 Does an island lifestyle confer climate tolerance—if you’re a plant?

Many island plant species exhibit broader climate tolerance than their current native ranges suggest; however, this expanded tolerance is still not enough to buffer many of them against projected future climate change.
By Sarah DeWeerdt
July 16, 2019

“These species have been stuck in place on their native islands for millions of years, during which they must have survived past shifts in climate,” says Kyle Rosenblad, a research associate in conservation biologist Dov Sax’s lab at Brown University. That history means island species could be able to tolerate a broader range of conditions than they currently experience.

The truth, Rosenblad, Sax, and graduate student Daniel Perret reported yesterday in Nature Climate Change, lies somewhere in between those optimistic and pessimistic takes. Many island plant species “do indeed exhibit broader climate tolerance than their current native ranges suggest,” Rosenblad says; “however, this expanded tolerance is still not enough to buffer many of them against projected future climate change.”

If high carbon emissions continue, nearly a quarter of species in the analysis will be on the road to extinction 50 years from now, unless we intervene to help these populations persist.

The researchers took advantage of humans’ penchant for moving plants around and planting exotic species in our gardens. They combed through existing databases and herbarium records to assemble information on 55 species of conifers native to 14 islands and archipelagos worldwide. They noted each species’ native range, as well as places outside that range where species have been planted and done well, or even established self-sustaining populations.

They used this information to develop a model of what climate conditions each species can thrive under, or at least tolerate. Then, they used computer climate models to map where such conditions will exist in 2070 under different emissions scenarios.

Some species, especially those native to large islands, will still have climatically suitable habitat somewhere in their native range. Others will be able to survive on their native island but will be unable to maintain a self-sustaining population; they’ll slowly dwindle towards extinction without human help. A third category of species will face conditions entirely outside their tolerance, and will need lots of coddling to maintain any presence at all on their native island.

Just how many species fall into each category depends on the severity of climate change. In the most severe scenarios, 20% of the conifer species studied could be unable to survive on their native islands and 23.6% could be unable to maintain self-sustaining populations without help. More studies will be necessary to determine how well these patterns apply to other groups of plants.

Meanwhile, ongoing climate shifts mean that exotic species currently nurtured in gardens are likely to establish self-sustaining populations in new areas outside their native range in the future. That’s true for plants in general, not just those native to islands. “We will not be able to stop this process even if we wanted to, so it makes sense to think now about how we will respond to it,” Rosenblad says.

Scientists have been talking about the possibility of moving plants and other species to new areas where future climate conditions are likely to be hospitable, a strategy known as translocation. Could horticulture be providing a kind of head start on this process?

The potential for escaped plant species to become invasive weeds is always a concern, says Rosenblad. But still, he says: “When these non-native escape events occur for species that are struggling under climate change in their native ranges, it may make sense to regard such events as no-cost conservation tools.”