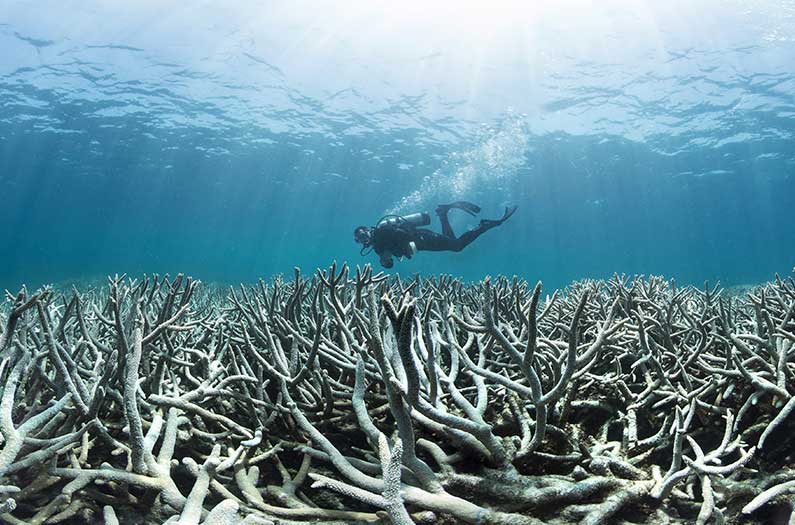 What’s the connection between climate grief and climate action?

Iconic places like the Great Barrier Reef can give people a reason to care about climate change. What’s more, these effects can occur even among people who don’t have intimate connections to a place.
By Sarah DeWeerdt
July 2, 2019

What makes people support action on climate change? For starters, of course, they need to accept the scientific consensus that climate change is real, human-caused, and serious. But studies have shown that’s not enough. They also need an emotional pull – a reason to care.

Iconic places can give people that reason to care, according to a study analyzing people’s views and attitudes about Australia’s Great Barrier Reef. What’s more, these effects can occur even among people who don’t have intimate connections to a place.

The Great Barrier Reef is a quintessential example of an iconic ecosystem. The UNESCO World Heritage site contains about 10% of the world’s coral reef habitat, is a source of national pride for many Australians, and is a major tourist draw for snorkeling, scuba diving, and wildlife watching.

And, like many iconic ecosystems, the Great Barrier Reef is threatened by climate change. A marine heat wave in 2016 triggered massive coral bleaching that wiped out about 30% of shallow water corals; a second wave of bleaching the next year killed off 20% more. If high carbon emissions continue, the ecosystem is predicted to experience severe bleaching every year by the mid-2040s.

Researchers interviewed 4,681 tourists in the Great Barrier Reef region before and after the recent wave of climate damage: 2,877 in 2013 and 1,804 in 2017. About half of the survey participants were from Australia and half were from overseas, mainly the United Kingdom, Germany, France, and the United States.

Asked to share the first words that came to mind when thinking about the Great Barrier Reef, the 2017 tourists used more negative words such as “fragile,” “pollution,” and “damage,” than the 2013 tourists had. But they also used just as many neutral and positive words, such as “wild,” “diversity,” and “pristine.”

Basically, the 2017 tourists were expressing ecological grief, the researchers argue in their paper published in the journal Nature Climate Change. “As non-local actors, tourists would not normally be considered to have strong lifestyle dependence on the destinations and attractions they visit; however, their place attachment for an icon such as the Great Barrier Reef can still be strong and they are vulnerable to experiencing grief in response to the icon’s loss or damage,” they write.

What’s more, the patterns were the same regardless of whether the tourists had actually visited the reef itself at the time they completed the survey, suggesting that climate grief doesn’t necessarily depend on direct personal experience of a place.

The 2017 tourists expressed greater value of and protectiveness toward the Great Barrier Reef than the 2013 tourists. The researchers see this as evidence of ecological empathy – the flip side of ecological grief.

The bad news is that the climate damage to the Great Barrier Reef made people feel powerless to help. The 2017 tourists expressed less optimism and were less likely to believe that their actions could help protect the reef, compared to those who visited in 2013.

The results suggest that climate advocates need find ways to help people harness their protective sentiments without letting them give in to hopelessness.

Finally, 73% of the tourists surveyed in 2017 agreed with the proposition that “climate change is an immediate threat requiring action,” compared to 56% of those surveyed in 2013.

The study wasn’t designed to suss out cause and effect relationships, so it’s not entirely clear whether the Great Barrier Reef’s peril was what shifted people’s climate beliefs. Still, the finding provides a further hint of the power and reach of climate icons.