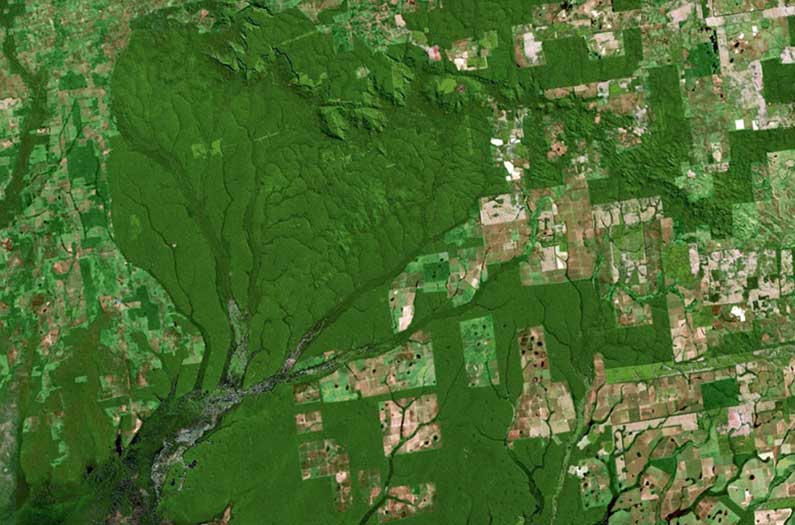 How to keep the Amazon from burning

How people use land may have far more influence on whether the Amazon burns than does climate change.
By Brandon Keim
August 14, 2019

First the bad news: there’s a good chance that, as the planet continues to warm, Amazon rain forests will become dramatically more fire-prone. The vast jungles known as Earth’s lungs will deteriorate.

Now the good: new research suggests that how people use land has far more influence on whether the Amazon burns than does climate. An undegraded Amazon may even offset fire risks posed by climate change. Keeping Earth’s lungs breathing is eminently within people’s grasp.

Environmentally sound land use “would substantially mitigate the effect of climate change on fire probability,” write researchers in the journal Global Change Biology, “even under the most pessimistic” greenhouse gas scenarios.

Previous studies have found that both climate change and land use—such as logging, converting forests into farms and ranches, and road-building—increase the likelihood of fire in the Amazon, where 400 billion trees produce an estimated 20 percent of Earth’s oxygen and clouds form that deliver rain across South America. Predictions differ, though, and how land use and climate change will interact is not well understood.

When climate alone is considered, Fonseca’s team estimates that if greenhouse gas emissions peak around 2040 and decline steadily afterwards—not exactly a best-case scenario, but a pragmatically good one—the likelihood of any given forest patch catching fire will increase across much of the Amazon by this century’s end, but only slightly. The amount of forest at high risk of fire will increase by 7 percent.

If emissions continue unabated, though, about one-fifth of the Amazon will experience a significant uptick in fire risk. The high-risk area will increase in size by 28 percent.

When land use alone is considered, what the researchers call a “sustainability” scenario—no more degradation of old-growth forests, an end to illegal deforestation by 2025, no major road-building projects, respect for protected areas, and enforcement of environmental laws—sees an 11 percent increase in high-probability fire areas. If deforestation and development continue, though, the high-risk area increases by a whopping 73 percent.

“The projected effects of land‐use change only on fire activity in the Brazilian Amazon surpass the ones due to climate change, both in extent and in intensity,” write Fonseca and colleagues.

Of course land use and climate change will occur together—and when the researchers combined them in their models, the results were dramatic. If people curb carbon emissions and use the land sustainably, high-risk fire areas grow by 21 percent by the year 2100. With uncontrolled emissions and unsustainable land use, that number rises to a whopping 114 percent.

Even under a good climate scenario, unsustainable land use in the Amazon “would cause a decisive increase on fire probability in the region during the 21st century,” write Fonseca’s team, “with consequent negative impacts on biodiversity, regional climate, human health, forest structure, biomass, and carbon emissions.”

That regional land use is easier to control than global carbon emissions is reason for optimism. Unfortunately, Brazil is now headed in the wrong direction. Though deforestation slowed during this century, that rend has recently reversed under the leadership of far-right president Jair Bolsonaro.