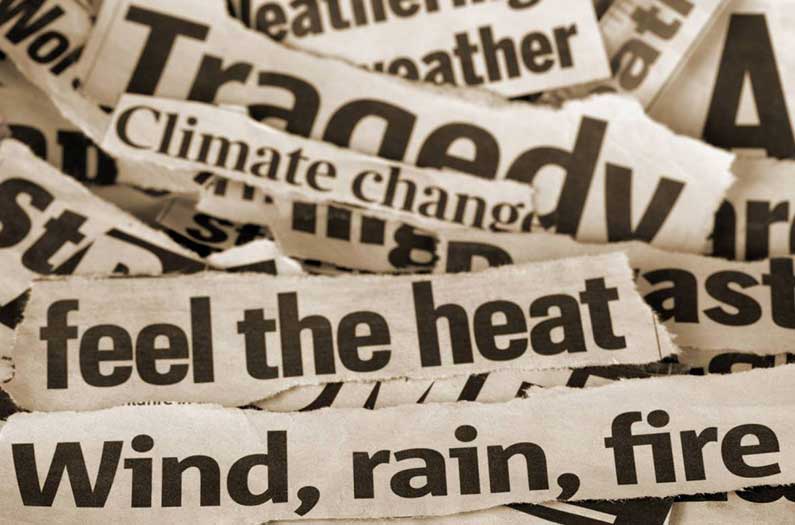 The themes and narratives that frame media coverage of climate change differ from one country to the next and are shaped by the economy and other characteristics of a country.
By Sarah DeWeerdt
August 13, 2019

In the Internet age, the media seems increasingly global. Yet climate change coverage remains, in many ways, resolutely local. The themes and narratives that frame media coverage of climate change differ from one country to the next and are shaped by the economy and other characteristics of a country, a new study reveals.

Researchers in the United States and Vietnam analyzed coverage of climate change by 84 media outlets in 45 countries and territories around the world. The countries spanned different climate conditions, political contexts, levels of economic development, and energy consumption patterns.

A few previously published studies have compared and contrasted climate coverage in pairs of countries. But usually developing countries have been left out of such analyses. The new study is much larger and more inclusive.

They analyzed the articles both using a computer algorithm and by scanning the texts themselves, looking for key words and catchphrases indicating one of seven narrative ‘frames.’

The framing of media coverage determines which aspects of a story are emphasized and which are left out. Frames affect how readers interpret the story and how they understand a problem – and therefore what solutions they support.

The most common frame across all countries is international relations, the researchers report in the journal Global Environmental Change. This frame emphasizes international work to reduce greenhouse gas emissions and mitigate climate change, such as the Paris Agreement.

Stories about the economic impact of both climate change and mitigation are also common. The popularity of different frames varied little over the years covered in the study.

However, the use of different frames does vary from place to place, apparently influenced by local characteristics. The researchers analyzed how each country’s vulnerability to natural disasters, intensity of carbon emissions, level of economic development, government effectiveness, and degree of press freedom affects climate coverage by its media.

No past study has looked at what factors drive media framing of climate change in this way, the researchers say.

They found that the strongest predictor of how climate stories are covered is gross domestic product (GDP) per capita – typically interpreted as an indicator of a country’s wealth.

In richer countries, climate stories tend to focus (like the story you’re reading now does) on science – new discoveries, controversies, and uncertainty – or domestic politics and regulations.

Climate change coverage in low-resource countries, in contrast, is more likely to center on international relations or the natural impacts of climate change such as melting glaciers and weather-related disasters.

In addition, media in countries where carbon emissions are high are more likely to publish stories about energy sources and use. And media in countries that are more vulnerable to natural disasters (including the Philippines, India, and the Gambia) often cover the natural impacts of climate change.

The least popular frame across the board? Social progress – that is, stories emphasizing the potential for solving problems and improving living standards while living in greater harmony with nature. So it’s hard not to wonder if the lack of such framing contributes to the public perception that climate change mitigation is too difficult and expensive to undertake – and thus makes the problem more intractable.