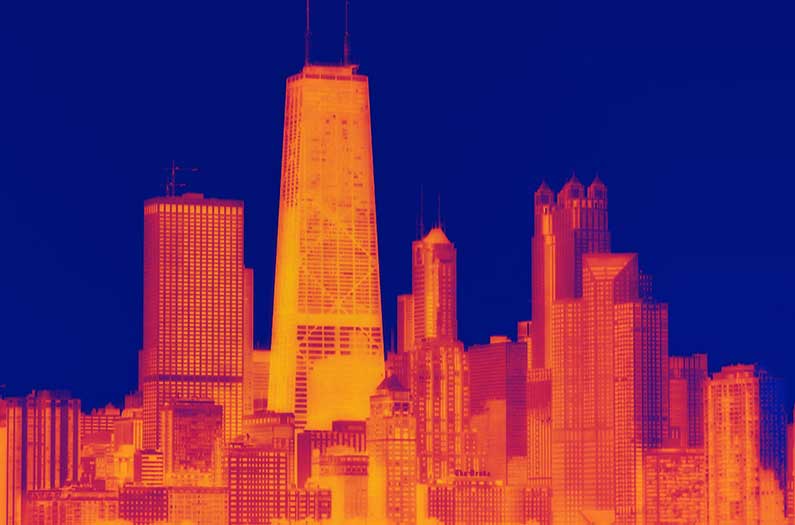 Device cools buildings without electricity by sending heat into space

A new electricity-free cooling system that relies on inexpensive, easy-to-manufacture materials could help cool buildings in an urban setting.
By Prachi Patel
August 29, 2019

July 2019 was the hottest month ever recorded, according to the National Oceanic and Atmospheric Administration. Such heat waves are only going to become worse and more frequent with a changing climate. As the world gets warmer, demand for cooling is surging, bringing with it more greenhouse gas emissions.

A new system that can cool buildings without using electricity might help. The cooling system, reported in Nature Sustainability, absorbs heat from air and sends it through the Earth’s atmosphere into outerspace. Unlike past systems that work on that same radiative cooling concept, it uses low-cost materials that could be easily made on a large commercial scale.

The International Energy Agency estimates that cooling consumes about 10 percent of electricity consumed worldwide. As living standards increase in many developing nations, energy demand for air-conditioning is expected to triple by 2050.

To curb cooling-related emissions, a few research groups have been exploring radiative cooling technologies that do not require electricity. The concept relies on the fact that all objects on Earth absorb energy from the sun and radiate that heat into the atmosphere when the sky is cooler.

Radiative cooling systems made so far have used high-tech materials with multiple layers or special optical structures that radiate heat at a wavelength that passes through the Earth’s atmosphere into space. A California-based startup called SkyCool is commercializing such technology developed at Stanford University.

Researchers at the University of Buffalo have built a radiative cooling system with an inexpensive aluminum film coated with a clear rubbery polymer. The aluminum reflects sunlight while the polymer absorbs heat from surrounding air and transmits it into space. The materials are inexpensive and the film should be easy to make using a fast, solution-based processing methods that would make the entire device cost-effective.

Thermal radiation normally spreads out in all directions. But the Buffalo team came up with a way to beam the emissions in one direction. They place the film at the bottom of an open foam box with tapered sides that are painted with a special material, which soaks up sunlight and efficiently directs the heat emitted by the polymer film upwards into the sky.

“This enables the system to be more effective in urban environments, where there are tall buildings on all sides,” says Qiaoqiang Gan, a professor of electrical engineering who led the research. “We use low-cost, commercially available materials, and find that they perform very well.”

The mechanism works even in the middle of the day when cooling demand is highest, the researchers say. In outdoor experiments, the system cooled air by up to 6°C during the day and by 11°C at night. The team imagines placing many of these cooling devices on building roofs to cut air-conditioning use.