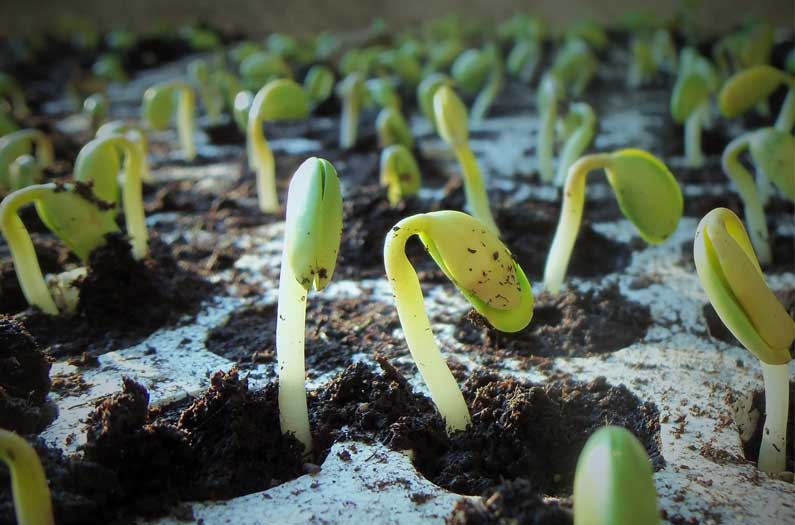 Transferring salt-loving bacteria onto crops could help them thrive in toxic soils.
By Emma Bryce
August 30, 2019

Researchers have produced plants that can withstand salty soil, a potential game-changer for global food security.

Their study, led by Brigham Young University in the United States, found that plants that were treated with a certain type of bacteria could grow healthily in soils treated with 1% salt – conditions that would kill or seriously undermine the growth of regular, untreated plants.

This is a boon, because around the world a dire combination of intensive farming practices and drought are making soils increasingly salty and unsuitable for crops. This new discovery could give plants a kind of armor against these hostile conditions, and boost food production.

To make their findings, the researchers took an ingenious approach: they turned to salt-loving plants from the deserts of Utah, called halophytes, for clues about how they survive. The roots of these short, scrubby plants are teeming with communities of bacteria that seem to enable them, in some way, to withstand the salty conditions of desert soils. So the researchers isolated 41 bacterial strains from the roots of three halophyte species, then cultured them in a lab so they could apply them to regular plants.

In this case, they tested the bacteria on alfalfa, a crop grown as feed for livestock, and the fourth largest crop in the US. They ‘inoculated’ alfalfa seeds with the bacteria, then under both lab conditions, and in the more realistic setting of a greenhouse, monitored the plants’ growth in soil that had been dosed with 1% salt.

They found that untreated plants grown as a control in these saline soils grew to be small, withered, and pale. By comparison, the inoculated alfalfa seeds grew into noticeably higher and denser plants, with longer shoots and roots – essentially developing into what appeared to be regular, healthy crops, despite the hostile conditions.

The discovery is especially important if you consider that the global area of salty soils is growing. This problem is especially prominent on irrigated land, because soluble salts present in the water get deposited in the soil, and accumulate over time. The problem is worsened by drought, which increases water use and speeds up evapotranspiration, leaving more and more salt behind in the soil for crops to grapple with.

While only 15% of the planet’s  agricultural land is irrigated, that land provides 40% of the food we eat. And, it’s estimated that about half of that irrigated soil is affected by salinity. So its toxic effects imperil a huge chunk of the global food supply – and create a problem that needs solving, fast.

The idea that salt-tolerant bacteria could successfully populate and protect the roots of regular crops, therefore, is the beginnings of a solution to this seemingly intractable problem.

It could also be a win-win for farmers and the environment – enabling farmers to continue growing economically on one patch of land, instead of expanding into virgin habitat in search of healthier soils.

Already, the researchers have started testing their findings on food crops including rice and lettuce. Next, they’ll be taking their experiments out into the farm field. “With what we’ve found, lands that are now unable to sustain plant life due to high salinity could once again be used for crops,” the researchers say.