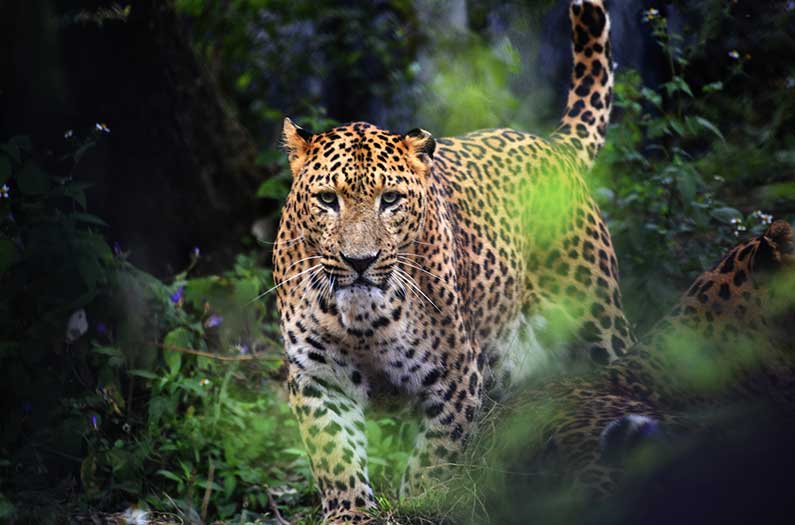 Coexistence isn’t just about science and self-interest. It’s about stories, too.

In parts of northern India, leopards thrive—not because they're protected, but because people regard them as fellow persons, allowing a culture of coexistence to flourish.
By Brandon Keim
August 7, 2019

When people and big, potentially dangerous predators share landscapes, it’s usually the predators who lose. People fear them and the harms they cause, and calm their fears by killing. Yet in the northern Indian district of Hamirpur, on the western slopes of the Himalayas, both people and leopards thrive.

It’s not because protected areas shelter the big cats; there are none. The animals live entirely in multi-use landscapes. Neither is it because leopards don’t attack people; they do. Instead the acceptance is rooted in a culture where leopards are regarded as fellow persons, allowing a culture of coexistence to flourish.

“People in the landscape relate to leopards with an underlying belief that leopards are thinking beings,” write researchers led by Dhee, a conservation psychologist with the Wildlife Conservation Society, in the journal People and Nature. The people they spoke to “generally viewed leopards as complex individuals with whom they could ‘negotiate’ the sharing of space.”

It’s not the sort of language that’s typically associated with conservation, nor with scientifically-informed ways of thinking about nature. For most of the last several centuries, scientists have assembled a view of animals as unthinking and instinct-driven—a view that contemporary research on animal intelligence is fast eroding, though application of those insights tends to lag outside the context of domestic animals.

In the grand sweep of human history, though, recognition of animal intelligence and personhood is the rule rather than the exception. In Hamirpur as in many places, people never stopped feeling that way; those attitudes survived even as other aspects of society became conventionally modern. They may shape how people handle tensions usually framed in terms of ecology and socioeconomics alone.

“Understanding these complex human–human and human–wildlife relationships is essential,” write Dhee and colleagues, “because humans predominantly determine the fate of wildlife.”

Dhee’s team conducted 23 ethnographic interviews with residents of Hamirpur, where leopards “have been a constant presence in the region as far back as people remember and have been known to visit villages sporadically,” and remain a fact of everyday life. According to government records, 74 leopard attacks on humans—three of them fatal—were documented between 2004 and 2015, as well as 239 attacks on farmed animals.

The researchers talked to shepherds, loggers, and local villagers, asking about their experiences with and narratives of leopards. Everyone they spoke to had interacted with them; these encounters shaped their knowledge, which can be understood not as superstition but as produced by intimate experience and observations of leopard behavior.

Common themes emerged. Non-aggressive encounters were the norm. Media accounts might describe leopards as fearsome man-eaters, but people in Hamirpur knew them to be shy, elusive, and clever. They could become aggressive, but this was attributed to people interfering with their hunts.

This view “removes the ‘blame’ of the attack from the leopard,” write the researchers, locating the reasons not in the leopard’s violent nature but “the action of the human and specific circumstances.” If leopards attack livestock, people in Hamirpur do try to frighten them off—not as a form of conditioning, but as a way of sending a message.

“Our participants consider leopards to be ‘actors’ rather than objects,” the researchers write. “Speaking to the participants introduced us to the leopard, not as a wholly instinct‐driven creature but as a thinking being with whom they constantly negotiate space and access to shared resources.”

Dhee’s team also encountered a widely-told myth about how a domestic cat had taught leopards how to catch prey by the neck. In that story, the cat is personified as the leopard’s aunt, specifically the younger sister of his mother—a relationship that, in the context of family-centered Indian society, is important.

“These relations ascribe a system of interconnectedness between the beings that the people share their space with,” they wrote. “It shows a belief that species barriers are permeable,” and that close relationships and communication can exist across species lines.

More modern myths existed, too: that leopards now living in Hamirpur had been released by the government forestry agency in order to frighten villagers and discourage illegal logging This is not the case, but the story is widely believed and the supposed zoo-raised origin of the leopards is also invoked as explanation for attacks on humans.

Despite this, the supposedly transplanted leopards are still accepted. Rather than taking out their resentments of authority on leopards—as often happens elsewhere, such as with wolves in rural North America and Scandinavia—people tolerate them, perhaps because they regard the cats as fellow persons.

In the case of wolves, people who persecute them frequently do recognize their agency and intelligence. Other cultural circumstances differ, though. Often wolf conflicts occur in regions recently re-colonized by wolves after decades or centuries of absence. “People have not lived with these animals,” says Vidya Athreya, an ecologist with Conservation India and co-author of the new study. They become fearful and react differently than “people who have historically and culturally have these animals present in their mind space.”

How the attitudes of people in Hamirpur will survive into the future is an open question, says Dhee. At present, it seems that the usual ways of dealing with human-leopard conflict—trapping and killing the offending animal, paying the injured parties—might benefit from considering broader social currents that shape human-leopard relations. And perhaps similar attitudes in other cultures might be embraced or nourished where they don’t now exist.

“Perhaps by identifying the mediums through which narratives travel elsewhere in the world and recognizing and re-imagining the ways in which these species are being portrayed, new narratives that align with conservation goals can be produced,” Dhee says. “But whether they can be as pervasive and effective as myths that have evolved through several generations and entrenched in a community’s cosmology, only time can tell.”

Source: Dhee et al. “The leopard that learnt from the cat and other narratives of carnivore–human coexistence in northern India.” People and Nature, 2019.