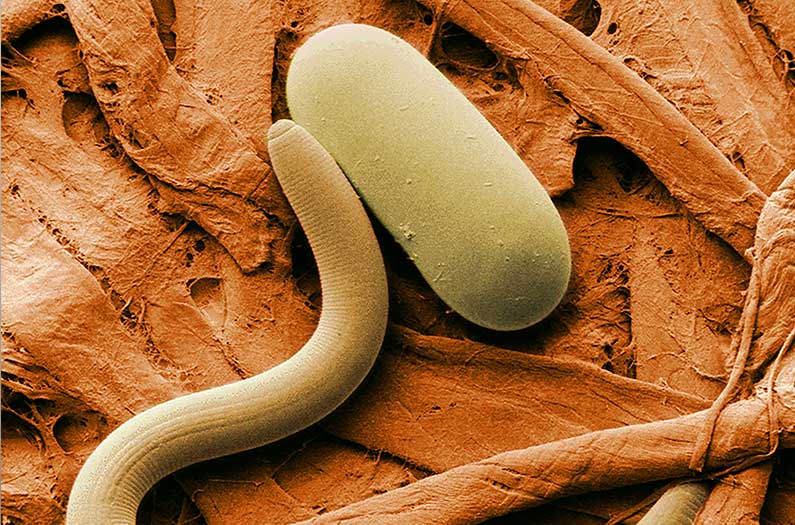 This parasitic worm might hold the key to sustainable pesticides

Nematode worms cause billions of dollars of agricultural damage each year. But they produce a compound that conversely could actually protect crops against disease.
By Emma Bryce
August 16, 2019

A parasitic worm that causes billions of dollars of crop damage annually, could actually make plants more resilient in the face of disease, a new study finds. Using chemical compounds secreted by this parasite, the researchers on the new paper think they might be able to develop a sustainable pesticide for some of the world’s biggest crops, such as soybeans, rice, and wheat.

The parasites in question – nematodes also known as roundworms – produce a pheromone called ascaroside, which they use for communication between one another. The team of international researchers had carried out previous studies that showed that in the presence of this compound, plants increase their immune response – most likely as a hardwired defence mechanism against the parasites, which typically infest the soil around their roots.

In their recent Journal of Phytopathology study, the researchers isolated the ascaroside compound, and applied it to test plants of four major crops: soybeans, rice, wheat, and maize. When they then infected those treated plants with a range of fungal, bacterial, and other plant diseases, they discovered that overall, these plants were more capable of fighting off threats.

In rice, for instance, the pheromone treatment reduced the effects of a particularly damaging bacteria, which has been known to kill up to 50% of rice crops in Asia. In soybean plants, ascaroside helped the plants ward off the damaging Mosaic Virus, as well as strains of bacterial blight. Treated wheat plants were more resistant to two prominent types of fungus that affect crops globally.

When these results were combined with the researchers’ previous investigations on barley, potato, tomato, and thale cress plants, they found that the worm pheromone boosted plants’ resistance to an impressive 15 out of 16 major plant pathogens and pests, overall.

It’s thought that the presence of the worm’s pheromone essentially primes the crops’ immune systems, making them more alert to incoming threats, and more capable of mounting a stronger defence. While the study found that ascaroside treatments couldn’t provide complete protection against every pathogen the crops faced, the researchers think that the partial protection it does offer could, however, significantly reduce the amount of pesticide applied to crops, overall.

The discovery is part of a new trend in agricultural research to find ways of developing crops that have in-built resistance to pests – including, for instance, the breeding of genetically-resistant plants. The particular benefit that this new research has to offer is that the treatment that’s applied to the plants is completely natural. So, while it functions like a pesticide, it won’t unintentionally damage the wider environment, which is the major caveat of applying pesticides to crops.

The hope is that with further development, the ascaroside treatment could provide crops “with more environmentally friendly protection against pests and pathogens,” the scientists reason.

They’re well on their way to that goal. Some of the researchers on the paper have launched a startup company to commercialize their discoveries, and now they’re investigating whether seeds treated with the worm pheromone will grow into plants with stronger immune systems, from the get-go.