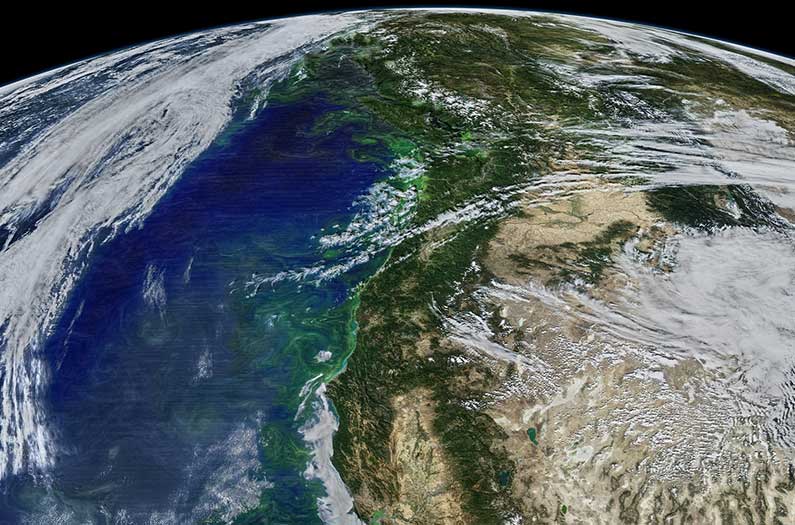 While we debate geoengineering the ocean, it seems we’re already doing it

Like other forms of geoengineering, oceanic iron fertilization is controversial. So it’s a bit unsettling to realize that this process might already be happening, albeit unintentionally.
By Sarah DeWeerdt
August 6, 2019

Human activities such as industry and fossil fuel burning are likely contributing extra iron to some parts of the world’s oceans, according to a study published June 14 in Nature Communications.

Iron is an important nutrient for the growth of phytoplankton, tiny single-celled plants at the base of the ocean food chain. But iron is not very soluble in seawater and tends to be scarce in marine environments; the lack of this element limits phytoplankton growth in up to one-third of ocean waters worldwide.

These observations have led to proposals to “fertilize” the ocean with iron to stimulate phytoplankton growth. The idea is that the increased phytoplankton growth would remove some of the excess carbon dioxide we’ve released into the atmosphere, and thus help to mitigate climate change.

Like other forms of geoengineering, oceanic iron fertilization is controversial. So it’s a bit unsettling to realize that this process might already be happening, albeit unintentionally.

Researchers in the United States analyzed iron in air samples collected on a research cruise in the North Atlantic Ocean. They used stable isotopes—forms of the same chemical element with different atomic weights—to discern the signature of different sources of iron.

Iron in ash from fossil fuel burning or other human activities is known to be isotopically lighter than the iron in airborne dust. This dust, carried on the wind from desert regions, is a primary natural source of iron in the world’s oceans.

The researchers also assessed how easily the iron in the samples dissolved in seawater. Iron resulting from human activities is known to be more soluble than natural iron from desert dust.

Iron in air samples from regions influenced by a well-known plume of dust from the Sahara Desert has an isotopic fingerprint and solubility similar to that of the Earth’s crust, the researchers found. All that is as expected.

But air samples collected near North America and Europe appear to contain two different fractions of iron: one similar to the iron derived from desert dust, and one that is lighter and more soluble. The researchers suggest that this second fraction is likely to be the result of human activities. Based on the time of year the samples were collected, they say, it probably reflects burning of fossil fuels.

At least half and possibly close to all the soluble iron in European and North American air masses derives from human activities, they calculated. This means that the iron available to phytoplankton in some open-ocean regions of the North Atlantic could already be mainly anthropogenic.

A comparison between existing models of dust deposition on the oceans and the analysis of the new samples suggests that these models have been overestimating the solubility of dust-derived iron and underestimating the amount of anthropogenic iron reaching the oceans.

It’s not yet clear exactly how much iron from human activities is entering the ocean, or how it might be affecting phytoplankton growth. Still, the results are a good reminder, as we contemplate multiple forms of geoengineering, that human activities often come with unexpected consequences.

Image: Phytoplankton bloom off the West Coast of the United States. Credit: NASA via Flickr.