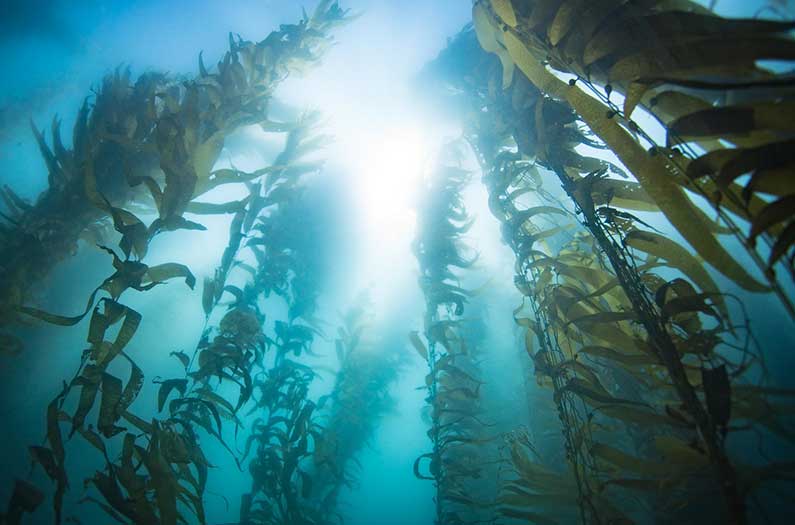 How seaweed farming could help to offset agriculture’s emissions

Seaweed could play a considerable role in fighting climate change: so says a new study which finds that cultivating lush expanses of seaweed off the coastlines of the world could sequester huge amounts of carbon, and even offset a portion of agriculture’s vast emissions.

Published in Current Biology, the study found by analysing coastal habitats worldwide, that an expansive area of coastline – 48 million square kilometres – would be suitable for global seaweed production. If we farmed even just a tiny fraction of that area – 273 square kilometres, or 0.001% – the growing seaweed would lock enough carbon to offset the emissions of the entire aquaculture sector.

That’s significant, when you consider that aquaculture is now the fastest-growing food sector, and accounts for 50% of all seafood production. So the importance of seaweed as a mitigation tool in this industry would likely grow.

When the researchers evaluated seaweed’s potential to offset the emissions of global agriculture as a whole, the benefits weren’t quite as striking. The growing constraints of seaweed – certain temperature and nutrient requirements – together with the cost of production, makes it unlikely that we’ll be able to farm enough seaweed globally to counteract the roughly 18% of anthropogenic emissions that agriculture generates.

However, the researchers did find that when measured at regional scales, seaweed could prove itself highly valuable as a mitigation tool. For instance, in parts of Asia where seaweed farming is already underway, setting aside some of that farming area purely for carbon sequestration could push nations towards achieving their emissions reduction targets, the researchers posit. Zooming in even more, they found that in California, devoting just 3.8% of the extensive coastline to seaweed cultivation could lock enough carbon to completely neutralize the state’s agricultural emissions.

Currently, seaweed is farmed mainly for bioenergy, for use in cosmetics, and for making food additives. This study is among the first to offer a global picture of seaweed farming purely as a climate mitigation tool.

Previous research has shown that seaweed locks carbon in its fronds, which then degrade and sink into the deep ocean, where the carbon gets stored indefinitely. Yet when we talk about offsetting carbon emissions, we typically focus on land-based methods, like planting trees. As land area becomes increasingly limited, however, offshore zones will offer more opportunities for sequestration.

There are benefits to seaweed cultivation beyond carbon offsets as well: dense forests of seaweed can create crucial habitat for marine animals, combat ocean acidification, and hypoxia – low oxygen waters. In fact, the researchers found that 77 of the countries they identified with suitable seaweed-growing habitat have acidic seas, and another 27 had hypoxic waters – conditions that seaweed could potentially remedy.

While the researchers acknowledge that seaweed is unlikely to make a huge dent in global emissions, they also suggest that we recognize what it can do – which is make a considerable impact at local scales. They also point out that it’s just as powerful a mitigation tool as many others we have already adopted in the fight against climate change. “The urgency of climate mitigation demands use of every possible tool available,” they assert.

If policymakers take seaweed seriously, our future efforts to offset carbon might involve planting forests of a very different sort.