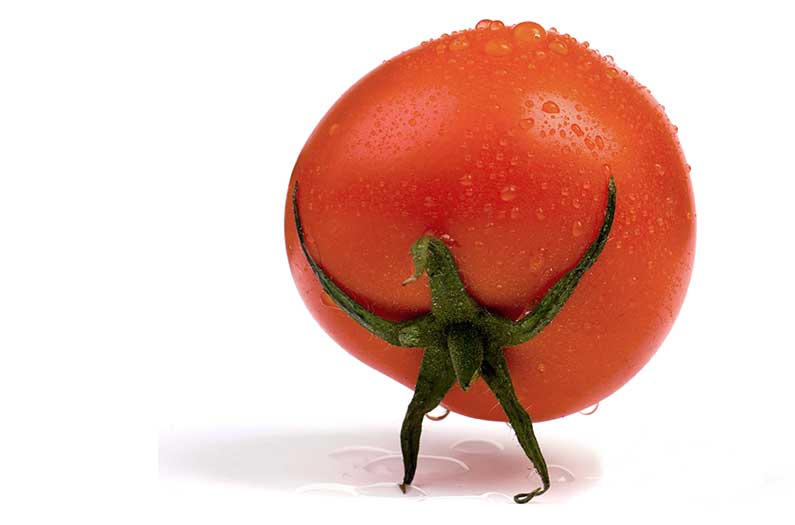 Building a tomato that stands up to salty soils

Researchers discover that certain microbes have a surprising ability to shield crops against saline soils.
By Emma Bryce
October 25, 2019

A particular type of fungal microbe, applied to the roots of tomato plants, could equip them to grow healthily in salt-ridden soils.

It sounds counterintuitive, but these results from a recent study published in the journal Scientia Horticulturae signal a potential boon for crops across the planet that are pressured by climate change.

The researchers on the new study investigated the effects of Piriformospora indica, a beneficial fungal soil microbe known to symbiotically colonise plant roots; previous studies have also suggested it could play a role in making plants salt-tolerant.

So, using tomatoes as test plants, the research team found that those showered with salty water coped significantly better – growing larger, and branching more – if they were planted in soil laced with the fungus. In fact, those fungus-boosted tomatoes produced 65% more fruit, compared to tomatoes that were exposed to salty water, but grown in regular soil, the researchers found.

Having these microbes in the soil even appeared to benefit plants that weren’t subjected to high doses of salt: tomatoes showered with fresh water, but also with P. indica applied to their roots, produced 22% more fruit than regular tomatoes whose soil lacked the fungal benefactors.

The mechanism behind this fungus-driven phenomenon seems to be that the presence of these particular microbes in the soil aids the production of detoxifying enzymes in plants – whose job is, fortuitously, to remove excess sodium from the plants’ cells. Indeed, the researchers found that tomato plants colonized with the P. indica had much higher levels of this enzyme activity, compared to other plants.

They also revealed that these boosted tomatoes had more consistent levels of the macronutrient, potassium, due to the fungus. That might explain why even the plants that weren’t showered with salt, but were rooted in fungal soil, grew larger and produced more fruit. The fungally-colonized tomato plants also produced denser, larger roots, which the researchers think might improve uptake of water and nutrients from the soil, thus generating healthier plants, overall.

It’s not just tomatoes that could benefit from the addition of this unique class of microbes to agricultural soil.

Salty soils can undermine the growth of many crops, including staples like rice and wheat. And that’s a reality we’re going to have to grapple with more and more, as experts predict that by 2050, half the world’s cultivated land will be problematically salty – triggered by a combination of rising sea levels, increasing droughts, and other factors linked to climate change.

But as the new research shows, investing the soil with microbes might at least be one way to arm crops against these symptoms of a changing planet – and to enable our food system to adapt along with it.