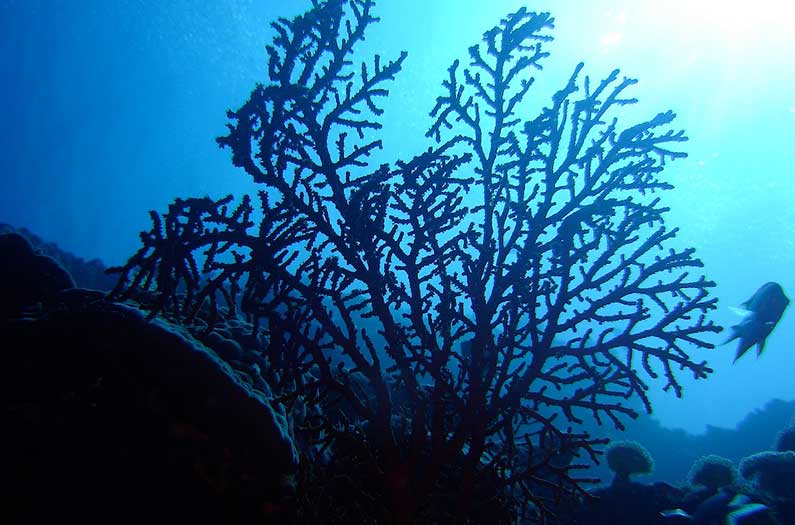 Light pollution could cause problems for coral reefs

People know that coral reefs are threatened by rising temperatures and acidifying water. But might artificial lights be causing problems, too?
By Brandon Keim
October 16, 2019

People know that coral reefs are threatened by rising temperatures and acidifying water. But might artificial lights be causing problems, too?

Certainly they’re known to affect animals, often in problematic ways: confusing hatchling sea turtles, disorienting migrating birds, disrupting the circadian rhythms of nocturnal mammals, and so on. Yet when it comes to corals, the impact of light pollution “remains largely unexplored,” write researchers in the journal Global Change Biology, despite the potential for disruption to processes “on which corals depend for their reproduction and survival.”

That corals could be vulnerable to artificial light should come as no surprise. Though many people think corals are plants, they’re actually animals; reef structures are agglomerations of hundreds or thousands of soft-bodied coral polyps who’ve clumped together and extruded limestone exoskeletons. And as the researchers—led by Inbal Ayalon and Oren Levy, both biologists at Israel’s Bar-Ilan University—point out, corals “depend on lunar illumination cues to synchronize their biological rhythm.” Moonlight governs their physiology and behavior and reproduction. It’s all too easy for artificial wavelengths to mimic that orb’s light.

Ayalon and Levy focused on Acropora eurystoma and Pacillopora damicornis, two coral species commonly found in the Gulf of Aqaba in the Red Sea. The Gulf “is undergoing urban development that has led to severe light pollution at night,” they write; to investigate its potential impacts, they raised corals in submerged outdoor aquaria, with some receiving additional nighttime illumination from LED light strips that mimicked the glow cast upon Red Sea coastlines by surrounding cities.

The impacts were significant. Corals exposed to artificial light had higher levels of so-called free radicals, or chemically-reactive forms of oxygen that cause damage to DNA, proteins, and cellular structures. Algae populations living symbiotically inside the corals fluctuated abnormally. Their rates of photosynthesis declined.

All this “sheds light on the emerging threat” of light pollution to corals, concluded the researchers. And though they didn’t investigate how the disruption affected their corals’ reproduction, and caveats necessarily apply to observations drawn from experimental rather than real-world settings, the findings resonated with other recent research on Red Sea corals.

Read:  How much can e-bikes reduce carbon emissions?

Published in Science by zoologists Tom Shlesinger and Yossi Loya of Tel-Aviv University, that study found dramatic shifts in breeding patterns since the 1980s. Back then, each species spawned in a precise choreography dictated by temperature, daylight patterns, and lunar cycles. Now three of five species studied by the researchers have become unmoored, their spawning no longer connected to those natural cycles—something that “reduces the probability of successful fertilization,” they wrote, “which may drive aging populations to extinction.”

Shlesinger and Loya pointed to light pollution as one of several possible culprits. If so, it might not just be a Red Sea problem; as Ayalon and Levy’s team notes, artificial light pollution affects some 22 percent of global coastlines.

There may be solutions at hand, though. When Ayalon and Levy repeated their experiment using yellow, blue, and white LEDs, they found the impacts of yellow light to be less extreme. Perhaps more coral-friendly lights could be used in seaside regions. Better yet, people could find ways to give corals the darkness they need. “The ability of organisms to rapidly adapt to the introduction of artificial light at night,” write Ayalon and Levy’s team, “is likely to be far more limited than for climate warming”—but unlike fossil fuel pollution, it’s fairly easy to turn down the lights.