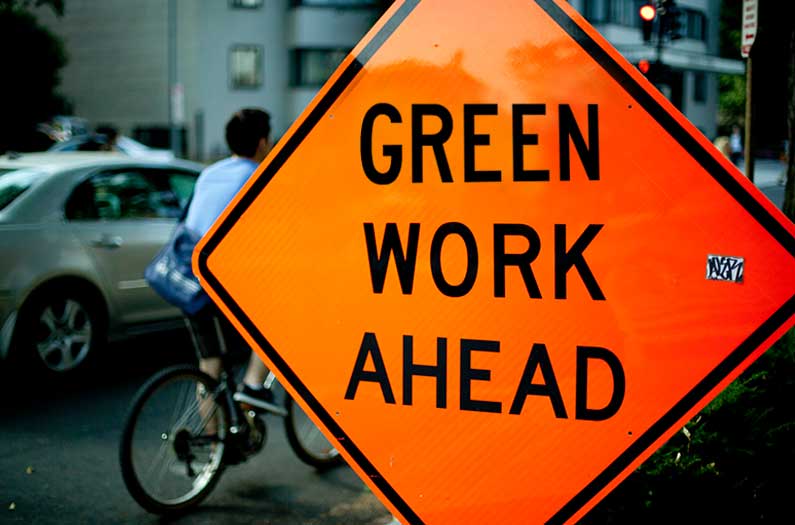 The United States leads the global green economy. For now.

The green economy employs 4% of working-age people in the United States and is worth $1.3 trillion per year, according to a new analysis. That’s 16% of the global green economy, the largest share of any single country.
By Sarah DeWeerdt
October 22, 2019

The green economy employs 4% of working-age people in the United States and is worth $1.3 trillion per year, according to a new analysis. That’s 16% of the global green economy, the largest share of any single country.

However, other countries are poised to develop and expand their green economy, meaning industries and activities that are low-carbon, environmentally friendly, and socially inclusive, the researchers report in the journal Palgrave Communications.

Geographers Lucien Georgeson and Mark Maslin of University College London used a big-data process that “triangulates” between a variety of sources and types of data to reach the best estimate of green economy sales and employment across the supply chain.

Their method represents a way to organize and analyze disparate data when government statistics about an economic sector are not available. It also facilitates comparison across countries. The approach has been used in a variety of studies related to green energy and climate change adaptation and mitigation in recent years.

The data concern 3,800 different goods and services across 26 different economic sub-sectors ranging from environmental monitoring to carbon finance to wave and tidal energy.

Each of the results is based on at least 7 different sources; the average is 56.

The green economy in the United States employs the equivalent of almost 9.5 million workers, the researchers found. Both employment and sales in the green economy grew by more than 20% between 2012-13 and 2015-16. Currently the green economy accounts for about 7% of U.S. gross domestic product (GDP).

China has a similar number of green economy workers as the United States, but this represents a much smaller percentage of its workforce. Green economy sales per capita are higher in the United States than they are in China, the G20 nations (consisting of 19 large-economy countries plus the European Union), or the OECD (a group of 36 mostly high-income countries).

However, China has said that it plans to add 13 million clean energy jobs by 2020 and aims to become a global leader in this area. The United States “needs to develop energy, environmental and educational policies to remain competitive,” the researchers write.

Similarly, the “America First Energy Policy” Trump proposed during the 2016 campaign aimed to expand the fossil fuel sector by an average of $23 billion per year. But according to the new analysis, green economy revenue is already increasing by over $60 billion per year.

In light of such trends, policies to prop up the fossil fuel industry don’t make much economic sense, the researchers argue.

Source: Georgeson L. and M. Maslin. “Estimating the scale of the US green economy within the global context.” Palgrave Communications 2019.